Why I’m So Bullish On China

I was discussing investments with a friend of mine the other day, and he asked me for recommendations because he was concerned about the valuation levels of US market. He didn’t like gold, so I asked him if he had any international investments, and he replied “not enough”. I told him to take a look at the SPDR S&P China ETF (NYSEARCA:GXC). Boy, did that ever get a negative reaction! After he finally calmed down, I said, “look, investing is about making money, and I think the China economy is bouncing back from the coronavirus, is much stronger than the US economy, and that is unlikely to change any time soon”. He asked me what evidence I had that China is bouncing back stronger than the U.S., and this is what I told him.

In June, Reuters reported that Chinese oil demand had bounced back to 90% of pre-COVID-19 levels by the end of April and was moving higher, according to Jim Burkhard, vice president and head of oil markets at IHS Markit. 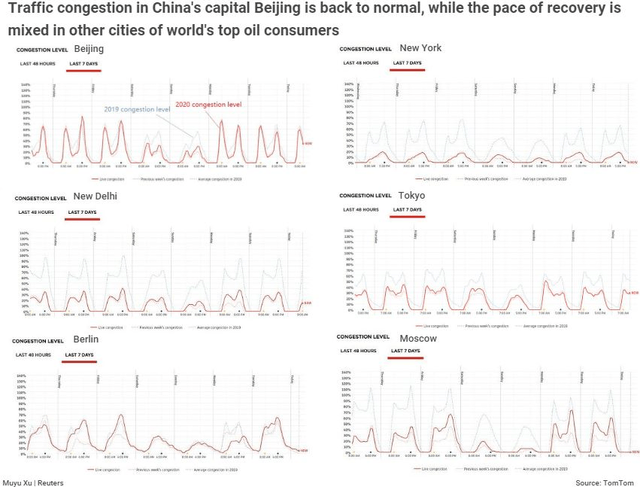 While there were rumors that much of China’s oil imports were going into storage, data shows (see above graphic) that traffic patterns in Beijing had returned to 2019 levels – an indicator that economic activity had resumed to normalcy in China’s second largest city.

CNBC recently reported that – for the first time in history – the Q3 CNBC Global CFO Council survey showed that global CFOs have a more positive outlook for China’s economy than they do for the economy of the United States. The CFO Council survey gave an average outlook of “Stable” for China’s GDP, while the U.S. economy was characterized as “Modestly Declining” for the second straight quarter. 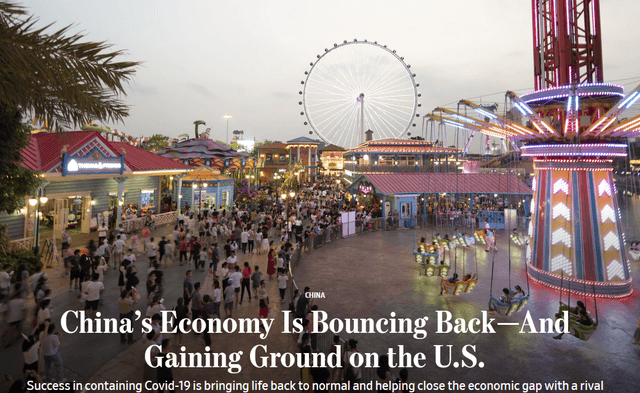 Last week, the Wall Street Journal reported that J.P. Morgan recently boosted its 2020 China growth forecast to 2.5% from 1.3% in April. World Bank economists also upgraded their forecasts for China – the only major economy expected to grow this year. Meanwhile, economists expect the U.S. economy could shrink by as much as 8.0% this year.

Chinese officials are no doubt highly cognizant of EV maker Tesla’s (TSLA) high-profile optics and are likely doing everything possible to ensure the success of Tesla’s “Gigafactory” near Shanghai. Most investors know that it was only last December when Tesla delivered its first “Made In China” Tesla Model 3 Sedans. The effect was immediate: in its Q2 presentation, Tesla said the Model 3 received strong support in China and is now the best selling EV.

Construction for Model Y lines in the Shanghai factory is progressing as planned – first deliveries are expected in 2021. Last week, Benzinga reported Tesla is hiring an additional 1,000 workers at the China Gigafactory as it expands to support the Model Y production lines. Tesla is hiring hundreds of motor shop, general assembly, bodywork, and logistics employees as well as operators and technicians for die casting machines.

On the Q2 conference call, Tesla CEO Elon Musk was asked about the competence and eagerness of Chinese suppliers. Musk said:

Yes. I will say it like this. The suppliers in China have been extremely competitive, possibly the most competitive in the world. 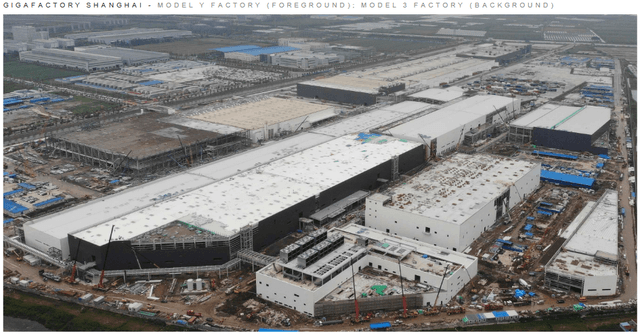 It likely no coincidence that Tesla’s meteoric stock rise came not long after the opening and proven success of its China “Gigafactory” (shown above). No doubt Chinese officials will use this success story to impress upon global manufacturers that – despite the US/China trade war – China is open for business and has the workers and infrastructure to support large-scale manufacturing facilities. In short – Chinese policymakers are likely to highlight Tesla’s success in China to attract more foreign capital from non-US countries.

The Wall Street Journal reported Friday that Chinese state-owned companies, or SOEs, are borrowing less from U.S. bond investors because Asian investors flush with dollars means the region can be more self-reliant for hard-currency funding: 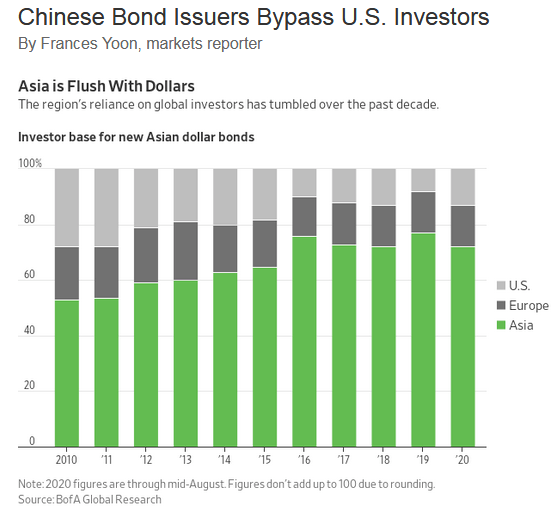 According to BofA Securities data through mid-August, U.S. buyers took up just 11% of this year’s Chinese dollar bonds by value. That’s down from 20% last year. For Chinese SOEs, the figure dropped to 4%, from 10% last year and 15% in 2018. What this means is there is growing demand from Asia investors and that many Chinese SOE issuers are no longer relying on, or requiring, U.S. investor involvement in order to get the best price.

My favorite investment for a direct bet on the Chinese economy is the State Street SPDR S&P China ETF. The GXC seeks to generally match the total return performance of the S&P China BMI Index. The BMI Index is a market-cap weighted index designed to define and measure the universe of publicly traded companies domiciled in China that are available to foreign investors. 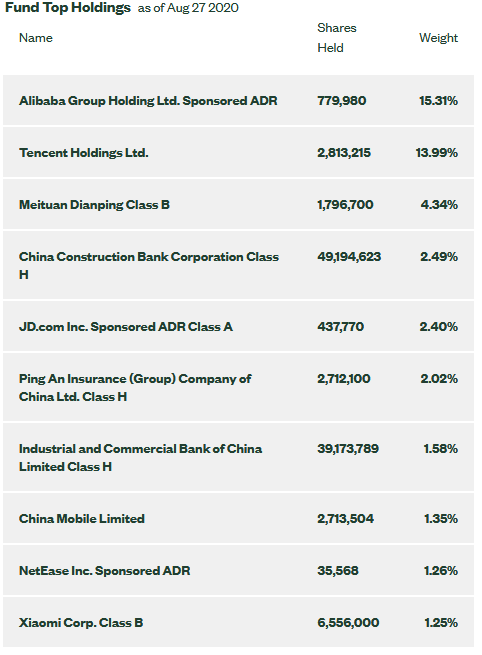 Specifically, I wanted exposure to Alibaba (BABA) and Tencent (OTCPK:TCEHY), both of which have performed very well over the past couple of years, while displaying excellent growth. I also like the exposure to China Mobile (CHL) for the upcoming acceleration of the 5G roll-out, and wish GXC’s weighting was a bit more into the stock. And of course, the exposure to industrial and construction companies is also desired.

As the US$ continues to weaken, I would expect GXC to get a foreign currency kicker for US investors. Yes, a lower US$ makes its exports cheaper. But China still runs a trade surplus with the US, so the more important factor is that the value of the Chinese companies listed above will increase as the US$ goes down.

The stocks held in the GXC ETF will not be immune to a steep market sell-off in US because, let’s face it, market psychology is just as contagious as the coronavirus and transmits even faster, despite you wearing an N-95 mask.

The US/China trade war is likely to continue on the front-burner heading into the November election. This could negatively affect some Chinese companies, but it is also true that it could negatively affect American companies as well. A case in point is U.S. company Qualcomm (QCOM), which has warned that it could potentially lose billions of dollars in sales on 5G smartphone components due to export limits on Chinese company Huawei. Meantime, note the Seeking Alpha report that China has announced new restrictions on artificial intelligence technology exports that could complicate the sale of TikTok’s (BDNCE) U.S. operations even more than they already are.

An excellent article for further reading on this subject can be found in this week’s Barron’s: Investors, Companies Are Prepping for More Angst in US/China Relations.

Meanwhile, when it comes to making broad index-like investments (like the GXC ETF), I advise investors to simply ignore the US/China trade war headlines, but pay very close attention if investing directly in individual high-tech companies.

COVID-19 remains a risk, and a highly uncertain risk. Increasing infection and transmission rates in the China and/or the U.S. – the world’s top-2 economies – could negatively affect the companies in the GXC index due to supply chain disruptions and/or a reduction in consumer demand.

The coronavirus hit the Chinese economy first. The country’s success in containing the virus has enabled its economy to bounce back much faster than the US economy. In general, Asian countries – where wearing a mask during flu season and pandemics has been the norm for many years before COVID-19’s arrival – are in better shape as compared to the U.S. when it comes to mitigating the impact of the virus. As a result, US investors should allocate a portion of their portfolio to the region. GXC is an excellent choice.

Disclosure: I am/we are long GXC. I wrote this article myself, and it expresses my own opinions. I am not receiving compensation for it (other than from Seeking Alpha). I have no business relationship with any company whose stock is mentioned in this article.

Additional disclosure: I am an engineer, not a CFA. The information and data presented in this article were obtained from company documents and/or sources believed to be reliable, but have not been independently verified. Therefore, the author cannot guarantee their accuracy. Please do your own research and contact a qualified investment advisor. I am not responsible for the investment decisions you make.