What Makes This Recession Different From The Rest

In recent weeks, numerous commentators started to suggest the US and the world are entering a depression.

For some areas of the economy, that is clearly true. But not every area.

Part of the economy will be in what can only be described as a depression for quite some time.

My friend George Friedman of Geopolitical Futures defines depression as the physical destruction of the economy, something that lays waste to businesses, dislocates labor and vaporizes capital. A recession is the economy cycling. A depression is an economy breaking.

Another part of the economy will recover, albeit a little slowly, but faster than the Great Recession.

A recession, according to George, is a normal part of the economy—a primarily financial event that imposes disciplines on an overheated economy.

The picture should become a bit clearer in September.

George writes that, that unless a solution for the coronavirus and what it’s doing to our economy is found by September, the probability that the recession turns into a depression could mount.

“I chose September because two quarters of intense economic contraction is instructive. Economists’ definition of a recession is two successive quarters of negative growth (also known in English as decline). This is generally enough time to understand how resilient an economy is.

“Uncoincidentally, it is also the point at which economies begin to recover in normal cycles. Under normal circumstances, basic economic structures remain intact during recessions so financial stimulus measures can restart the system.”

The first four “depressions” were banking panics. But they were also associated with the agricultural cycle.

Farmers would borrow money in the spring and pay it back after the fall harvest. Money would move from money-center banks in the big cities, especially New York, to smaller banks out in the country. And then back.

Think “Sell in May and go away.” The money-center banks would have less money to lend for speculation during the summer.

This led governments and banks to create the Federal Reserve in 1913, to have a lender of last resort. Not long after, the US became less dominated by the agricultural cycle and more dominated by the manufacturing cycle.

As my friend Dr. Woody Brock says, when Henry Ford would lay off 10,000 workers, that also meant steelworkers, tire manufacturers in Akron, and so on were also laid off.

That percolated throughout the economy. And we got what we called the Great Depression. (I know this is a huge oversimplification: Herbert Hoover allowed Smoot-Hawley in 1930. He also raised taxes in the teeth of a depression/recession. Monetary policy was not helpful.)

Up until 2000, recessions were associated with the manufacturing cycle. But those became milder over time. That is because manufacturing had less of an impact on the economy.

The coronavirus impacted all parts of the economy. But how fast you see recovery, or how long you see depression, depends where you are and what part of the economy you are in.

Going into 2020, 85% of the US economy was in the service economy. The Great Recession was caused by financial excess, but we worked through it.

With the current crisis, something happened that never happened before…

We literally shut down 30% to 40% of the service economy. Wiped it out. Restaurants, hotels, gyms, airlines, tourism, all manner of personal services. The list can go on forever.

A member of the National Restaurant Association told me that, as things stand, some 30% to 40% of restaurants will likely close by year-end without further aid.

That could be a low estimate.

The Independent Restaurant Coalition conducted a poll by Compass Lexecon, a Chicago-based consulting firm. Their report predicts a grim future for roughly 500,000 (of 660,000) Main Street restaurants unless a more robust financial assistance program is established.

Yelp is a surprisingly good source for information on business closings. Some 55% of businesses that are listed as closed on Yelp have been closed for good. 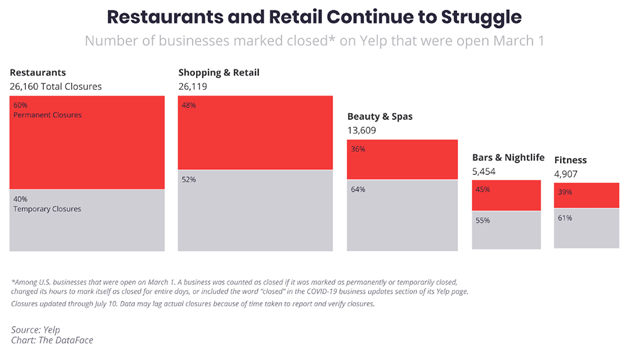 Half of hotel rooms in the US are empty as of mid-August. They need at least 80% occupancy to break even.

Hotels that depend on tourism? Toast. Airlines? The list goes on and on.

How fast you will see recovery … or how long you will see depression … depends a great deal on where you are and what part of the economy you are in.

Collectively, that means we’ll stumble into September. Then slowly but—as history has shown us, surely—we’ll stumble higher. It will be a lumpy, bumpy ride, but it’s already happening.

Disclosure: I/we have no positions in any stocks mentioned, and no plans to initiate any positions within the next 72 hours. I wrote this article myself, and it expresses my own opinions. I am not receiving compensation for it. I have no business relationship with any company whose stock is mentioned in this article.