Up On The Tightrope: Powell’s ‘Balancing’ Act

Tomorrow morning, Chairman Powell is scheduled to take center stage at the annual Jackson Hole conference. In the past, this appearance by the Chair of the Federal Reserve (Fed) has been of the “headline-making” variety, and it tends to be eagerly awaited by the money and bond markets. This time around is no exception, as the markets are anticipating some type of announcement, or perhaps “hint” is the better word, of what the Fed is contemplating regarding its policy framework review. At this point, the focus is on what, if any, adjustments could be forthcoming with respect to inflation targets and also on any potential thoughts regarding the Fed’s balance sheet. Given market expectations, Powell may have to engage in some sort of a balancing act.

Up to this point, the Fed has characterized the latest expansion of its balance sheet as being more “market-related.” In other words, the increased buying of Treasuries and mortgage-backed securities (MBS), as well as the implementation of a whole host of various facilities, has been designed to prevent market dislocations and avoid another financial crisis. There is a school of thought that believes the policymakers may want to shift their “mission statement” regarding the balance sheet and now place the emphasis on being a stimulus measure for the economy. Think of it as being akin to the prior episodes of quantitative easing (QE1, 2 and 3) we witnessed. 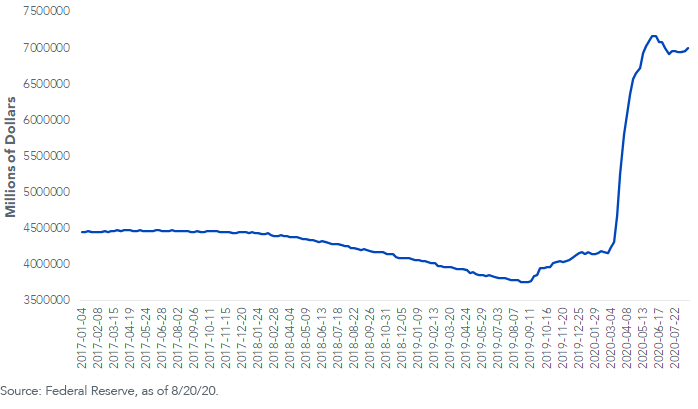 As the reader may recall, I blogged about the Fed’s balance sheet following the July FOMC meeting, but here’s a quick update. Between February 26 and June 10, total assets rose by an unbelievable $3 trillion. Since then, the balance sheet has actually shrunk by $158 billion, but total assets still stand at more than $7 trillion. In recent weeks, the trend has been relatively flat, suggesting that perhaps the “heavy lifting” has already taken place, or at least, that is the hope.

So, what’s a central banker to do? Based upon prior Fed commentary, the policymakers appear to be settling in on a plan to let the economy “run hot,” aka overshoot their inflation target. In addition, even though the money and bond markets seem to have “normalized,” the Fed can’t take away its aforementioned facilities too early. QE? Right now, there doesn’t seem to be a pressing need to alter the current state of purchases, and quite frankly, I’d rather have some arrows in the quiver in case they’re needed. As a result, barring any negative developments, perhaps $7 trillion is the appropriate number for the Fed’s balance sheet, at least for now.

Unless otherwise stated, all data sourced is Bloomberg, as of August 24, 2020.

As part of WisdomTree’s Investment Strategy group, Kevin serves as Head of Fixed Income Strategy. In this role, he contributes to the asset allocation team, writes fixed income-related content and travels with the sales team, conducting client-facing meetings and providing expertise on WisdomTree’s existing and future bond ETFs. In addition, Kevin works closely with the fixed income team. Prior to joining WisdomTree, Kevin spent 30 years at Morgan Stanley, where he was most recently a Managing Director. He was responsible for tactical and strategic recommendations and created asset allocation models for fixed income securities. He was a contributor to the Morgan Stanley Wealth Management Global Investment Committee, primary author of Morgan Stanley Wealth Management’s monthly and weekly fixed income publications, and collaborated with the firm’s Research and Consulting Group Divisions to build ETF and fund manager asset allocation models. Kevin has an MBA from Pace University’s Lubin Graduate School of Business, and a B.S in Finance from Fairfield University.