Trouble Ahead For The Biopharma Stocks

One of the distinguishing features of the equity market rally since March has been the leadership role of biotech and pharmaceutical stocks. Investors have been clearly enamored of this industry since the commencement of the race to develop a COVID vaccine. But as we’ll discuss here, cracks are beginning to appear in the edifice of the drug stock group. Here I’ll make the case that not only will these cracks likely expand in the coming weeks, but the increasing internal weakness in this industry may also contribute to a broad market correction this fall.

Before we discuss the danger faced by the drug stocks, it’s important that we understand what has been fueling the impressive gains in major indices lately. (For there’s a good chance, IMO, that the market’s present source of strength will also be used as a cover for the distribution now taking place within the biopharma industry.)

To say the least, the strength and persistence of the broad rally over the last several months has been quite astonishing. Indeed, many (if not most) investors would never have envisioned such a remarkable show of strength in the stock market when the turnaround commenced in March. Yet here we are nearly half-a-year into one of the most incredible equity market rallies in history!

In the early stages of the post-panic recovery, participation among different sectors and industry groups was fairly broad (excluding, of course, those industries which were directly impacted by shutdowns). But in recent weeks, the character of the bull market has become decidedly more exclusive as fewer stocks are making new 52-week highs.

Among the names that have continued to make new highs are tech sector stocks that specifically cater to the “work-from-home” paradigm. Most prominent on this list of leaders are the so-called “Fab Five” stocks: Apple (AAPL), Microsoft (MSFT), Alphabet (GOOG), Facebook (FB) and Amazon (AMZN).

Just how important are the Fab Five to this year’s bull market? As measured by the large-cap S&P 500 Index (SPX), the broad market is up around 10% for the year to date. Yet the five leading stocks are on a rip-and-tear and have significantly contributed to the relative outperformance of the NASDAQ Composite Index. Shown here is a graph of the Fab Five versus the rest of the market. 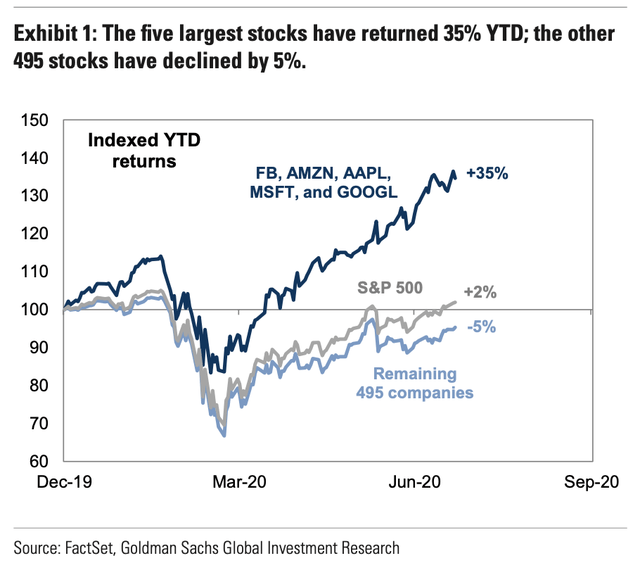 As you can see, the combined YTD percentage gain of the five leading stocks as of a month ago (+35%) far exceeds the S&P 500 (it’s even greater as of early September). In fact, removing the five leaders from the S&P 500, the remaining 495 companies were actually down 5% for the year as recently as early August. As Charlie Smith of Fort Pitt Capital Group noted, this chart “shows that just five companies account for more than 100% of the index’s gains for 2020 to date.”

Not since the tech bubble of the late 1990s has the S&P 500 been so dominated by a handful of richly valued glamour stocks.

Further expounding on the Fab Five, David Stockman, of David Stockman’s Contra Corner, made a rather prescient observation about the five most dominant market leaders worth quoting. He wrote:

Overall, the so-called Fab Five…reflect the same multiple inflation story; and they are obviously the pile driver that is pushing the heavily ETF and indexer-driven stock market up into the nosebleed section of history.

He added that around 50% of the S&P 500’s nearly $11 trillion market cap gain since June 2014 were due to the Fab Five’s outsized influence.

There’s no disputing the Fab Five are setting the pace right now for the large-cap major averages. There’s also no denying the observation that, “As goes the trend of the five leading stocks, so goes the rest of the market”—at least in the near term. For this reason, then, it’s important that we keep a close watch on the daily and weekly movements of these stocks for signs of a potential trend change.

Currently, all five stocks are above their 15-day moving averages and confirming that the dominant immediate-term (1-4 week) trend for the major averages is up. Moreover, most are within easy reach of a new 52-week high. Below is Amazon (AMZN), which is currently the top dog of the five leading stocks. 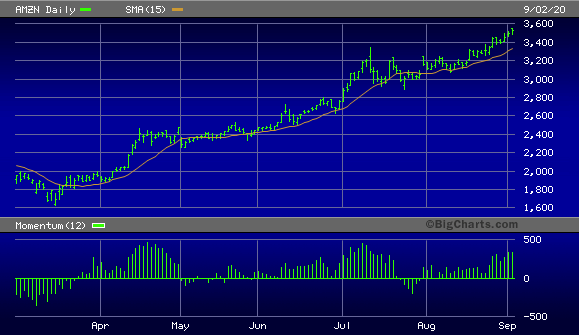 Despite periodic bouts of volatility, the five leading stocks have so far managed to keep above the 15-day line in recent weeks. Apple (AAPL) in particular has shown signs of recent volatility (below), but as long as it doesn’t close under the 15-day line on a weekly basis, the bulls will retain control of this stock’s immediate trend. And that means the bull market will continue, although narrowing leadership will likely become more of an issue as we head further into the historically volatile September-October period. 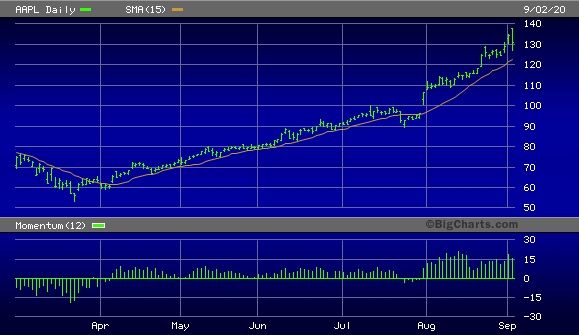 Of greater significance, the strength of the Fab Five could be used as a cover for any weakness just below the market’s surface.

With that said, let’s turn our attention to the drug makers. With each passing week it seems as if a greater number of pharmaceutical and biotech stocks are showing signs of being under selling pressure. Historically, whenever the number of stocks making new lows exceeds 40 it’s a sign that there is above-normal selling pressure somewhere in the market. And that “somewhere” is pretty easy to spot right now.

For the first time in recent memory, the number of Nasdaq stocks making new 52-week lows was above 40 on the first two days of this week. To be exact, there were 44 new lows on Sept. 1 and 49 new lows on Sept. 2, with 23 of those 49 lows encompassing (mostly smaller) biopharma companies.

A high-profile example of the relative weakness of one of the bigger names in this group would be the 15% drop in Gilead Sciences (GILD) in just the last few weeks. The firm is banking on the experimental drug Remdesivir, which has been used since 2015 against Ebola and which has also been used in China to treat COVID-19. Not only is Remdesivir in high demand right now, it’s also believed to be one of the best current options for treating the novel coronavirus and was recently granted emergency-use authorization from the FDA. Yet investors are clearly skeptical over Gildead’s prospects for (for yet unknown reasons), and it may be that Wall Street is factoring in a coming disappointment on that front. 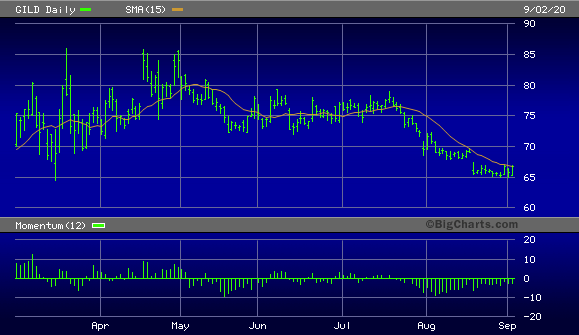 It’s also worth noting that the Invesco Dynamic Pharmaceuticals ETF (PJP), below, closed decisively under its 15-day moving average in late August—thereby confirming an immediate-term trend reversal—and is struggling to get back above it. While it’s possible that PJP may soon recover above its 15-day line on a weekly closing basis and thereby confirm another immediate-term “buy” signal, the fact that this ETF is conspicuously lagging the major averages is a clear sign that the biopharma group is struggling (even though a few well-known biopharma names are still relatively strong). 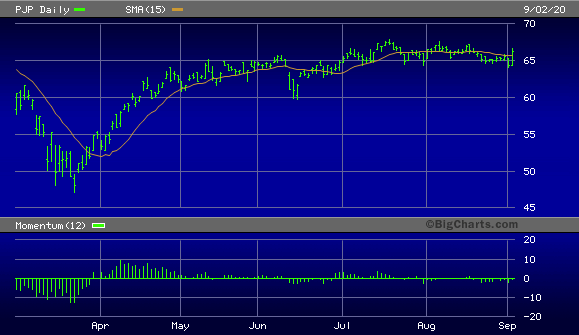 However, a sharp drop below the 64 level in PJP (the nearest pivotal low) would likely inspire some additional programmatic selling pressure in PJP. Investors should thus monitor this ETF closely in the coming weeks, especially since it’s likely that the next broad market correction will be heavily influenced by drug stock weakness.

I would also point out that the broad market’s last major decline, which began in February, was preceded by several weeks of the biopharma stocks contributing heavily to the new 52-week lows on the Nasdaq. History doesn’t always repeat precisely on Wall Street, though it often rhymes. The fact that so many biopharma names are popping up on the Nasdaq new lows list of late is disconcerting—especially since some of the market’s gains since the March bottom were due to drug stock strength.

Please don’t misconstrue this message. Unlike many analysts, I’m not predicting a market crash anytime soon, though I do suspect there will be heightened market volatility heading into the November election. I also don’t recommend selling the biopharna industry short, since there’s still some leading biotech and stocks in this group which are outperforming. But it looks like the internal weakness I’ve been noticing in this industry in the last few weeks is starting to put cracks in the surface of this popular segment.

More importantly, if those cracks begin to spread to other industries, then the general market will become increasingly vulnerable to selling pressure this fall. Accordingly, I recommend holding off initiating any new long positions in the biopharma stocks until the new lows in this group dry up.

In closing, while the immediate-term trend of the major averages is still pointed up (thanks largely to the “Fab Five”), there’s an undercurrent of weakness among several biotech and pharmaceutical companies. While a bullish broad market stance is still justified, investors should proceed with caution where the biopharmas are concerned. Based on the evidence discussed here, I recommend holding off on buying drug stocks for now and keeping a tight leash (i.e. stop loss) on any biopharma stocks in your portfolio.