This quarter, Southeastern’s 13F portfolio value decreased ~5% from $4.2B to $4B. The number of holdings decreased from 31 to 28. The top three holdings are at ~31% while the top five are at ~44% of the 13F assets: CenturyLink, CNX Resources, FedEx, Mattel Inc, and General Electric.

Southeastern is best known for its investor friendly attributes. The mutual funds in the Longleaf family are Longleaf Partners Fund (LLPFX) incepted in 1987, Longleaf Small-Cap Fund (LLSCX) incepted in 1989, Longleaf International Fund (LLINX) incepted in 1998, and the Longleaf Global Fund (LLGLX) incepted in 2012. The flagship Longleaf Partners Fund returned negative 16% for H1 2020 compared to negative 3% for the S&P 500 index. Annualized returns since the 1987 inception is 8.98%. Although, the fund is focused on US mid-and-large cap businesses, the current allocation has a non-US company in the top ten: LafargeHolcim (OTCPK:HCMLY). CK Hutchison (OTCPK:CKHUY) which was in the top ten is now just outside that as they trimmed the stake during the quarter. Cash allocation is ~20%, up from ~8% last quarter.

Note 1: Although their mutual funds are well known among retail investors, it should be noted that a sizable portion of Southeastern’s AUM ($9B total) is attributable to separately managed accounts.

Carrier Global (CARR) and Melco Resorts (MLCO): These are the two new positions this quarter. The 4.92% CARR stake came about due to the merger of United Technologies with Raytheon that closed in April. They had a 2.16M share position in Untied Technologies for which they received the same amount of CARR shares. They also increased the resultant position by roughly 4x during the quarter at prices between $12.90 and $24.40. The stock currently trades well above that range at $30. MLCO is a minutely small 0.03% position.

Note: Southeastern had a ~5% ownership stake in Park Hotels & Resorts. Their Q2 2020 letter indicates that they swapped into Hyatt’s better mix of fees and owned assets. Park Hotels’ trophy assets along with the focus on conferences and group meetings are extra-difficult places to be in.

Note: Southeastern had a ~10% ownership stake in the business.

Note: Their cost-basis on the position is ~$16. Southeastern has a ~7% ownership stake in CenturyLink. They continue to be very bullish on CenturyLink.

Note: The prices quoted above are adjusted for the coal spin-off in November 2017. Southeastern has a ~27% ownership stake in CNX Resources.

Mattel Inc. (MAT): MAT is now a large (top five) ~7% portfolio stake. It was established in Q3 2017 at prices between $14.50 and $21.50 and increased by ~250% the following quarter at prices between $13 and $19. The stock currently trades below those ranges at $10.80. Last four quarters have seen minor trimming. For investors attempting to follow Southeastern, MAT is a good option to consider for further research.

Note: Southeastern has a ~10% ownership stake in Mattel Inc.

DuPont de Nemours (DD): DD is a ~4% of the portfolio position purchased last quarter at prices between $28.50 and $64 and the stock currently trades at $58.80. This quarter saw a ~37% reduction at prices between $32 and $57. They have had two successful previous roundtrips with DuPont.

Note: Southeastern’s ownership stake in PotlatchDeltic is ~5.5% of the business.

Note: The prices quoted above are adjusted for the spinoff of Cable One (CABO) from Graham Holdings that closed on July 1, 2015. Shareholders of GHC received one share of CABO for each share of GHC held. Southeastern controls ~9% of Graham Holdings.

Note: Southeastern controls ~11% of the business.

Note: Following acquisition of Formula One, Liberty Media was renamed Liberty Media Formula one and the stock symbols changed. Southeastern controls ~5% of the business.

CNH Industrial NV (CNHI) and Trip.com (TCOM): These two very small (less than ~1% of the portfolio each) positions were decreased during the quarter.

Note: CNH Industrial is a top position in the firm. The 13F only shows the US-listed portion of their holdings.

Note: The buy thesis is based on the idea that the business is positioned to withstand even a protracted shutdown and prosper on the other side. This is due to their asset-light model and industry leading balance sheet strength.

Empire State Realty (ESRT) and Univar Solutions (UNVR): These two positions were built this year. The 2.62% ESRT stake was purchased at prices between $6.50 and $14.30 and it currently trades at $6.67. The 1.94% UNVR position was purchased last quarter at prices between $7 and $24 and it now goes for $17.23. There was a marginal stake increase this quarter.

Eastman Kodak (KODK), Venator Materials (VNTR), and WideOpenWest (WOW): These minutely small (less than ~0.30% of the portfolio each) stakes were kept steady this quarter.

Note: Southeastern has a ~56% ownership stake in Eastman Kodak (4.96M shares in the 13F report and the rest in preferred converts).

The spreadsheet below highlights changes to Southeastern’s 13F stock holdings in Q2 2020: 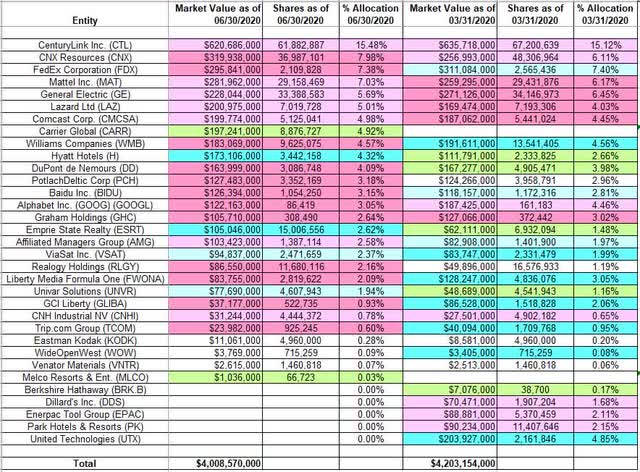 Disclosure: I am/we are long BRK.B, CKHUY, CTL, ESRT, GE, GOOGL, PK. I wrote this article myself, and it expresses my own opinions. I am not receiving compensation for it (other than from Seeking Alpha). I have no business relationship with any company whose stock is mentioned in this article.

Editor’s Note: This article discusses one or more securities that do not trade on a major U.S. exchange. Please be aware of the risks associated with these stocks.

Did you know, if you put $5 into a savings account every single morning when