This article is part of a series that provides an ongoing analysis of the changes made to Dan Loeb’s 13F stock portfolio on a quarterly basis. It is based on Third Point’s regulatory 13F Form filed on 08/17/2020. Please visit our Tracking Dan Loeb’s Third Point Portfolio series to get an idea of their investment philosophy and our last update for the fund’s moves during Q1 2020.

Third Point lost 3.7% through July this year, compared to a positive 2.4% return for the S&P 500 Index. Annualized returns since December 1996 inception are at 13.8%, compared to 8.2% for the S&P 500 Index. AUM is distributed among several strategies, of which the long/short equity portion accounts for ~40%. In addition to partner stakes, Third Point also invests the float of Third Point Reinsurance (TPRE) and capital from London-listed closed-end fund Third Point Offshore (OTC:TPNTF). To know more about Dan Loeb’s Third Point, check out his letters to shareholders at their site.

Note: Large equity investments not in the 13F report include Sony (SNE), EssilorLuxottica (OTCPK:ESLOY), and Nestle (OTCPK:NSRGY). All three are activist stakes. SNE is a $1.5B investment made in June 2019, when the stock was trading at around $50 per share. It is currently at ~$80. The ESLOY investment was made in early 2019, when the stock was trading at ~$62.50 per share. It currently trades at ~$67. The NSRGY position is from 2017, and the stock has rallied over 50% since.

Alibaba Group Holdings: BABA is a large (top-five) 5.91% of the portfolio position established this quarter at prices between $187 and $229, and the stock currently trades well above that range at $284.

Note: Cannae Holdings and Black Knight Inc. are back in the portfolio after a quarter’s gap.

Note: On Centene, it was reported that Third Point had wanted the company to consider selling itself before spending $15.3B for the acquisition of WellCare Health. That transaction closed in January.

Avantor Inc. (AVTR), Raytheon, and Sony Corp.: These very small (less than ~1% of the portfolio each) stakes were disposed this quarter.

Note: Third Point has a large position in Sony. The 13F only shows the ADR stake.

Note: Third Point’s bullish thesis on Disney is on the idea that Direct-to-Consumer (DTC) streaming is a big opportunity: Disney+ reached 60M subscribers in nine months. This is compared to Netflix (NFLX), which took seven years to reach this milestone.

Note: The prices quoted above are adjusted for the Fortive (FTV) spin-off in July 2016.

Baxter International (BAX): BAX was Loeb’s largest position at ~15% of the 13F portfolio as of last quarter. It was reduced by roughly two-thirds to a 4.71% portfolio stake this quarter at prices between $79 and $94. The original position was from 2015 at a cost basis of ~$40 per share. The stock currently trades at ~$86. Third Point is realizing long-term gains.

Note: The bulk of the stake in Kadmon Holdings is from prior to its IPO in July 2016 (PE investment). The biopharma was founded in 2010 by Sam Waksal (ImClone insider trading conviction and 7-year prison term infamy, circa 2003). Loeb controls ~6.5% of Kadmon Holdings.

Far Point Acquisition (FPAC) & Units: The 2.20% position established in Q2 2018 has since been kept steady. Far Point Acquisition is a SPAC that Third Point co-sponsored. They control 24.9% of the business. In January, FPAC merged with Global Blue in a $2.6B deal that is expected to close this week – a majority have opted to redeem the shares.

The spreadsheet below highlights changes to Loeb’s 13F stock holdings in Q2 2020: 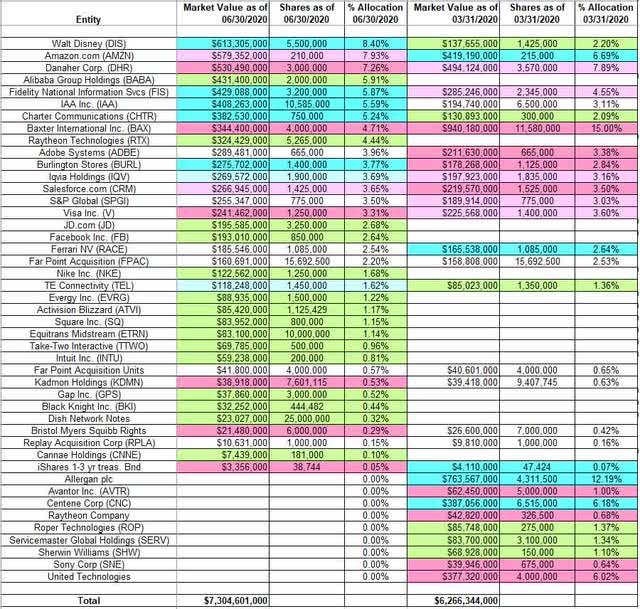 Disclosure: I am/we are long ABBV, AMZN. I wrote this article myself, and it expresses my own opinions. I am not receiving compensation for it (other than from Seeking Alpha). I have no business relationship with any company whose stock is mentioned in this article.