Quicker recovery in the industry

The industrial activity is essential to the Brazilian economy. According to the data provided by the National Industry Confederation, it generates nearly 21% of the country’s GDP.

If we look at Brazil’s GDP structure in the first quarter of 2020, we will see that among the industrial sectors, the manufacturing and construction sectors sagged the most compared to the fourth quarter of 2019. 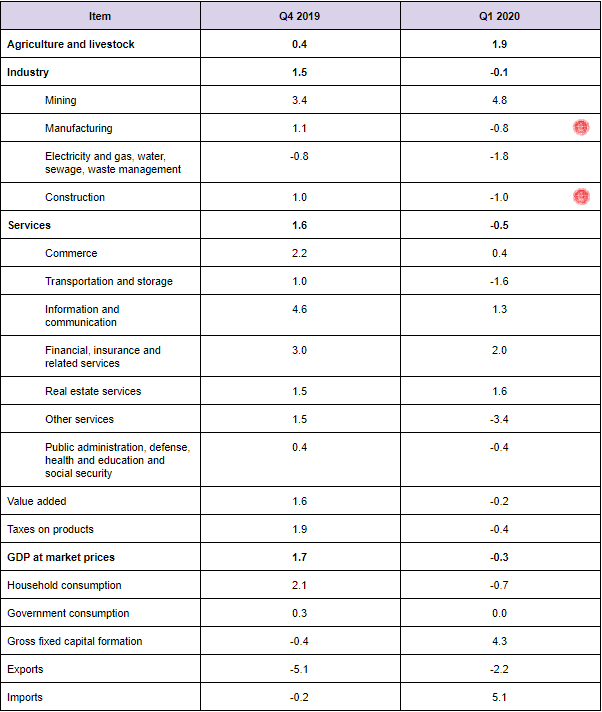 However, the data from leading indicators suggest that the industry is recovering at the moment more confidently than the service sector. According to the Getulio Vargas Foundation data, the Industrial Confidence Index (ICI) fully recovered in August to its average of 100 points, indicating the neutral business sentiment in the industry. The same report provides a reason for such sentiments:

Although they are still dissatisfied with the level of demand, the opinion of businessmen on the situation is that at the moment it has increasingly approached the pre-pandemic period.

In the service sector, the situation is worse. According to the Brazilian Institute of Geography and Statistics (IBGE), the sentiment index for services sank more significantly, and in June 2020 (the latest published data), it was still much lower than both its pre-crisis level and its average value.

The Industrial Confidence Index and Monthly Survey of Services, 2016-2020 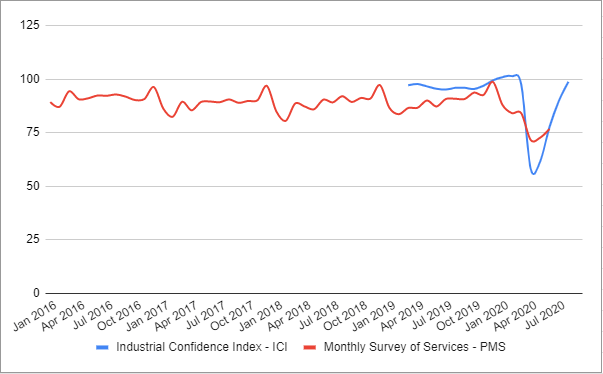 We can suggest that since the leading indicator of the service sector did not show a sharp recovery in June-July in contrast to the industrial sector, we do not expect a sharp rebound in this segment in the third quarter. The main reason for such performance is restrictions still in force due to the coronavirus.

If we turn our attention to another significant sector of the industry – construction – then practically all sub-indices of sentiments in this sector have come close to the neutral level of 50 points.

What is more important is that although this year’s values are still lower compared to July 2019, in the area of investments, the sentiments of industry participants have almost returned to the pre-crisis level, which is somewhat surprising, given the situation in other countries. The main limiting factors are insufficient demand (especially among large-scale projects) and a shortage of materials and equipment. 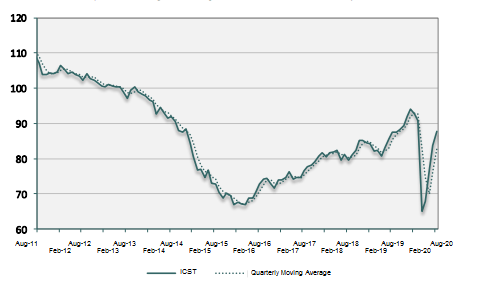 However, you need to know that a large part of the growth of this index was ensured by less pessimistic views for the coming months, mainly due to the improvement in the current situation. At the same time, most of the advances occurred in July and August, while in April-June, it stood practically in the same place. So, in the second quarter, after the publication of data on the Brazilian GDP, we expect a sharp decline in this sector, followed by a sharp increase in the third quarter.

The service sector sank more than the industry in the first quarter. Quite unexpectedly, the segment of information and communication technologies experienced the largest decline. In the industry, the largest decrease came from the manufacturing sector. The most acute phase of the coronavirus crisis in Brazil fell from April to the end of July, so economists expect a more significant drop in GDP in the second quarter. According to the FGV, which calculates the Economic Activity Indicator (IAE-FGV), in the second quarter, Brazil’s economy may fall by 11.2% in annual terms. Official data published by IBGE will be available on September 1st this year. What matters to us is which sectors of the Brazilian economy will recover first and at what speed.

We can assume that the mining industry will show the steepest decline among all industry segments. However, leading indicators indicate robust growth in manufacturing, while the mining and construction sectors are growing at a slower pace. 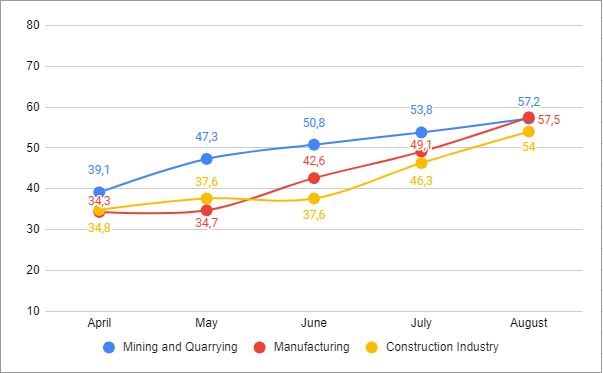 Likewise, for the manufacturing industry, after a fall in the second quarter, a significant rebound in this sector can be expected in the third quarter. The situation in the mining industry is worse. We suggest that in the second quarter, it will experience a modest decline as compared to the manufacturing and construction sectors. But at the same time, we cannot expect the subsequent sharp recovery in the mining industry, because its ICEI curve is more flattened.

One sector lagging behind the rest of the industry is vehicle manufacturing. Car production in Brazil is returning to pre-crisis levels. If we look at the current year, then after an almost complete halt of production in April this year, this indicator showed a sharp increase in July. The growing production of automobiles secured a large part of this increase. 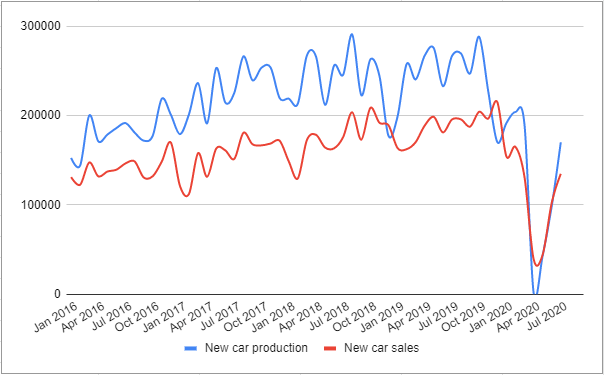 Vehicle production in Brazil in 2020

New car sales are showing similar dynamics, but their decline and subsequent recovery are more smoothed and have not yet reached the pre-crisis levels. However, compared to 2019, production and sales still fell by more than a third, so given the uncertainty in the consumer sector, a slower recovery can be expected in the future.

Automobile sales in Brazil in 2020

According to forecasts of the Association of Motor Vehicle Manufacturers, a return to monthly production of 270-280 thousand units and sales of 190-200 thousand vehicles is possible only in 2025:

Our expectation is that only in 2025 the sector will return to the levels of 2019, that is, with a delay of six years.

Returning to the service sector, according to the IBGE report for June this year, the growth in retail sales was expected:

The positive results were expected, because we came from a very low comparison basis, which was the month of April (-17%). As a result, this growth was virtually widespread, distributed along nearly all the activities.

If we take a closer look at the contribution of each sub-index, we will see that books and magazines (+69.1%), apparel and footwear (+53.2%), and furniture and household appliances (+31%) secured the largest part of this growth. And this is understandable during the period of quarantine. Afterward, we expect a decrease in their growth rates.

According to the Business Confidence Index (ICEI), the most significant improvement in the situation at the moment is in the industries indirectly associated with consumers. 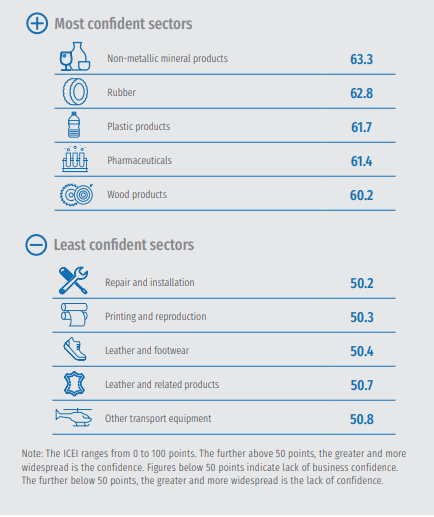 However, after the improvement of the situation with coronavirus infection, we can expect the opposite reaction, when sectors such as repair and installation, and light industry can start to grow at a faster pace. The pharmaceuticals, mineral products have already passed the stage of the initial rebound, and may not show robust growth in the future.

The prevailing opinion among political leaders is the priority of the economy over health care. Therefore, even though Brazil is second only to the United States in the number of COVID-19 cases, strict quarantine measures in this country have not been adopted. In part, coupled with a massive economic stimulus that led to a budget deficit of $17.5 billion in July this year, the largest since 1997, this has led to a faster-than-expected economic recovery.

In general, as in other countries with a similar economic situation, economic stimulus measures provided a sharp rebound in industries where social distance and restrictive measures do not significantly affect their performance. This view is in line with the opinion provided by Goldman Sachs:

Because these numbers come after such a massive collapse, there is no reason for a victory lap.

We expect that in the current situation, the demand for food products, essential goods, cheap products will grow. At the same time, demand for durable goods such as cars, housing, after the initial rebound, will remain weak, reflecting consumer uncertainty about their income. The level of their demand will also be affected by the falling real, which makes imported goods more expensive. In this regard, a reorientation of production activities towards import substitution is possible. Theoretically, this could provide support to Brazilian small- and medium-sized businesses, severely affected by the coronavirus infection.

Patricia Lynn once said, “If we open ourselves up to our feelings, our intuition, and