Earlier this year, fellow Seeking Alpha contributor Montana Skeptic wrote an interesting article discussing the peculiar relationship between electric vehicle maker Tesla (TSLA) and online auto retailer Carvana (CVNA). The article discussed a variety of curious topics, including pending purchases on the Carvana site for months, and used car prices that didn’t seem to make much sense. All of this ties in to a key number that Tesla uses and its fans like to cite, residual values, but some of these numbers don’t seem to add up. Today, I’d like to look at some weird things I’ve found recently.

Most standard vehicles are not something people buy looking to sell later for more money. Drive your car off the lot, even only for a mile or two, and under most normal circumstances the dealer is not going to buy it back from you for what you paid. A lot of Tesla fans talk about the low depreciation of the company’s vehicles as one reason why they like the product, and in certain cases, the stock as well.

Montana Skeptic talked in his article about how using high residual values for Tesla’s vehicles can overstate revenues and understate liabilities. There also could be an impact on expenses if Tesla does not depreciate enough costs on its leases if it is using an end of lease value on a vehicle that’s more than it should be. For example, if Tesla is leasing a Model 3 that costs $35,000 to build and it expects the end of 3-year lease value to be $30,000, the total depreciation over the leasing period would be a lot less than if it expects the end of lease value to be $25,000.

As Tesla filings detail, the company looks at the market to determine certain values over time. However, what if these market values are somehow manipulated or something funky is just going on? Well, I’ve found at least one instance where that certainly seems to be the case, and it comes from one of the most respected car value sites out there, Kelley Blue Book. Using this site, I was curious to see what the value of a 2020 used Model 3 SR+ sedan would be. The image below shows the results. 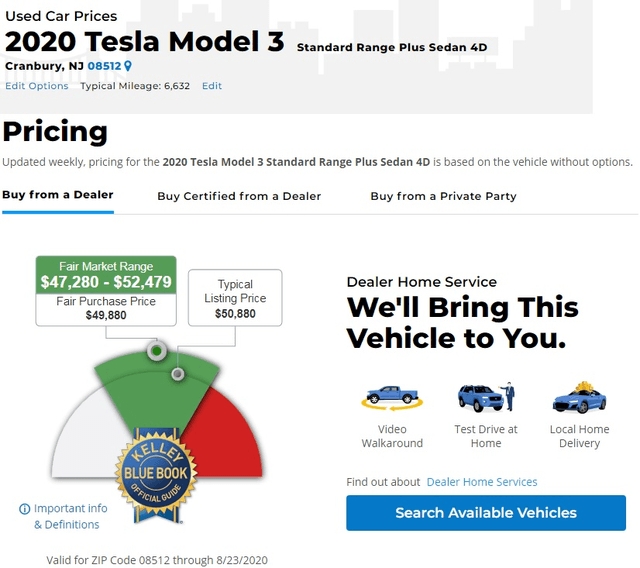 Now I ran the most basic of queries here, that is, buying the vehicle without any options selected, such as paint colors, tires, full self-driving package, etc. Even so, the fair purchase price comes up at just under $50,000, which is completely shocking. Why would someone pay that much for a vehicle, with typical mileage of more than 6,600 miles, when you can buy a brand new Model 3 directly from Tesla for under $40,000, and potentially a bit less depending on state electric vehicle incentives?

Regardless of this one data point, there’s also another side of this that’s more of a longer term thing. Kelley Blue Book estimates a lot less mileage for electric vehicles than its ICE-powered counterparts. In Tesla’s Q1 2018 earnings report, the company compared the Model 3 against four mid-sized premium ICE sedans. Earlier this month, I searched KBB’s site to see how these five vehicle classes compare for used vehicles of each model year since the Model 3 launched. The mileage results are found below.

If it was just a one-off, I might have thrown away the 2017 model year because the Model 3 had limited production volume in the back half of the year. Even if you compare a 2018 BMW model year vehicle versus a 2017 year Tesla Model 3, the ICE vehicles have a lot more mileage. If I’m trying to buy a used vehicle that’s 3 years old, for example, one that has 30,000 miles is probably going to be a bit more expensive than a similar 50,000 mile vehicle.

I bring up the idea of longer term mileage for ICE versus Tesla because it can certainly impact residual values. However, it also factors into the supposed “gas savings” that Tesla promotes on its vehicle order pages, savings that are used right up front to show you a vehicle’s price. The image below shows what Tesla says about these gas savings. 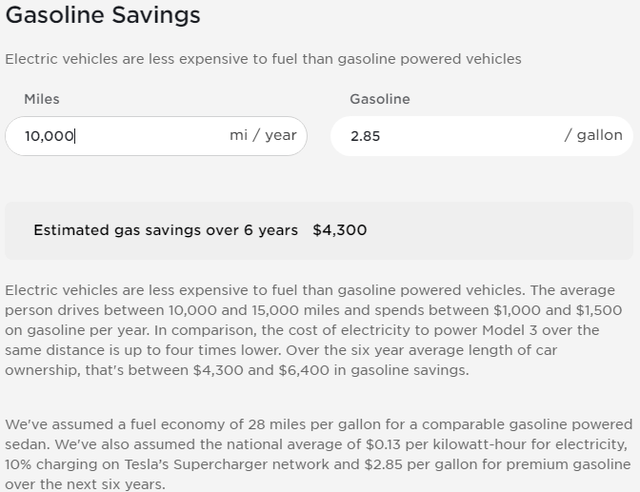 Now you can fiddle with the inputs such as electricity prices and gas prices all you want, but that’s not what I’m interested here. Over the last few months, I’ve tracked the “typical mileage” that KBB has used for its Tesla vehicles. Between the three model years 2017 through 2019, the added mileage over time annualizes out to between 7,626 miles and 9,156 miles.

If you are driving a lot less miles than the numbers Tesla uses above, then your fuel savings are going to be a lot less. In fact, Teslanomics has a handy calculator that can be used to calculate such savings, and if we use Tesla’s inputs and only 7,800 miles a year for both Tesla Model 3 and an ICE-comparable vehicle, the 6-year gas savings comes in at just under $3,000. That’s a significant difference in percentage terms to what Tesla claims on its site and uses to promote its vehicle pricing.

Tesla bulls might argue against some of these items, but it’s really a matter of consistency here. If we are going to use annual mileage of less than 8,000 to calculate depreciation and residual values, then we shouldn’t be using that for gasoline savings. On the flip side, if you want to use the higher mileage, then perhaps we should be depreciating Tesla vehicles more given the added mileage, which would add more expenses each quarter for Tesla and reduce the residual value part of the bull case quite a bit.

As Montana Skeptic pointed out, there’s a curious relationship between Tesla and Carvana. However, the situation also seems to expand to Kelley Blue Book, which has some very strange values for used Tesla vehicles. I’m sure that Tesla bulls might not see these issues as that important, but they are certainly a big deal if Tesla is using artificially inflated prices to determine its expenses and liabilities, which would just add to previous questions surrounding the company’s accounting practices.

Additional disclosure: Investors are always reminded that before making any investment, you should do your own proper due diligence on any name directly or indirectly mentioned in this article. Investors should also consider seeking advice from a broker or financial adviser before making any investment decisions. Any material in this article should be considered general information, and not relied on as a formal investment recommendation.

Many of us in the U.S. were forced to celebrate Thanksgiving from afar this year,

How to Beat Decision Fatigue: The Ultimate Guide

This is a guest post by Stephen Roe. Stephen no longer falls asleep on the