The SEK/EUR has seen a significant uptrend in strength this year. The main reason for this is that the Riksbank (Sweden’s central bank) has adopted a monetary policy of resisting a lowering of rates into negative territory.

As a result, the currency has been seen as an ideal form of exposure to European markets, without risking potential weakness from the euro.

That said, the SEK/EUR took a bit of a breather this month: 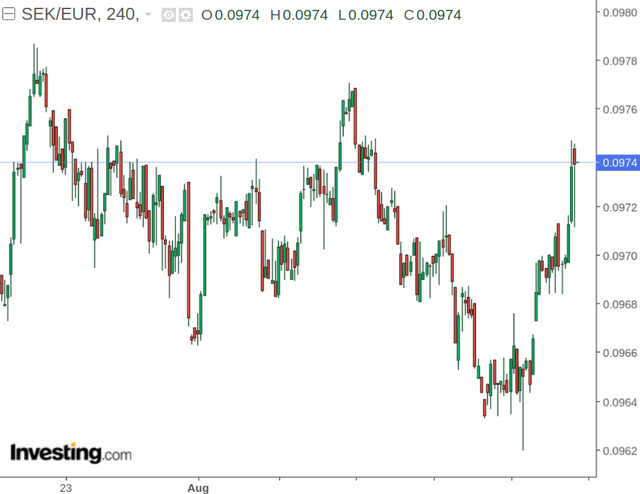 With growth in coronavirus cases having somewhat flatlined in Europe up until now, the euro had been seeing significant gains against the U.S. dollar as COVID-19 cases continue to rise in the Untied States.

That said, with cases in Europe showing signs of rising again, I recently argued that the rally in the EUR/USD may be over for now. Recently, we did see a jump in the SEK/EUR from 0.0964 to 0.0974 at the time of writing.

Additionally, the Swedish government appear to be relying more on vastly increased fiscal stimulus, in recognition of the fact that monetary policy is no longer as flexible as before. Specifically, the government has apportioned 100 billion kronor for spending in 2021 in order to kickstart economic growth once again, with further stimulus also planned for 2022 and possibly 2023.

That said, the government is expected a stronger recovery in growth than previously anticipated, with a 4.1% growth in GDP expected.

With that being said, the Swedish krona has actually seen some weakness when compared to other Scandinavian currencies, such as the Norwegian krone. 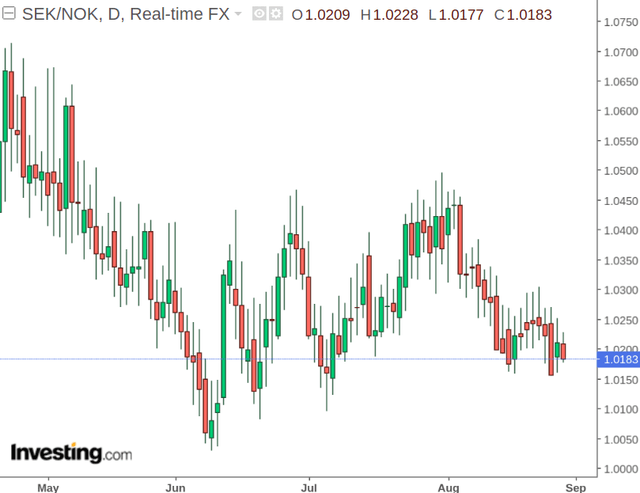 We observe that even with oil prices having come under significant pressure this year, the SEK/NOK has actually been weakening since April.

Notably, the Norwegian central bank recently left its own policy rate unchanged at zero. Moreover, the central bank also expects to maintain this rate “over the next couple of years”.

In the case of Norway – inflation has seen a significant rise since April:

According to Trading Economics, the rise in inflation was driven by transport, furnishings and household equipment, along with recreation and culture. In this regard, discretionary spending in Norway appears to be significantly rebounding. Moreover, inflation remains below the 2 percent target as set by Norges Bank and therefore I do not see inflation being at the point where it is at risk of weakening currency demand.

On the other hand, inflation has struggled to climb back to previous levels in Sweden, and even dropped heading into July:

Specifically, communication, food and non-alcoholic beverages, along with housing and utilities were responsible for much of the decline in the overall price level.

In this regard, Sweden’s strategy of a less lenient lockdown does not appear to have particularly spared the country the economic damage that has been seen by other countries in Europe, with GDP down by -7.7% at the end of July:

In this regard, Sweden is likely to come under increasing pressure to boost GDP and bring inflation back to within a target of roughly 2%. It remains to be seen whether fiscal stimulus alone will be enough to achieve this. That said, such fiscal spending will likely have the effect of boosting the Swedish krona. However, we could start to see weakness in the krona once again should consumer spending and inflation not significantly recover by next year.

To conclude, I continue to take the view that the SEK/EUR will continue to rise. However, maintaining rates above zero will only do so much in terms of bolstering the currency upwards. While I expect growth ahead, I anticipate it will be more modest.