I’ve been a bull at times on specialty retailer Party City (PRTY) over the past few years. The company – during normal times – sells disposable products with very high margins in large quantities, and has very little capex. That’s the recipe for a profitable, cash-generating machine, and I’d argue Party City has been that before. However, as we can see below, times have changed. 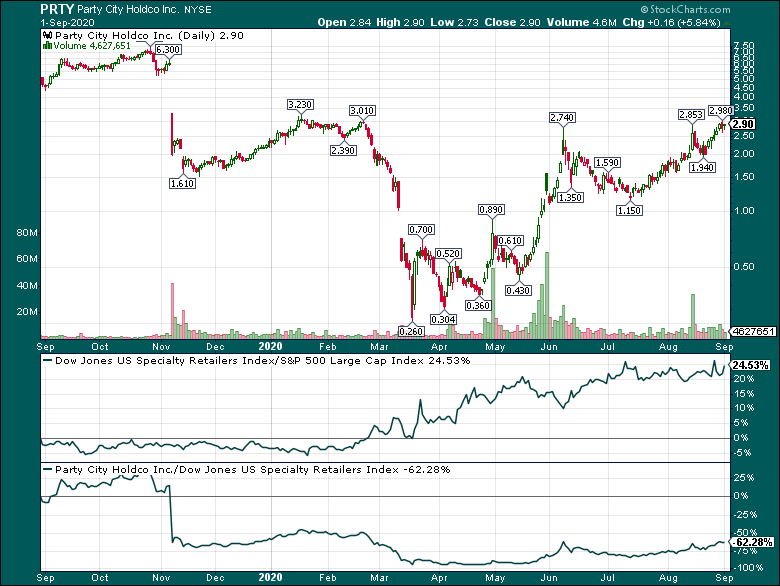 The very thing Party City’s success is predicated upon – large, frequent social gatherings – has been all but outlawed in much of the country, meaning it is working with mere scraps compared to normal volumes. For a company with a huge amount of debt, this sort of sudden, very sharp downturn can be quite problematic, and while the stock broke through recent resistance in the area of $2.80 on Tuesday, I think this is an opportunity to sell.

I’ll note that in the middle panel of the above, you can see that the company’s peer group has vastly outperformed the broader market this year. Party City, on the other hand… hasn’t. It’s been a weak performer for a long time, and while it is spiking at present, as I said, I think this is a chance to sell.

The company is very small at $259 million in market capitalization, and to boot, its share price is under $3. That means it can be volatile and move up or down in huge amounts quickly, so I’m not saying today’s print is the top – anything can happen. What I am saying is that at ~$3, Party City is fairly valued at best and probably quite risky at worst.

As I mentioned, because of its business model, Party City was probably in worse shape than most of its specialty retail brothers and sisters. It is about as far from essential as I can imagine, and its stores were closed for months as a result.

About two-thirds of its stores were closed for in excess of two months, with the balance at three months, give or take. That’s a lot of revenue that wasn’t allowed to happen, and when you consider these shutdowns occurred during graduation season, as well as during spring and early summer birthdays, the damage is worse. To its credit, Party City opened its stores as quickly as it could in a safe manner, and they’ve all been open since late June. However, that doesn’t mean that the company’s business model – one that requires the opposite of social distancing – will continue to work in the manner that it did.

I mentioned Party City has a high amount of leverage, and that’s been the case for its entire life as a public company. However, this situation obviously exacerbated its need for cash, and the result is what you see below.

Party City recently undertook an exchange offering wherein it reduced its leverage by $463 million and boosted available capital by $100 million. Those are both excellent things, but it was done at the expense of issuing nearly 16 million new shares. That’s not excellent, as it means that shareholders have been diluted pretty extensively. At the end of the quarter, the company had ~93 million shares outstanding. That means this exchange diluted existing shareholders by 17% immediately, making each share essentially worth 17% less than it was as a percentage of the float.

That means the road ahead for EPS growth is steeper given that the company is spreading its future earnings – if there are any – over 109 million or so shares rather than 93 million.

In addition, the company has diluted shareholders at an extremely low share price, meaning that it didn’t even receive that much cash for its dilution. When companies like Tesla (TSLA) dilute shareholders at extreme valuations, they are receiving good value for the dilution. They sell expensive shares to the market to raise capital more effectively than debt. At less than $3, Party City is selling a lot of shares for not much cash, relatively speaking, so it is a double whammy. In case you couldn’t tell, I don’t like the deal all that much.

Party City saw comparable sales of -52.4%, although e-commerce did nearly double as the company pivoted to curbside pickup and delivery amid the pandemic’s onset. The company reported a -6.5% comparable sales number for June, and it says July’s comparable sales were positive. That’s a decent result considering the conditions Party City is operating in, but I’m hesitant to get too excited. Indeed, the very last bullet point above says the same thing but from the company’s management team.

Moving on from the pandemic and the company’s capital raise, I still wonder just how much demand there will be for Party City’s services as we come out of the pandemic.

Revenue is obviously taking a nosedive this year, but into next year, the rebound really isn’t all that big. In fact, for 2021, it appears Party City will be closer to this year’s revenue total rather than that of 2019. I think that says quite enough on its own.

The culprit is mostly the company’s rather lethargic comparable sales numbers, which we can see below. 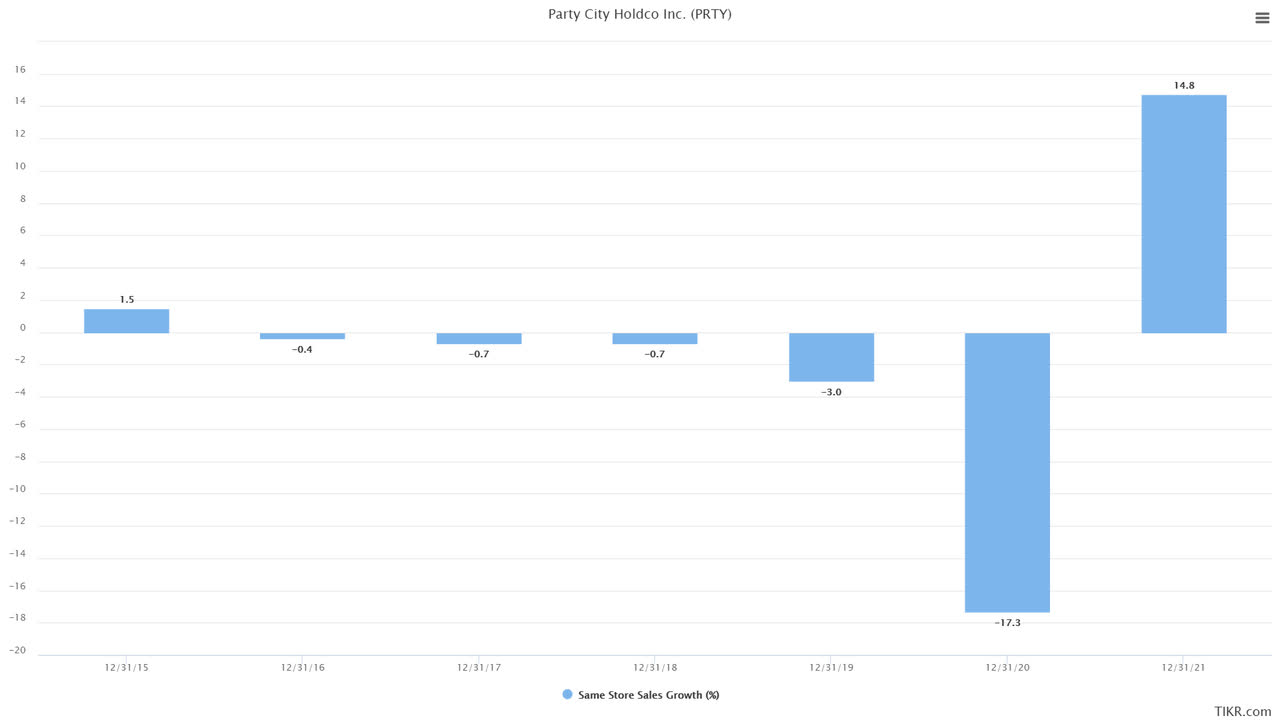 Party City is nursing a four-year streak of negative comparable sales numbers, with 2020 virtually certain to extend that streak to five. Next year, of course, we’ll get a rebound, but notice that it is expected to be less than 15% after a 17%+ decline this year. In other words, if we smooth out the pandemic’s impact, we’re still talking about slightly negative comparable sales growth. And these numbers assume a return to normal next year, which I’m not willing to bet on when it comes to parties. The fact is that no one understands the long-term impacts on human behavior of this extraordinary event. Betting people will just go back to normal with respect to parties seems a bit optimistic to me.

EPS paints a similarly dire picture, as you can see below.

Analysts expect just 27 cents in EPS next year after a huge loss for 2020. Interestingly, just 35 cents in EPS is expected for 2022. In other words, while Party City should survive, the shape of its margins and revenue potential appear to be in serious doubt.

At $2.90, I think too much is being priced in. That’s ~11 times next year’s earnings, which is slightly better than where Party City traded before the pandemic. With the immense amount of uncertainty facing the company’s eventual road to recovery, a fair value multiple seems very optimistic. I think considering the dilution that occurred, its still-high leverage, and its very uncertain future, something like 6-8 times earnings is fair. That’s a long way down from here, and Party City is a Sell as a result.