Not This Again: Too Many Treasuries?

Tomorrow, the Treasury Department is going to announce the results of its latest bond auction. A truly massive one – $47 billion is being offered of CAH4’s notes dated August 31, 2020, maturing out in August 31, 2027. In other words, the belly of the belly, the 7s.

We’ve already seen them drop for two note auctions this week, both equally sizable. Yesterday, Treasury floated $50 billion in 2-year notes that the supposedly under-siege banking system yet had little trouble gobbling up. Before that, $51 billion of 5s with the same number of auction issues: zero.

The common explanation is what the common explanation always is: the Fed. Gigantic QE, people say, has monetized the bulk of these assets, otherwise it would be game over for the Treasury market. Bond rout!!!! in the extreme (maybe five or six exclamations tacked on its end).

Like gold’s recent rise, there’s a fair amount of revisionism in that view. When the Fed is the center of your universe, it’s understandable why you’d believe history began in the middle of March 2020. But even that fails to account for how it was the private marketplace which absorbed more than $2 trillion in bills Jay Powell was at least aware enough to stay away from (though he continues to display his complete lack of appreciation for why he was right to do so). 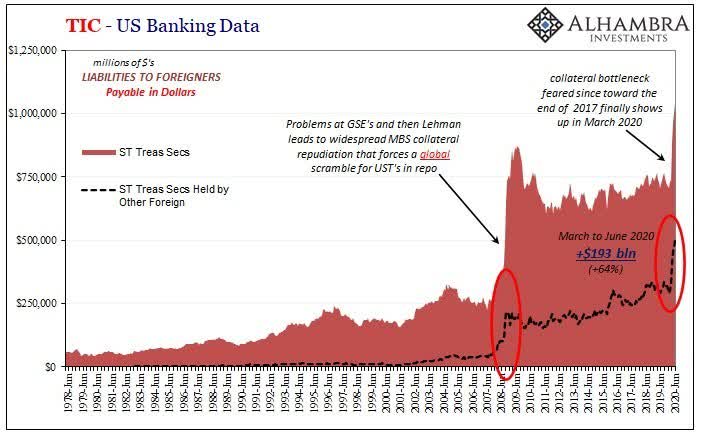 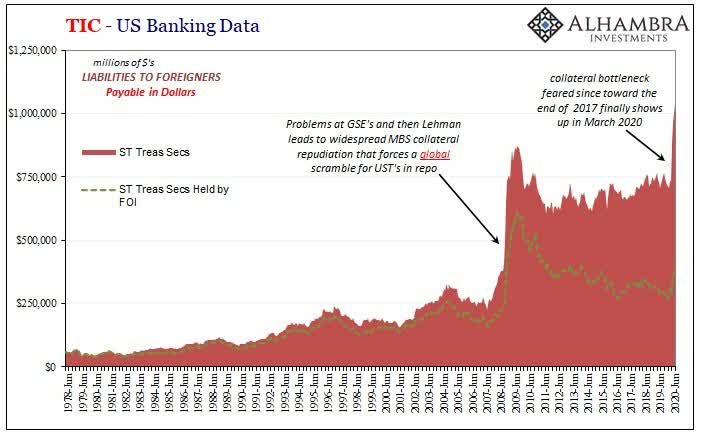 In fact, the Fed has bought so many bonds and notes that it’s actually trading special in repo – meaning there aren’t enough of certain issues out in the collateral marketplace! You see, the level of demand hasn’t really changed for USTs across the curve, the only factor which has is the Fed’s activity in that marketplace.

The first “too many” Treasuries explanation didn’t really last beyond 2018, though it would take another year for some of its most vocal proponents to realize this (some still refuse). The idea then was the same as it is now: the government has simply gone batshit crazy, giving drunken sailors and history’s litany of money printing despots a bad name.

And that is absolutely true. But what has happened in many circles is that emotion is being substituted for rational analysis; hatred for the abandonment of long-held and historically validated principles has blinded many to the practical nature of what the evidence is saying. Many are simply cheering for the Treasury market’s demise as a way to reclaim their sacred worldview.

It is a worldview that I share, by the way; I take no joy in reporting these things – how the government can just borrow seemingly any amount without paying, literally, the price for being grossly irresponsible (and opening the door wide open for utter stupidity like MMT; we already have one group of “enlightened” bureaucrats telling the world they can manage the economy who have so utterly failed at doing so, they’ve created the most fertile conditions for many to begin seeking an even more “enlightened” set of bureaucrats who will, they claim, fix the first mess). What I would like to happen doesn’t enter the equation.

What the bond markets are demonstrating is that it doesn’t matter what the Fed does. Go back to the height of the last reflation burst (which wasn’t high), back to October and November 2018. The Fed was hiking and running bonds off its balance sheet, and then USTs started to catch that persistent bid anyway.

The federal government was still racking up its deficits, and with Jay Powell nowhere in sight, the banking system gobbled up every last bit that was offered nevertheless.

The “too many” Treasuries folks claimed that banks were and had been doing so because they were stuck, left with no other option; a statutory requirement to buy up what the Feds sold, no matter how disgustingly much. Not only that, foreigners were also selling these things at an accelerating rate, apparently forcing banks to buy even more of them from their big overseas customers as a painful business courtesy.

And while all of that was true, it was only ever half the story. Less than half, really, because those things were, like the petroyuan, indicating something else than this emotionally driven bit of rationalized reverse engineering. The other half, the one with all the evidence, is what I wrote during that most “unexpected” Treasury rally:

The dollar shortage must therefore already be severe if not yet overwhelming. How it gets to this later stage is the self-reinforcing nastiness typical of these money-driven downturns. Eurodollar squeeze takes hold of the global economy, it slows which only confirms the negative impression which brought out the squeeze in the first place. This leads to further monetary tightening (non-policy) and therefore even more of a drag on the global economy. Rinse. Repeat as needed.

Banks always had the option of selling their “unwanted” USTs to the public in the secondary marketplace. While required by law to buy up paper sold at auction, there has never been any sort of restriction on what to do with the things after the auction gets completed.

The financial system was always free, indeed encouraged, if what the “too many” Treasuries people said was true about how much trouble these were causing, to get rid of them! If being forced to hold these tarnished assets was a major problem in repo, as many “experts” claimed, then there was every reason to pass them along to the next sucker in line – the rest of the financial system and the public (more the former).

Which the banking system could’ve easily done if it had ever wanted to. It didn’t once want to. And we know this for a fact. 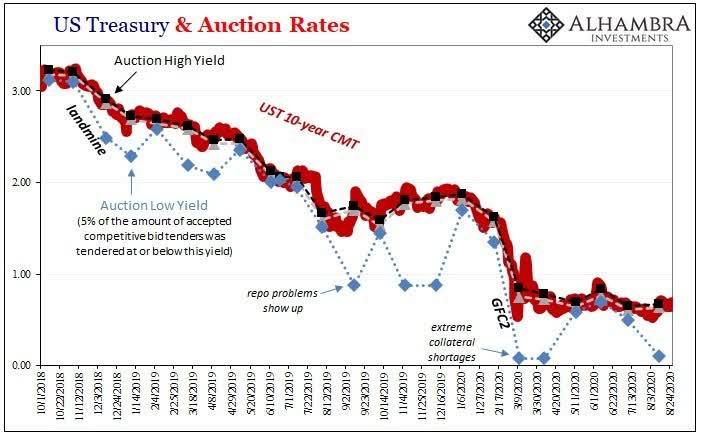 Even the guy everyone held up as the king of repo was finally forced to confess that, at least, banks were, yes, holding USTs by choice. As I wrote back in December, these facts are indeed stubborn, and Treasury prices both at auction and in the secondary market are the only facts.

The market said quite the opposite, that there were too few and that they were increasingly more valuable because of it.

Now Mr. Pozsar has had to reform his thoughts. In light of the overwhelming evidence, he finally comes around to seeing how dealers weren’t, as he said for over a year, being forced into a position they didn’t want. No, they really had chosen to hold that many bonds all along.

It had never really made any sense to begin with, outside of more emotion than rational thinking:

I guess we aren’t supposed to notice that the rest of the [financial] world has been buying UST’s at a furious pace. How else did the yield curve invert in the first place? Sure, money market fund and other nonbanks like it may have preferred commercial paper or even unsecured LIBOR to a very low UST yield, but someone is buying to push every UST yield lower to begin with.

Not just someone, but a whole ton of someones. To believe in this convoluted theory, you are asked to believe that primary dealers whose entire job is to find buyers for Treasuries are disrupting repo markets and other funding mechanisms because they can’t find enough buyers for Treasuries during a time when there is otherwise so much demand for Treasuries it has upended the natural order of curves everywhere.

And that’s right where we are now. The current curve is no longer inverted, but only because the system experienced another GFC-level global dollar shortage spasm which has left it condensed down flat to an even more grotesque Japan-like state. This is no curve, not really, certainly not a natural one by any honest standard.

It takes a whole lot of badness to distort it in such a way, and, more importantly, more such badness to keep it there. 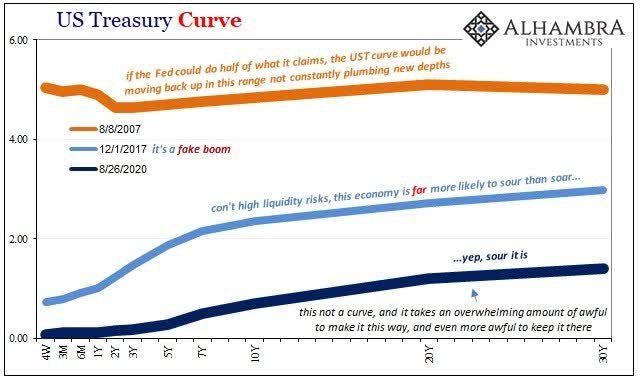 Which means, again, overwhelming demand. The Fed does not factor; buying, running off, only buying T-bills (as during not-QE), only buying bonds and notes (during this QE6), these central bankers have inadvertently done us a favor by widely testing the premise varying these parameters, if only to further rule them out.

Here’s the thing: if the market really believes the Fed is required in order to keep rates low, then the bond rout!!!! would be taking place right now. Before right now – months ago. If Jay Powell (this guy) was truly the only thing standing between keeping rates low and the idea that demand has been only him, then the UST market would’ve put in a disaster already (1994-95 to shame).

Even the gold market agrees. 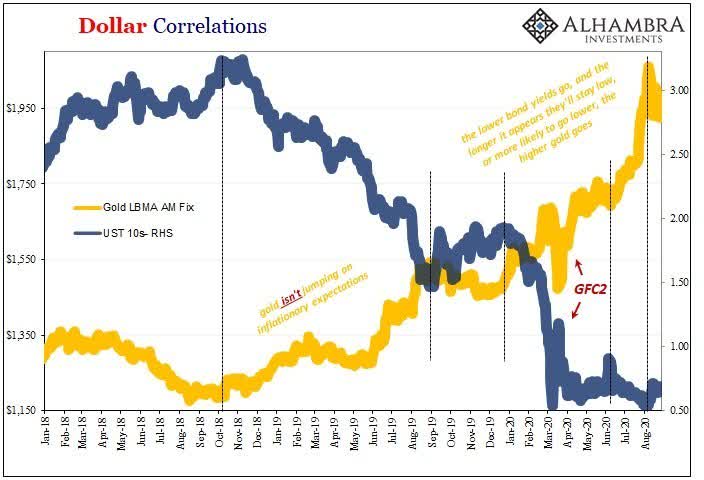