Fannie Mae (OTCQB:FNMA) and Freddie Mac (OTCQB:FMCC) are two companies in conservatorship that is run by the Federal Housing Finance Agency (FHFA). Mark Calabria who wrote the law that governs FHFA, HERA 2008, was made director of FHFA by Trump to change the course of history from one where FHFA took all Fannie and Freddie’s money as conservator and gave it to Treasury to one where FHFA thinks about what the law says before deciding what actions to take. In the spirit of following the law, FHFA and Treasury have put out a housing reform plan. Detractors of the Treasury plan have pushed for a comment period extension as a means of thwarting the housing reform plan by delaying it ad nauseam to the point where Calabria wouldn’t be able to get it done with consent decree by inauguration. Senator Sherrod Brown asked for an additional 60-day extension and Calabria wrote back saying no, that the comment period will not be extended because it has already been 12 years that FHFA was directed to come up with a risk-based capital standard, and it is time someone took Congress seriously.

This letter is a huge victory for people who believe as I do that there will be a fourth amendment this year along the lines of the Treasury housing finance reform plan in order to raise capital starting next year as FHFA says.

This letter from FHFA Director Mark Calabria highlights the need for capital and the urgency to make that happen seeing as how elections are in 67 days as of writing this. The world has had years to comment on how much capital Fannie and Freddie should hold, and this is FHFA’s second go around at proposing the capital rule. Presumably, the prior capital proposal was not capital raise-friendly. Calabria talks about how market participants have had 811 days to comment on this capital rule, which is more than enough. The premise here is that, after the comment period ends this week, FHFA will move to finalize the capital rule by end of October and then do the major lift with Treasury on the SPSPA to officially get rid of the net worth sweep in early to mid-November. I expect significant analyst coverage to start coming out after the comment period for the capital rule to end (aka next month) with buy ratings and price targets for common shares between $3 and $10. I expect preferred shares to convert to common to help facilitate an orderly recapitalization and settle the breach of contract claims that were remanded back to Lamberth.

American Banker’s Hannah Lang got a copy of Calabria’s letter. The letter is in response to Senator Sherrod Brown’s request to extend the comment period for the capital requirements at Fannie and Freddie. The real story here is that all the anti-Fannie/Freddie people out there have only one plan here, and that is to run out the clock on housing reform this year in an effort to kick the bucket into a possible Biden administration where who knows what happens. Calabria is not taking the bait. Conversations with people familiar with his perspective yield that he understands the election risk here and is two steps ahead of the guys trying to halt FHFA’s progression under his leadership into a governmental agency that follows the law. Below, you can see Calabria explains that FHFA was supposed to come up with this standard in 2008 and is in default of this mandate from Congress. For those of you unfamiliar with the matter, this default is part of how FHFA got away with the net worth sweep, to begin with: 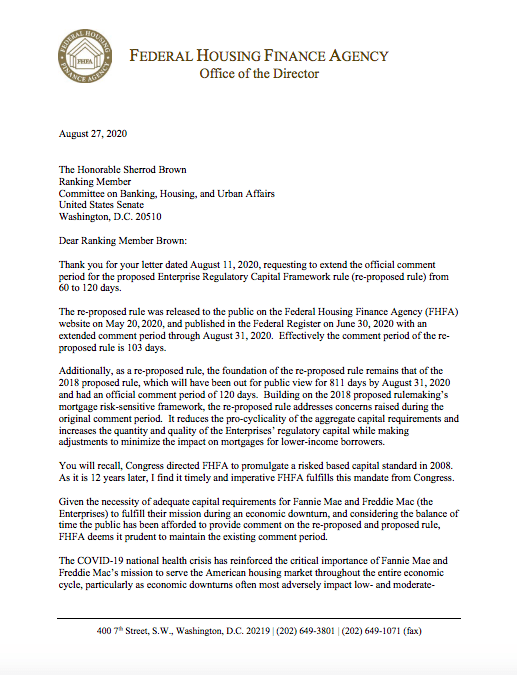 Calabria then uses the rest of the letter to talk about how he and FHFA have been more than responsive to any and all requests and feedback: 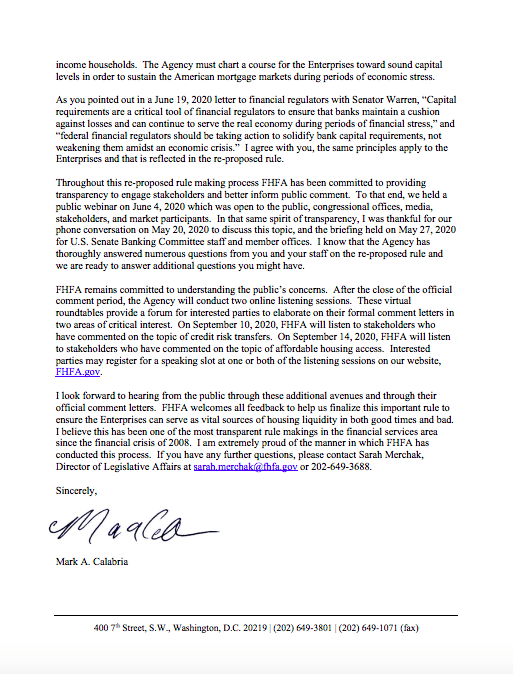 Calabria has signaled that he is serious about getting this capital rule done in order to get these companies in a position to raise capital. Because politics are still at play here, I don’t expect the heavy lifting to be done until after the elections, where the heavy lifting is restructuring the government’s equity to make raising equity capital here attractive. ACG Analytics Gaby Heffesse says that no delay is another sign that FHFA is committed to ending the conservatorships:

This is fabulous news for both common and preferred shareholders that have grown accustomed to delays on delays on delays, not limited to but including delays based on earlier court rulings that don’t seem to interpret the law in a shareholder-friendly way.

He says write down the value of the senior preferred, exercise the warrants, and convert the junior preferred:

It is important that the treatment of the historic holders of common stock and junior preferred stock are also considered as part of the final policy on executing the end of the conservatorships. Fannie Mae and Freddie Mac are public companies, with the rights of the existing holders suspended, not eliminated, by conservatorship. The government left these shares outstanding and freely trading in the market since 2008. The ultimate manner of treating the shareholders has tremendous precedent value for U.S. Government capital markets policy.

Not to mention that, when you are looking at the largest secondary capital raise in history, it’s difficult to accomplish when the governmental agency overseeing these companies and their capital raise has only a history of funneling their money to the government.

I own 9,719 FMCCG, 4,050 FMCCH, 20,031 FMCCI, 2,100 FMCCJ, 10,394 FMCCL, 6,971 FMCCM, 1,651 FMCCN, 3,259 FMCCP, 2,048 FMCCS, 3,800 FMCKP, and 5 FNMFO. These are all preferred stocks of Fannie and Freddie, mostly $50 variable “low” coupon preferred at Freddie. I have tried to play the game to maximize my par value because my interpretation of the legal claims based on what the plaintiff lawyers say is a function of par value only. The conversion details I expect to be sorted out in the next 180 days but I largely expect 100% returns on my portfolio across the next 90 days, specifically with the event of restructuring the equity of the SPSPA. Once it becomes clear that junior preferred have some sort of equity claim that is worth something, I expect their price to reflect that whereas right now their value is entirely litigation and the perspective that the administration is moving full steam ahead with this recapitalization.

This Calabria letter is huge in that department. Calabria basically gives every valid reason why he’s not going to slow down. The real story here is that he can’t really slow down if he intends to get this done because the clock is running out, and all the prior timelines have already been blown, and if the companies are to exit conservatorship via consent decree, there are timelines that need to be adhered to, and as you already know, elections are soon, and so too is inauguration. If you believe as I do that Calabria will see this through to the point of no return, it doesn’t get any better than this. In fact, I had always imagined that, by this point in time, the share prices would better reflect this future reality, but they have not, and you can capitalize on this market inefficiency. If 100% in 90 days sounds attractive to you, this is the place to be, in my opinion, but I’ve been saying that for six years. Many disappointing court rulings and rumors have become water under the bridge, but this Calabria letter is like the sun coming out from behind the rain clouds and blasting hope and a breath of fresh air in my direction. I’ve never felt better.

How To Turn On Your Productivity Super Powers

In the real world, people cannot perform at their best 24/7. We aren’t machines that

I had, and still have, a message I want to share with those that will

Advice for Influencers from Brands and Agencies