As we know content is the main driver of a streaming services’ success. Netflix (NFLX) has started building a huge collection of originals, which is starting to pay off. In this article, I will discuss Netflix’s valuable catalog of series and films, and discuss its future. 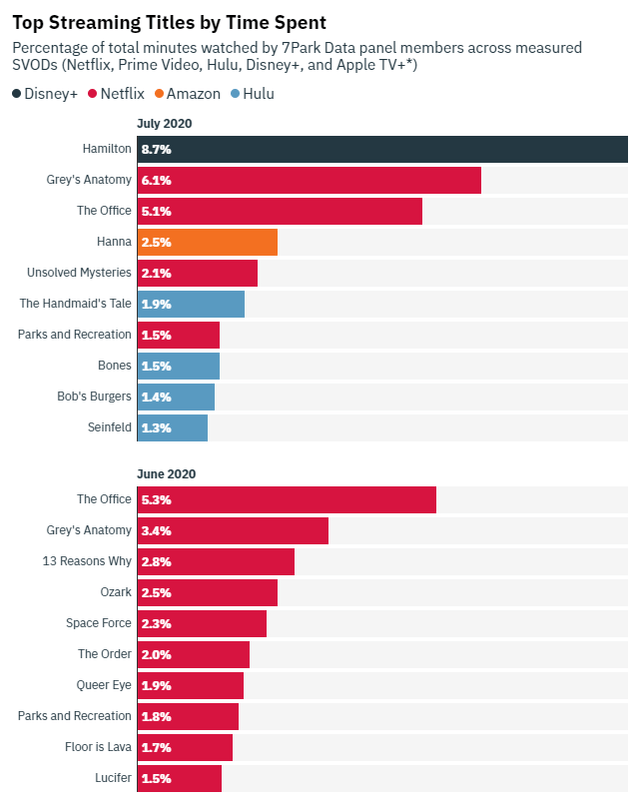 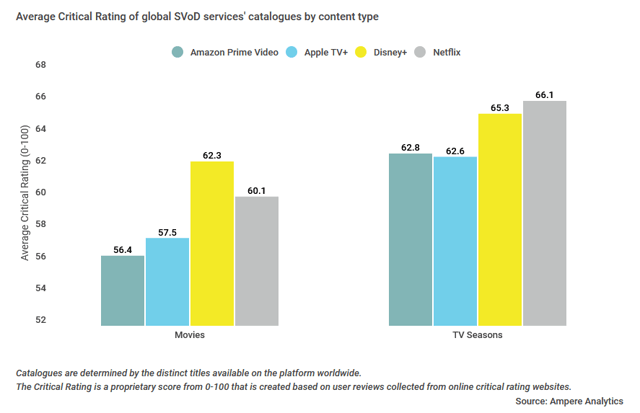 Netflix has a much more diverse catalog of films and series than Disney+. Disney’s content attracts primarily young people, Netflix, on the other hand, has a much bigger and diverse content library attractive for an entire household.

Disney+ entered the American Customer Satisfaction Index with a home-run, they came in as the very best streaming service. However, I believe it showcases the value of Netflix’s product. Disney+’s ARPU is $5.63 – this mostly includes US users – while Netflix’s ARPU is $11.24 or even $13.25 if only accounting for US users. Quite clearly Netflix is far more expensive. 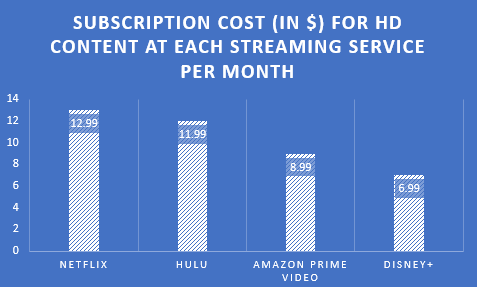 Disney+ made its magnificent collection of movies available for an incredibly cheap price, even gave Verizon clients an entire year for free. Yet they just barely attain a higher satisfaction score than Netflix – who do not have an entire Disney library backing them. It showcases that Netflix creates value for users. And if Netflix is valuable to users, it can eventually even raise subscription prices. 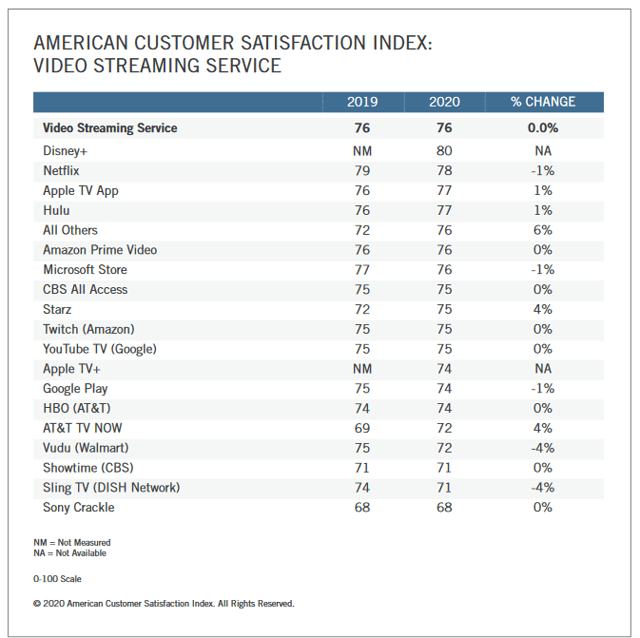 Amazon Prime Video has millions and millions of subscribers. Nevertheless, its users get the video streaming service for free when they already have an Amazon Prime subscription which costs $119 per year, that’s cheaper than a Netflix subscription and includes free shipping on Amazon.com. While this is great that likely indicates that Amazon Prime Video is currently losing money, Netflix is profitable. And users are more satisfied with Netflix, even when it is more expensive, again showcasing that it creates value for users.

So what makes Netflix’s service so valuable? Netflix seems to find the right balance between quality and quantity. While Disney+ clearly has the most qualitative library of series and films, Amazon Prime Video, on the other hand, has a lot of series and films no one wants to watch.

Netflix is no longer the streaming service that spends the most on content. When you start taking into account what streaming services spend on content per subscriber; Netflix would probably be relatively low on the list. That is great, it showcases that Netflix’s catalog is strong and that it does not require incredibly high expenditures going forward – but it’s clear Netflix needs to continue to invest vast sums of money into Netflix Originals. Competitors are throwing huge sums of cash at content to acquire users, Netflix’s primarily goal is no longer acquiring users but holding users, something that they have done with major success until now. 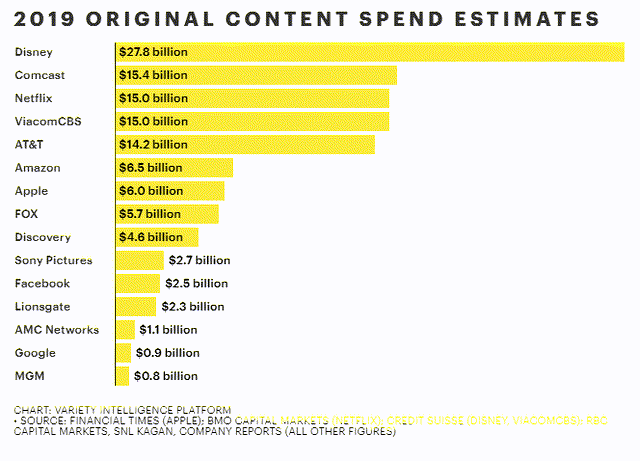 A very important point that needs to be made is: the video streaming market is not a zero-sum game. Households with at least one subscription for a video-on-demand (SVOD) service have on average nearly 3 different subscriptions. Showcasing that intensified competition does not necessarily create a zero-sum game. 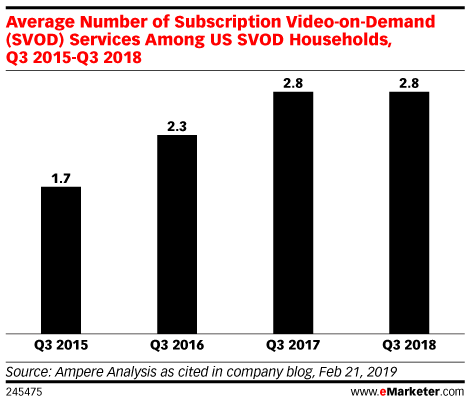 To conclude this paragraph, Netflix has been able to use its vast diverse catalog to remain competitive amongst a field where competitors underpriced Netflix’s service. It shows that Netflix has a moat.

In Q4 2019 Netflix had 167.09 million paying subscribers, while they burned 2.887 billion dollars of cash in operating activities. Consequently, Netflix lost $17.3 in cash per subscriber. Netflix is continuing to invest vast sums of money into expanding its catalog of original content. They believe content is what makes or breaks the platform, and I suspect that they are right. That’s why the cost per new subscriber has risen significantly over the last few years – high-quality original content is expensive.

In 2020 the company shortly became cash-flow positive due to the pandemic. This halted movie productions, while the number of paying subscribers grew at an immense pace. As management elaborated Netflix will start burning cash again in 2021:

‘Going forward, we do expect to turn cash flow negative again in 2021 and as our business and our production ramps up, but we’re still on that multiyear path to being cash flow positive.’ ~Spencer Neumann, CFO

While the company is currently profitable, the expectation is it will continue to burn vast amounts of cash in the coming years to produce content. Investors and management hope that eventually that huge content library will bear its fruits – at that point, Netflix will start to generate substantial free cash flows. 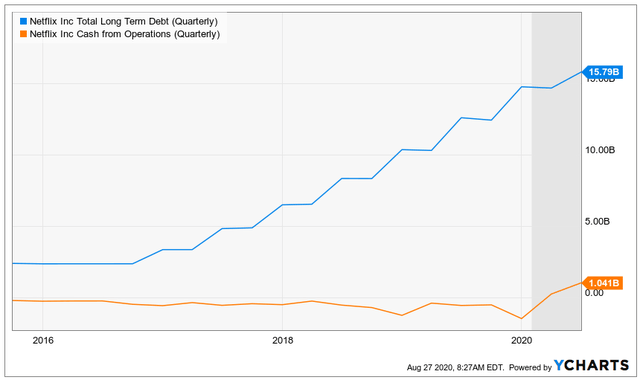 Management points to the 2020 cash flow levels as ‘a unique window into that forward-looking cash generation opportunity or potential for our business’.

The reality is that Netflix has burned tons of cash over the last few years and this has led to a massive growth of its long-term debt. Currently, its long-term debt is equivalent to approximately one year of EBITDA, which is reasonable, but eventually that EBITDA needs to lead to positive cash flows. Otherwise, those paper profits remain purely fictional. 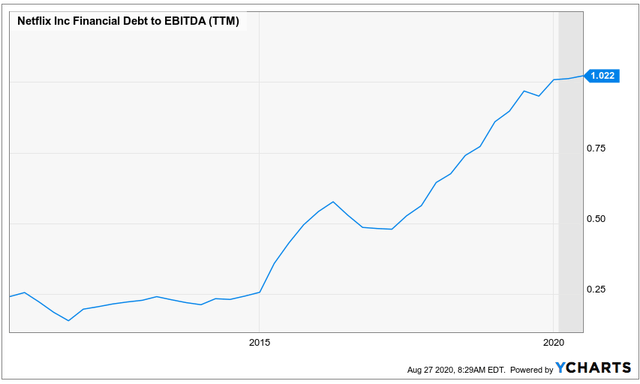 While a price to earnings ratio of 91.23 seems expensive at first glance, considering the company’s growth prospects; Netflix’s valuation seems reasonable. For example, its PEG ratio at 0.68 signals an opportunity growth may be underpriced. However, the earnings will only reward shareholders if the company starts generating consistent free cash flows – instead of investing huge sums of cash into the business. At the end of the day, a stock’s value is depended on its future cash flows. 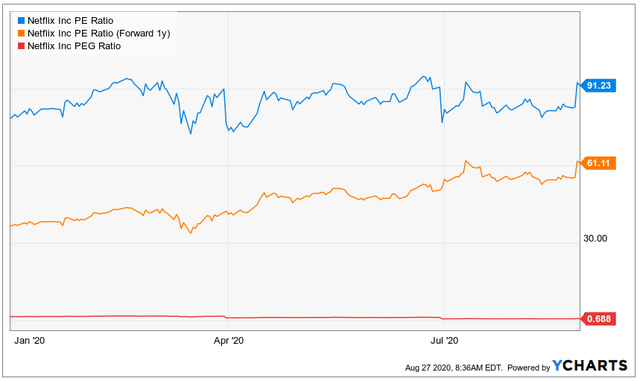 Whilst Netflix is experiencing increased competition, this should not worry investors too much. Netflix currently has a tremendous value proposition to its clients thanks to its diverse catalog, and I suspect this will not change. The streaming landscape is not a zero-sum game, and it is clear Netflix will play a major role in this field for decades to come.

Disclosure: I am/we are long DIS, LGF.B. I wrote this article myself, and it expresses my own opinions. I am not receiving compensation for it (other than from Seeking Alpha). I have no business relationship with any company whose stock is mentioned in this article.