Microsoft Stock: More Than 15 Years To Break Even – What You Should Consider Before You Buy (NASDAQ:MSFT)

Microsoft (MSFT) is an excellent company that has created enormous profits for its shareholders over the decades and affects all our lives every day. However, I sometimes have the impression that the laws of reason no longer fully apply to the stock markets. Microsoft is one such example. I am currently having difficulty seeing real value for shareholders in the stock. Please do not misunderstand me, I am not short, and I do not want to promote a short call here. Investors who want to buy Microsoft shares now, however, should consider some aspects before getting started. And these aspects are precisely what I want to address in this article. These considerations currently instead lead me not to invest in Microsoft.

If we initially take a longer-term, forward-looking perspective, there are enough bullish catalysts that make further growth likely for the operating business. The company is in an excellent momentum. We see years of growth in all business segments. 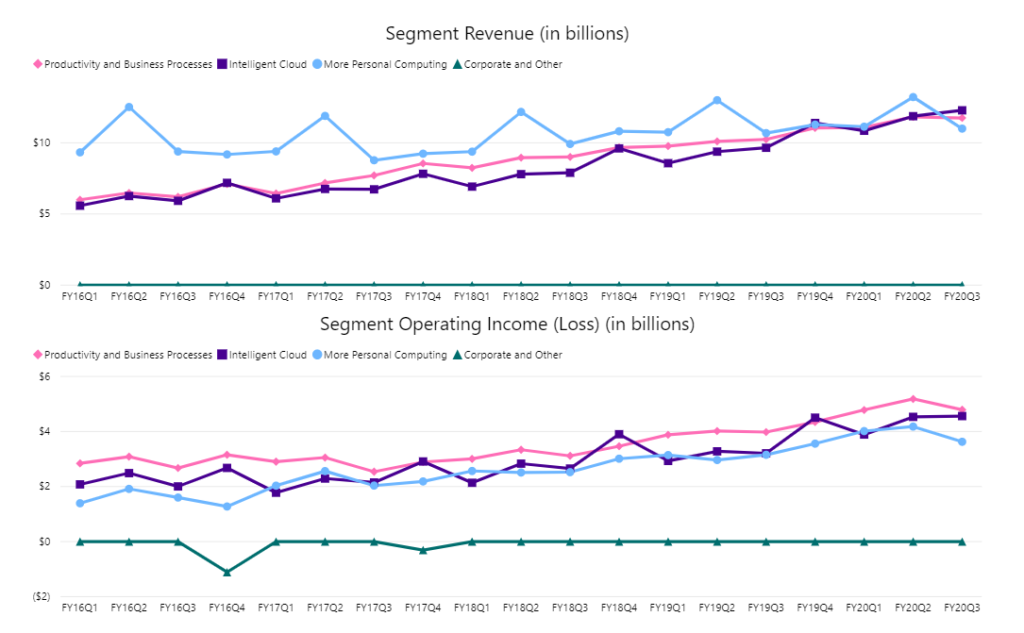 Microsoft saw substantial growth in all of its segments; Source: MSFT investor relations.

Furthermore, Microsoft faces excellent fundamental prospects, which, in addition to gaming and the traditional business areas, are now primarily affecting the company’s cloud business. Bullish investors point here to the expected growth in all areas of cloud computing and Microsoft’s strong position in this market behind Amazon’s (NASDAQ:AMZN) Azure Cloud business. This strength, of course, justifies a price premium and the coronavirus crisis also highlighted it once again. The effects of the coronavirus crisis were limited for Microsoft. The company even recorded an increased demand for its products in the “Personal Computing” and “Intelligent Cloud” segments. It seems that the company’s services and products are now indispensable for the everyday life of many people.

Microsoft has recently even managed to increase its margins significantly, which has only strengthened the bullish mood even further.

The pace of growth could slow

However, there are already indications that the pace of growth could slow down somewhat. In the last quarter, Microsoft increased its revenues by 14 percent. The growth is in line with the average growth of the previous quarters. If we look closer, cloud revenue growth was below 50 percent for the first time, which is, of course, still an impressive growth but also a sign of consolidation. It is not unlikely that Microsoft will approach the market average growth rate of between 14 and 20 percent in the coming quarters and years. 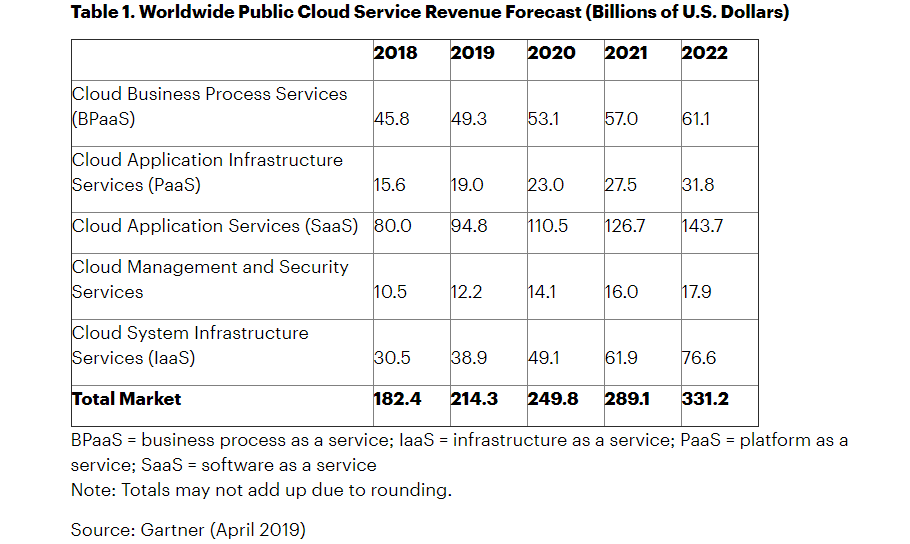 This could also have an impact on the overall revenue development. Competition in the cloud business will continue to increase. This can have far-reaching effects on margins and profitability, as a look at Alibaba (BABA) shows. It is not a law of nature that the cloud business is always highly profitable. For example, Alibaba is making massive losses in its cloud business as it tries to catch up with competitors such as Amazon and Microsoft. While the losses in 2017 were 250 million USD, they amounted to 821 million USD in 2019.

It is also not unlikely that a certain saturation will occur in the “Productivity and Business” segment with Microsoft’s Outlook products. At some point, most people have an Office subscription. Of course, Microsoft has other growth catalysts, e.g., the “Dynamics” product line introduced in 2016. Microsoft Dynamics comprises various services that offer companies opportunities to analyze and manage their data, resources, and customer relationships (especially in the CRM business). But Microsoft is facing strong competition, especially from Salesforce (CRM), which also reported a strong 28 percent Y/Y revenue growth.

Therefore, in the long run, the speed of growth will probably remain in the current range rather than continue to increase significantly. So, I’m not painting a gloomy picture of Microsoft, but saying that the company will grow normally in the future, so you shouldn’t expect it to explode.

Before the dot.com or tech bubble burst, investors were convinced of the possibilities of the Internet, digitalization, and technical progress. Microsoft, it seemed, was the gatekeeper to this world with its Windows operating system and the Internet Explorer. The investors saw themselves at the beginning of a vast cycle. And Microsoft was able to keep its promises. By 1999, the company had increased its annual revenue by 30%. Besides, Microsoft was profitable even then and was able to increase its profits more than five-fold from 1995 to 2000.

But then, the bubble started to burst, and Judge Thomas Penfield Jackson decided that Microsoft had violated the Sherman Antitrust Act due to abusive behavior, which only accelerated the bursting of the tech bubble. You know the rest of the story.

Do not extrapolate past price gains into the future

Investors like to look at the last ten years at Microsoft and are completely overwhelmed by the massive price gains. Since the bottom of the Great Recession in March 2009, Microsoft shareholders have achieved an annual return of 25 percent. You know, of course, that it is a mistake to extrapolate past gains into the future, so if you are considering investing in Microsoft now, we should exclude previous gains from our considerations.

Those who were unlucky had to wait 15 years for profits

So, when I urge caution at Microsoft from a value investing perspective, I am not saying that I don’t trust Microsoft to continue to grow. On the contrary, Microsoft is an excellent company and will continue to shape the technological progress and benefit from this development. The question is only whether and how this will be reflected in the share price. And from a value perspective, a company must also justify an increase in value with an increase in its operating business. You can see in the phase after the tech bubble has burst what can happen if this interaction between operational and share price development is disrupted. To remind you, between 2000 and 2016, Microsoft increased its revenue by more than 400 percent and almost tripled its profits.

However, investors did not necessarily benefit from this success, depending on the date of purchase. Look at how Microsoft shares suffered when the bubble burst and what happened afterward. Shareholders who bought at the height of the tech bubble suffered book losses of over 60 percent. They then had to wait 15 years before their Microsoft investment brought them back into the black. 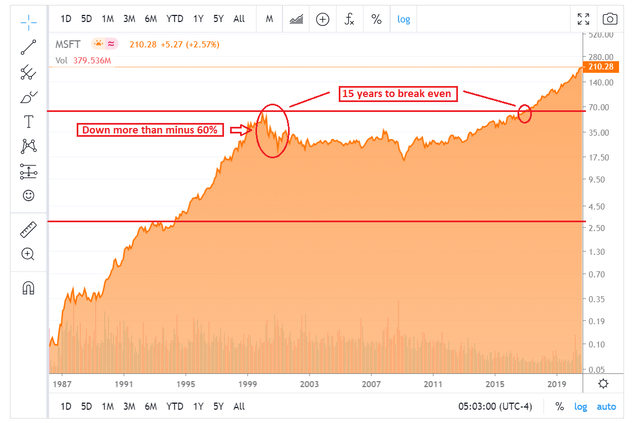 Source: Advanced MSFT Chart on SA; Investors who bought at the peak of the tech-bubble had to wait a very long time before they saw their breakeven.

From Microsoft’s past, you can see that even a growing company does not necessarily guarantee share price gains. You can also see that investors who made the most profit were those who had the courage to buy Microsoft shares when sentiment was terrible. In the meantime, we are now back in a valuation range that corresponds to that after the tech bubble burst.

The market had already once declared Microsoft dead

What you should note, however, is that Microsoft was not always this success machine. Like IBM (IBM) today, Microsoft has long been described as a dying dino without a future. Many investors feared that the triumph of the Internet, smartphones, and tablets would turn Microsoft’s Windows into obsolete technology. They were afraid that the much smaller competitors Google (GOOG) (NASDAQ:GOOGL), Facebook (FB), and Apple (AAPL) would push Microsoft out of the market. The culmination of disappointment was the billion-dollar purchase of Nokia in 2013, which looked like an act of desperation doomed to failure. Apart from the rebound rally after 2009, only the current CEO, Satya Nadella, who took over 2014, has breathed new life into the stock. You probably know that too.

So my question is, what will happen in the next disruptive technology or service generations that we do not know yet? They won’t send Microsoft to its doom, but that’s not the point if you just look at the share price. When the market withdraws love from a company, the company can go downhill for a long time, despite growth. If somebody tells you about the volatility of stocks, it has nothing to do with smaller setbacks. Even 10 percent is far from a crash. The V-shaped recovery after the COVID-19 crash is the exception rather than the rule.

So, if you buy Microsoft shares now, you have to ask yourself what you will get in return. Also, you might wonder what the difference is to the beginning of 2019 when the share costs less than half. What has changed since then to justify a price more than twice as high? I can only speak for myself, and perhaps the share price will continue to rise, and I will miss returns, but at the moment, I see no reason to buy Microsoft shares.

If you enjoyed this article and wish to receive other long-term investment proposals or updates on my latest portfolio research, click “Follow” next to my name at the top of this article.

Disclosure: I am/we are long IBM, AAPL. I wrote this article myself, and it expresses my own opinions. I am not receiving compensation for it (other than from Seeking Alpha). I have no business relationship with any company whose stock is mentioned in this article.