This is the ninth report detailing how each stock in my regional bank portfolio has performed during the first half of the calendar year. This article deals with Mars Bancorp (OTCQX:MNBP), which I highlighted on October 11 of last year. MNBP is a holding company for Mars Bank located in Mars, Pennsylvania. The bank was founded in 1900 and has five locations situated in Butler, Beaver, and Allegheny counties. MNBP has $422 million in assets with a market cap of about $26.5 million.

Since the recommendation, the bank has returned -12.20% (per Seeking Alpha), comparing favorably to the benchmark (QABA) return of -22.79%. My portfolio is down about 12% YTD compared with a -30% return from QABA but that’s nothing to be proud of as the S&P is up almost nine percent since that time.

MNBP released its second quarter earnings on July 24. Table 1 compares the annualized year to date results to other years.

As with all of my post-pandemic banks, the loan loss provision immediately jumps out. The bank has put $100,000 into their reserves this year while the figure was only $15,000 all of last year. This is almost a full dollar per share lost due to COVID-19. Another takeaway is the deposits and loans are going up as we’ve seen with the other banks due to the Government Stimulus Programs. From the report:

The Bank participated in the Federal Payroll Protection Loans program in response to the pandemic and produced approximately $15.1 million most of which are outstanding at June 30, 2020. In addition, a majority of these funds were deposited with the Bank some of which still remain at June 30, 2020.

The bank still appears solid. Again, from the report:

Book value is up, and P/B is down to .67. On the negative side, P/E (annualized) has stayed up around 14.5 while ROE, ROA, and net interest margin remain very pedestrian. A further sour note is that the dividend payout ratio remains over 50%, which is high by any standard.

Next, let’s compare the year to date performance with 2019. This is shown in Table 2.

Net income is down but earnings are higher and, much like North American Savings Bank (NASB), the biggest reason is an increase in non-interest income. This is addressed in the Quarterly Report:

Non-interest income increased by $538,000 or 50.6% for the six months ended June 30, 2020, as compared to the same period in 2019. The primary reasons for this increase were higher residential mortgage sale income of $382,000, realized gains on investment security sales of $152,000 and insurance services income of $37,000. These increases were partially offset by lower Federal Home Loan Bank stock dividends of $31,000.

Non-interest expense increased by $244,000, so we have a net gain of $294,000 in non-interest areas or $3.67 per share. Thus, earnings would be quite a bit lower than last year, although taxes would have been lower, so it wouldn’t be the full amount. Is this a one-quarter phenomenon or a new paradigm shift in banking? I have no idea and will have to look at future quarters to see if this trend continues.

With the financials out of the way, let’s look at why I recommended the stock almost a year ago and see if those factors are still relevant.

One of my main reasons for recommending MNBP was the stability as it had not traded outside of a ten percent range ($370-450) in the last nine years (Table 3). 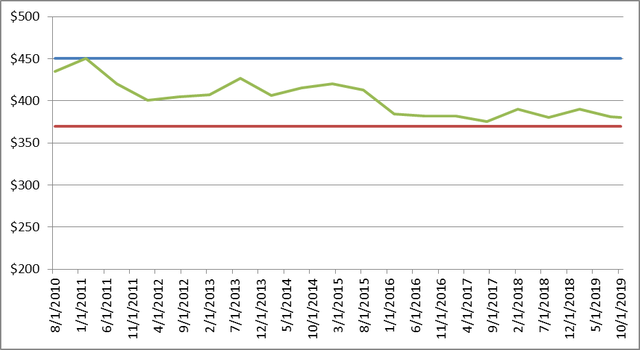 Alas, when you have pandemics, things like this don’t seem to last (Table 4). 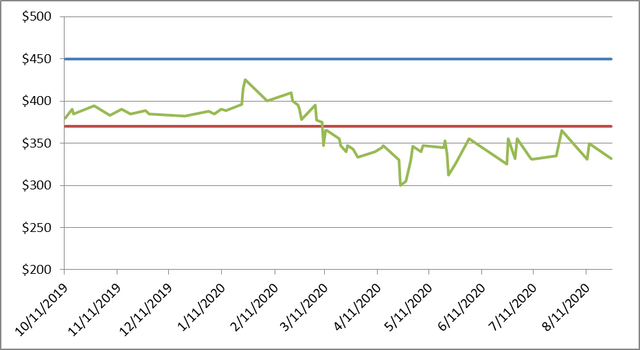 The price is around $332, which is about eight percent lower than it has been in ten years. As badly as Regional Banks have been crushed by the pandemic, I’m going to give the bank a pass on this as it has held up better than most.

I liked the bank because it appeared to be strong and conservatively ran and it still does. Non-performing loans remain a very low .05% and the loan to deposit ratio is only 76% whereas the average L/D in Pennsylvania is at 95%. Without the payroll protection loans, which are guaranteed by the SBA, the L/D ratio would be only 72%. As I pointed out in my first article, a low L/D keeps the other ratios down.

I liked the dividend rate which was a little over three percent at the time. It has grown to about 3.5% now. Although the dividend payout is over 50%, I am confident the dividend will be maintained if at all possible as insiders own over half of the 80,000 shares outstanding and should be interested in maximizing shareholder value.

I like the bank and remain bullish on its prospects in these turbulent times. As I just sold my shares of NASB, I feel I should buy another bank in my portfolio (I currently have Katahdin Bankshares (OTCQX:KTHN) and Parke Bank), so I will put in a limit order to buy at least 30 shares of MNBP shortly after the publication of this article (but no sooner than 24 hours). But I can see some pushback if you’re worried about the lack of growth in net income and the repeatability of non-interest income. As always, please do your own due diligence and buy only with a limit order.

Disclosure: I/we have no positions in any stocks mentioned, but may initiate a long position in MNBP over the next 72 hours. I wrote this article myself, and it expresses my own opinions. I am not receiving compensation for it (other than from Seeking Alpha). I have no business relationship with any company whose stock is mentioned in this article.