Several years ago, when Amazon (NASDAQ:AMZN) bought Whole Foods, many people thought it would mark the end of traditional grocery retailers like Kroger (KR). When the announcement was made back in June ’17, Kroger’s stock tumbled over 26% in two days. Kroger has survived Amazon’s entry into the grocery space, and the company has evolved and appears to be doing quite well. The company is set to report fiscal second quarter results next week, and analysts expect the company to show solid earnings and revenue growth for the quarter.

As good as those growth numbers are, they aren’t nearly as impressive as the first quarter numbers. Earnings were up 69% in the first quarter when compared to 2019, and revenue jumped by 12%. Of course, these numbers are getting a boost from the current health crisis as people are forced to eat at home more frequently. Even without the current health crisis, Kroger has seen earnings grow by an average of 7% per year over the last three years, but revenue has only increased by 1% per year.

Kroger’s return on equity is above average at 21.7%. The profit margin is 1.8%, and that is low compared to other companies, but it seems to be in line with other grocery retailers. The current valuations for the stock are pretty low, with a trailing P/E of 13.85 and a forward P/E of 13.0. The company does pay a dividend with the current yield at 2.0%.

Overall, the fundamentals of Kroger are pretty solid. Kroger is the top-rated stock in the Retail-Super/Mini Markets Group from Investor’s Business Daily. That rating system measures a number of fundamental and technical factors.

A Trend Channel is Still in Place

I wrote about Kroger when it was set to report first quarter results back in June. In that article, I pointed out a trend channel that had formed on the weekly chart. The channel goes back to last summer and has pretty clearly defined the different cycles within the overall upward trend. 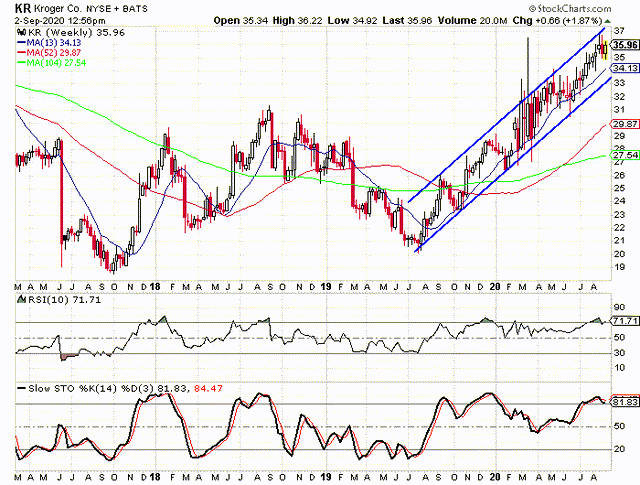 The rally over the last three months has caused the overbought/oversold indicators to move into overbought territory. The 10-week RSI moved above the 70 level toward the end of July, and the stochastic indicators moved above the 80 level in early July. The RSI hasn’t been in overbought territory very often over the last three and a half years, and when it does breach the 70 level, it doesn’t tend to stay there for very long.

Sentiment Remains Skewed to the Bearish Side

Analysts are far more bearish toward Kroger than they are the average stock. There are 27 analysts covering the stock at this time with 10 “buy” ratings, 15 “hold” ratings, and two “sell” ratings. This puts the buy percentage at 37%, and that is about half as high as the average buy percentage. The buy percentage was at 44% back in June, but I used the Wall Street Journal as my source back then, and the new source is Seeking Alpha. 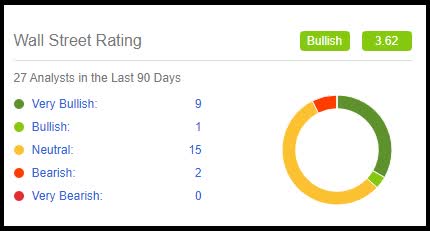 Back in June, only one of the three sentiment indicators showed signs of optimism, and that was the put/call ratio. The same is true today. There are 76,890 puts open and 120,933 calls open at this time. This gives us a put/call ratio of 0.636, and that is well below the average ratio. Kroger’s ratio was at 0.743 ahead of the first quarter earnings report, and it has been below average ever since. The highest the ratio has been is 0.81, and the low was 0.58.

The overall sentiment is skewed to the bearish side with analysts and short sellers both expressing pessimism toward the stock. Option traders are more bullish, and that keeps it from being a clean sweep for bearish sentiment.

My Overall Take on Kroger

I am still bullish on Kroger with the solid fundamentals and the upward trend in the stock. The fact that there is pessimism directed at the stock means that all three forms of analysis are aligned and indicate the trend higher should continue. A small pullback or a consolidation period would move the stock out of overbought territory and would allow the lower rail of the channel to catch up to the stock. This would provide a very timely buying opportunity.

Over the last eight quarters, Kroger has beaten estimates six times and missed on two occasions. The beats haven’t always led to big jumps, and the misses haven’t always led to big gaps lower. Overall, there seems to be more of a pattern for the stock to dip slightly after earnings reports. None of the declines have been all that big, and I don’t know if it is worth waiting until after the report to buy the stock.

Investors should probably go ahead and buy the stock if they are considering adding Kroger. The lower rail is currently in the $33.50 area, and that is only about 7.5% from where the stock is trading now. Counting on that precise of an entry point would be a bit of a reach, in my opinion. As long as the stock remains in the channel, I recommend holding the stock.

If you would like to learn more about protecting and growing your portfolio in all market environments, please consider joining The Hedged Alpha Strategy.

One or two option recommendations per month

A weekly update with my views on the market, events to keep an eye on, and updates on active recommendations