Konami May Be Poised For A Comeback (OTCMKTS:KNMCY)

Since the 1990s, Japanese game developers have sought to stabilize the infamously volatile cash flows associated with multi-year game development cycles. However, what was once fruitful diversification into the realms of arcade management, licensed goods retail, or esports has become a liability in the coronavirus pandemic era.

Instead, like the other ‘Big 4’ Japanese game developers, Konami (OTCPK:KNAMF; OTCPK:KNMCY) has seen digital entertainment sales soar since March, with total revenues in digital entertainment up 36.0% YoY and operating profit up 57.9% YoY, while other segments have soured as arcades, sports facilities, and casinos were shuttered due to the pandemic. All in all, revenue and operating profit for the company as a whole are down, -6.3% and -32.4% YoY respectively. 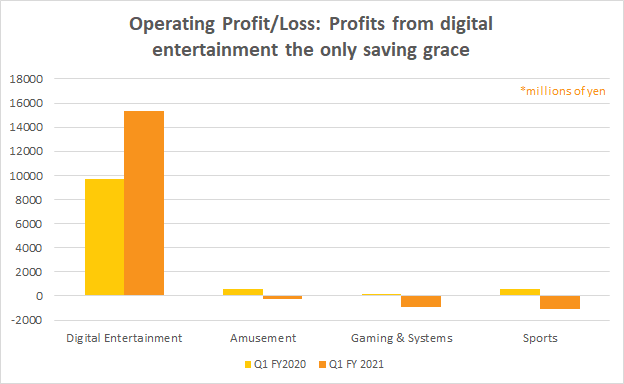 Amidst this backdrop of declining performance, Konami’s Tokyo-based shares have also lost about a tenth of their value year-to-date. Compared to those of its peers – Capcom (OTCPK:CCOEY; OTCPK:CCOEF), Bandai Namco (OTCPK:NCBDF; OTCPK:NCBDY), and Square Enix (OTCPK:SQNXF; OTCPK:SQNNY) – Konami’s shares have indeed performed the worst, but does this present an opportunity to buy or is it a signal to stay away?

If we take a deeper look, we find Konami shares to be selling at a considerably low price-to-book relative to its peers but a relatively higher price-to-earnings. This could suggest investors expect future earnings growth of Konami to exceed that of its peers in the future, but it could also merely be a reflection of Konami’s recent downturn. 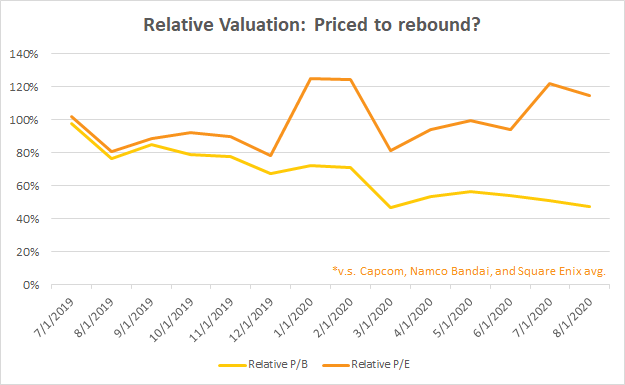 We can also observe the EV/EBITDA median for Konami’s peers over the past three years to be around 14x; Konami’s is currently around 8x, implying if Konami were to trade at a comparable EV/EBITDA multiple, shares would trade at around ¥7,040, or about 75% higher. However, it is worth noting Konami has traded at a lower relative EV/EBITDA multiple for quite some time.

Quantitatively, we can conclude Konami is undervalued in some respects, however, there are concerns aside from valuation to consider.

All the eggs in the Yu-Gi-Oh! basket

For one, especially with the recent downturn in Konami’s other segments, it seems Konami is heavily leaning on the growth of its Yu-Gi-Oh! franchise as well as its mobile sports titles, such as eFootball PES and Professional Baseball Spirits A. 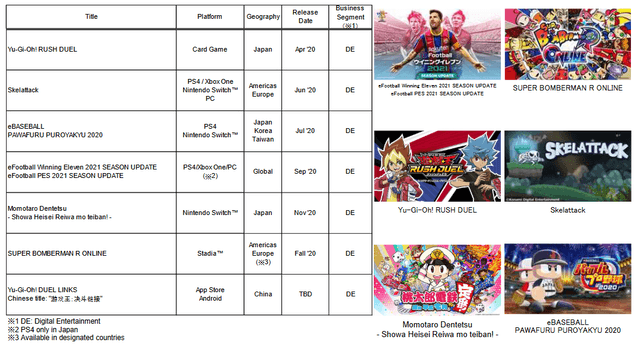 Its new card game format Yu-Gi-Oh! Rush Duels is a bet on whether fans will take to a new, simplified style of the classic card game; currently only available in Japan, it remains to be seen whether this new format can take on in the global market. What can be confirmed is that there has been renewed interest in the mobile/PC game Duel Links especially in the overseas market, with the app briefly reaching within the top 5 Cards/Games apps again in the Google Play Store in May.

The type of high ARPPU, freemium game model that has become the gold standard for game developers, Duel Links has gone through peaks and troughs in playership usually around major updates before, but its consistent player base over the years has been a cash cow for Konami. An upcoming release of Duel Links in China could promise to be a boon for the company. 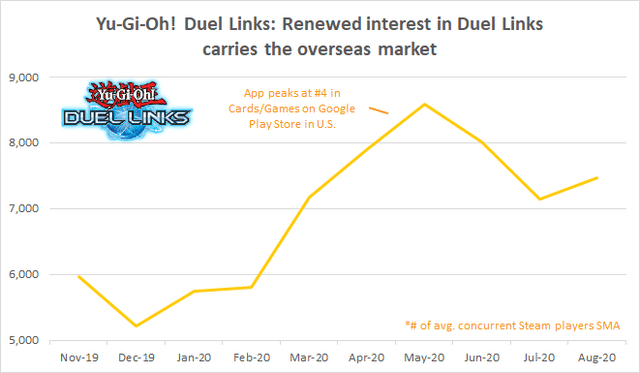 Konami’s mobile sports titles eFootball PES 2020 and Professional Baseball Spirits A have garnered some success as well, with the former achieving over 300 million downloads globally; however, with the exception of PES, Konami’s success in the realm of sports titles has mainly been relegated to the Japanese market.

That Konami’s prospects are now highly concentrated in a few areas – mainly in the Yu-Gi-Oh! franchise and various mobile titles – is necessarily a problem, albeit one self-inflicted and not all that surprising to those with knowledge of Konami’s troubled recent history. Compounded with the shuttering of casinos, arcades, and sports facilities due to the pandemic and the fact that these facilities will likely continue to have depressed sales even as they reopen, an investment in Konami looks like a big bet on the success of a few key franchises, even with the wealth of IPs that Konami possesses (most of which are currently not being utilized except in the realm of arcade and pachinko machines).

However, is all that about to change? To answer that question, one can glean some highly elucidating information from the balance sheet.

Ironically, despite having the largest amount of cash available in absolute terms compared to the other of the ‘Big 4’, Konami’s balance sheet looks like one of the least attractive. 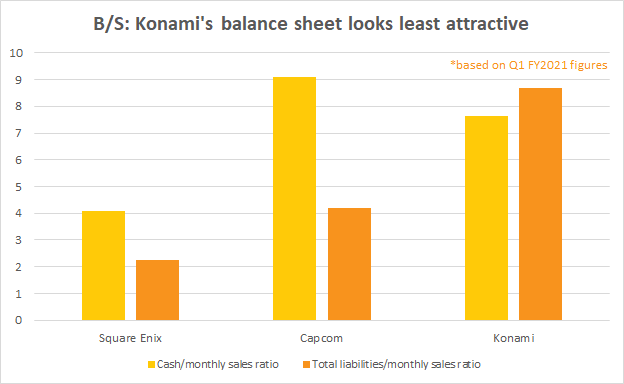 That is because Konami has been packing on debt at an accelerated pace since the beginning of this year. Since September of 2019, Konami had added about $230 million of long-term debt according to its most recent earnings filings. However, this is not the full extent of Konami’s borrowings as the company noted under an addendum titled “Subsequent Events” that it had actually issued three more unsecured bonds valued at about $561 million not included in the balance sheet figures. 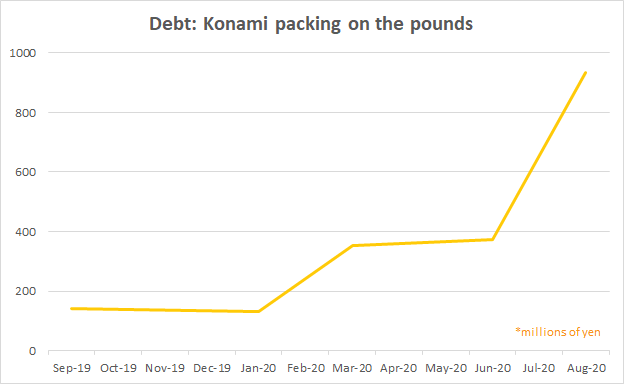 Konami has not added this level of debt for over a decade and what Konami exactly plans to do with the capital is a mystery. Besides a generic statement that the use of the funds will be “…for investment and lending, capex, and repayments”, Konami provides no details as to the proportions or precise use of the debt. Presumably (and hopefully), Konami is preparing to make some sizable initial investments in packaged games development (perhaps in one of its underutilized IPs); however, considering Konami has largely moved away from that model, that may be unlikely.

What Konami plans to do with all this capital is anyone’s guess.

Konami has been in somewhat of a rut for several years now; this is reflected in the stagnant revenues, declining profits, and slumping share price. In fact, if one can even consider Konami as one of the ‘Big 4’ Japanese developers anymore is up for debate. One thing is for certain: any bet on Konami currently is inextricably a bet on the success of its Yu-Gi-Oh! franchise and mobile sports titles. But, with this new influx of debt in addition to its already massive cash pile, could the company be prepping for some large-scale investment in new game development or M&A? Whatever it is, it will be big.

Editor’s Note: This article discusses one or more securities that do not trade on a major U.S. exchange. Please be aware of the risks associated with these stocks.

How To Turn On Your Productivity Super Powers

In the real world, people cannot perform at their best 24/7. We aren’t machines that

I had, and still have, a message I want to share with those that will

Advice for Influencers from Brands and Agencies