GasLog: May Have More Potential Than The Market Realizes (NYSE:GLOG)

GasLog Limited (GLOG) is one of the largest owners and operators of liquefied natural gas tanker ships in the world. This is a sector that has been hit very hard by the outbreak of the COVID-19 pandemic and this is reflected in the company’s recent stock performance. This poor performance may not reflect the long-term fundamentals, however, and there are some reasons to be confident about the future of both the industry as a whole and of GasLog in particular. Indeed, GasLog continues to have much of the growth potential that it had prior to the pandemic. As such, there may be an opportunity here for investors that are willing to take a chance on the company.

GasLog Limited is one of the largest owner-operators of liquefied natural gas tankers in the world. The company wholly owns twenty such tankers, four of which are still under construction: 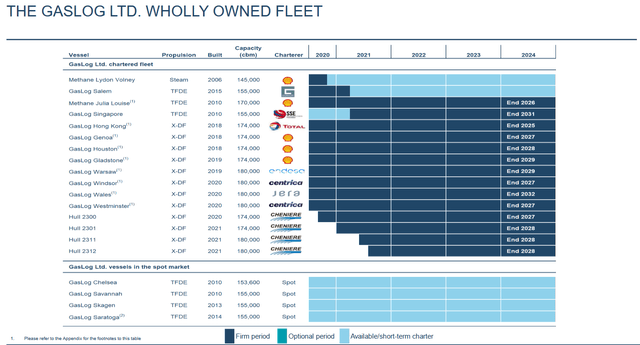 GasLog is also the general partner and largest individual unitholder of GasLog Partners LP (GLOP), which owns another fifteen such tankers: 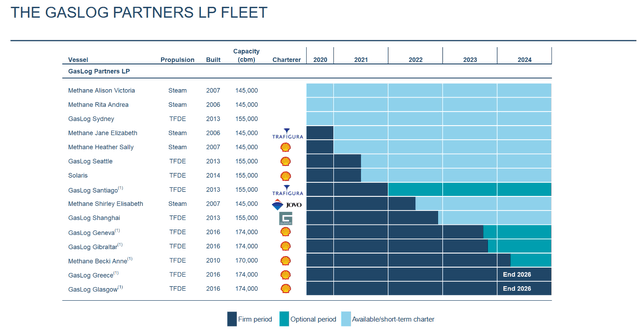 The demand for these tankers continues to grow even though the pandemic did prove to stall it for a while. GasLog has been taking advantage of this demand growth by adding more vessels to its fleet. So far this year, the company has received three new vessels with a fourth one scheduled to arrive in October. The company then has three new vessels scheduled to arrive next year. This should stimulate the company’s forward growth as they arrive. This is due to the business model that the company uses. There are two ways in which shipping companies earn money. The first is by chartering their vessels out for a single voyage on which the vessel’s price is set based on a market spot rate. The second way is by chartering the vessel out on a long-term contract. The second option is generally preferable because long-term contracts insulate the shipping company’s revenues against short-term declines in the spot rate like the one that accompanied the COVID-19 pandemic. GasLog secured long-term contracts for all of these new vessels before it even began constructing them and the ships are starting work on them as they are delivered. Thus, we can be confident that they will stimulate growth. We can see here the future revenues that the company has guaranteed by its current contracts: 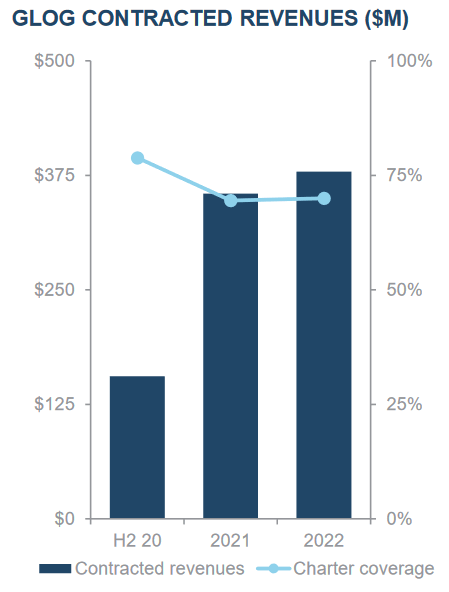 As we can clearly see, GasLog should be able to generate substantial revenue growth in 2021 because of the already-contracted newbuilds that the company has already added and will be adding to its fleet over the next year or so. This provides the company with a clear path to growth through the end of 2022.

As mentioned earlier, the liquefied natural gas shipping market was negatively impacted by the COVID-19 outbreak and the resulting economic shutdown. Globally, the demand for liquefied natural gas was 2% lower in the second quarter of 2020 than it was in the second quarter of 2019. However, demand was actually up 4% in the half of the year compared to the first half of last year:

Thus, the impact of the pandemic on demand was certainly real but it was not as great as what many expected. Wood Mackenzie expects that this demand growth will continue going forward. The firm expects that global demand will grow at a 3% compound annual growth rate over the 2020-2025 period. Royal Dutch Shell (RDS.A) provided further clarification on this in its 2020 LNG Market Outlook. According to its research, liquefied natural gas demand will double over the 2020 to 2040 period: 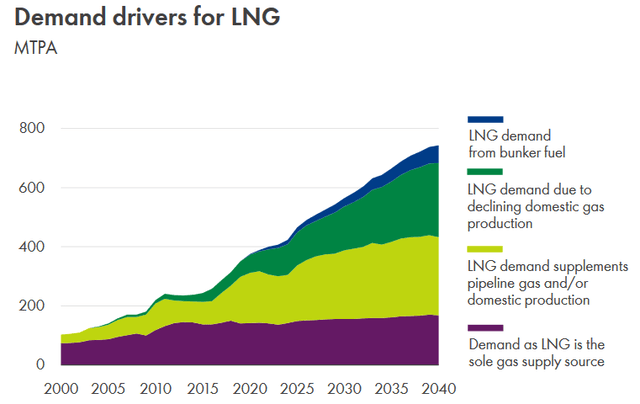 The growth in liquefied natural gas demand will drive demand for tanker ships like the ones that GasLog operates. This is because these vessels are the only way to transport liquefied natural gas over the ocean. Thus, the industry will need to add more vessels to its fleet going forward in order to meet this demand because every vessel has only a limited capacity of resources that it can carry. This should, therefore, drive revenue growth for the owners of these tankers.

As we can see, in the second quarter, spot fixtures were up 64% year-over-year. This was in direct defiance of the global economic shutdown as well as the story that we have been hearing from commentators in the financial media about the industry being troubled. We can also see that the number of spot fixtures has been steadily rising since the third quarter of last year. This can generally be considered to be a positive sign. With that said though, this could also be a sign that the companies hiring these vessels are uncertain about the long-term demand for liquefied natural gas at the destination point and so are unwilling to commit to a long-term contract. There are a lot of reasons why a customer could be unwilling to commit to a long-term contract though, so we should not read too much into this. Either way, we can clearly see that the COVID-19 pandemic has not had a significant and lasting impact on the demand for liquefied natural gas or the demand for tankers.

As we just discussed, the COVID-19 outbreak and economic shutdown have not had a significant impact on the demand for liquefied natural gas or for tankers to carry it. This is reflected in the company’s second quarter results, which were generally better than what it usually reports during the second quarter:

As we can clearly see, revenues and adjusted EBITDA were both up year-over-year while adjusted earnings per share were down but not substantially (and they were still greatly improved from the second quarter of 2018). Despite this though, the company’s stock price has been absolutely devastated: 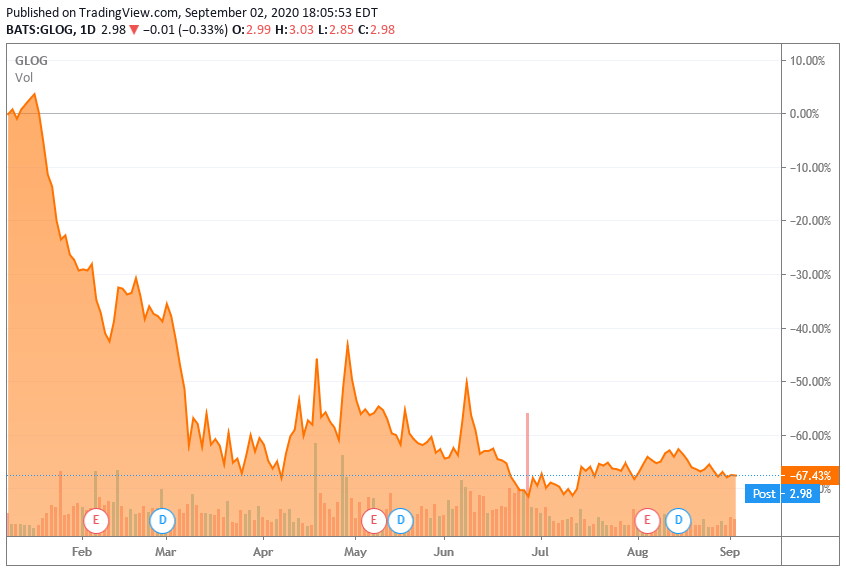 As we can clearly see, the company’s stock is down 67.43% year-to-date. This is highly unusual to see outside of a company teetering on bankruptcy. However, as just shown, the company’s results have generally improved and the industry itself does not appear to have suffered any lasting effects from the pandemic and the long-term fundamentals are reasonably solid with some growth likely to occur as GasLog’s newbuilds hit the water over the next two years. Thus, the market may have overcorrected here.

One thing that may have triggered this decline in the stock price is the fact that GasLog cut its dividend earlier this year to strengthen its balance sheet and pay down debt. This is certainly a good idea. As of June 30, 2020, GasLog had a net debt of $3.200128 billion and $627.794 million in common equity. This gives the company a net debt-to-equity ratio of 5.10. This could be a concern because debt is a riskier way to finance a company than equity is. This is because a company needs to make regular payments on the debt as well as eventually pay it off. This is not the case with equity. Thus, if something causes a company’s cash flows to decline, then this debt becomes more of a burden. The reason why GasLog has this debt load is because of the extensive fleet growth that the company has been engaging in but it still represents a risk so it is nice to see that the company is trying to get it under control even at the expense of the dividend.

In conclusion, GasLog does not appear to have been impacted nearly as much by the pandemic and the recession as what it appears at first glance. The industry itself is overall holding up reasonably well and the long-term outlook is still strong. However, the stock has been utterly pummeled by the market, which may be due to the high debt load and the fact that GasLog cut its dividend earlier this year. Overall though, the company’s future looks bright and this could represent an opportunity.

At Energy Profits in Dividends, we seek to generate a 7%+ income yield by investing in a portfolio of energy stocks while minimizing our risk of principal loss. By subscribing, you will get access to our best ideas earlier than they are released to the general public (and many of them are not released at all) as well as far more in-depth research than we make available to everybody. We are currently offering a two-week free trial for the service, so check us out!

Disclosure: I am/we are long GLOP. I wrote this article myself, and it expresses my own opinions. I am not receiving compensation for it (other than from Seeking Alpha). I have no business relationship with any company whose stock is mentioned in this article.

If you run Facebook ads, you need to understand Business Manager. And if you manage

A Brief Timeline of the History of Blogging

Search Engine Marketing, or SEM, is one of the most effective ways to grow your

What Is a Landing Page? All Your Questions, Answered

If you could do one thing to dramatically improve your marketing ROI today, would it

How to Get More Instagram Traffic : Social Media Examiner

How to Connect with Presidents, Royalty, & World-Class Celebrities with Terrence J