“They call it golf because all the other four-letter words were taken.” – Ray Floyd

Today, we take an in-depth look at a small oncology company that has some potential catalysts on the horizon. A full investment analysis is as follows. 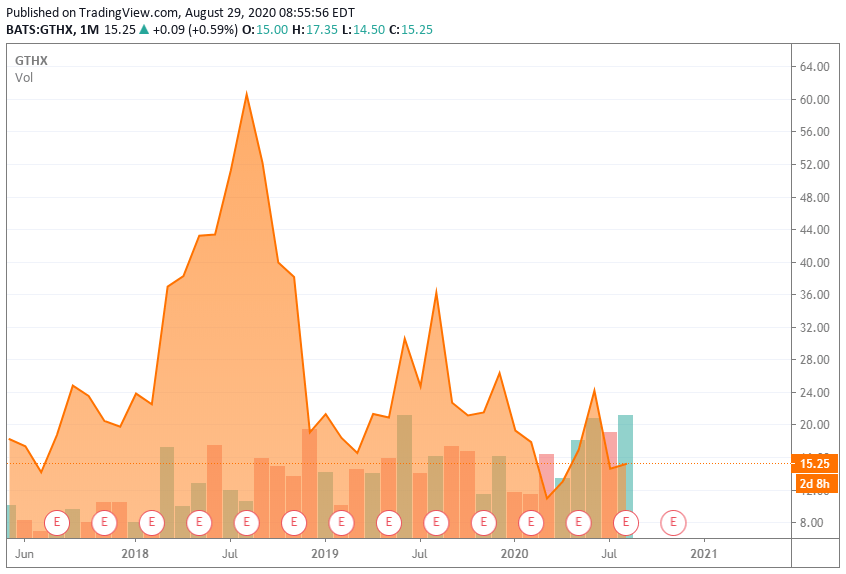 G1 Therapeutics (GTHX) is a North Carolina-based clinical-stage biopharmaceutical oncology company. The company’s pipeline is comprised of three product candidates, one which is in late-stage development, and two that are in early-stage development. The lead product candidate is called Trilaciclib, which is designed to improve outcomes for patients who are being treated with chemotherapy. Behind Trilaciclib, Rintodestrant is being developed to treat ER+ breast cancer and Lerociclib is designed to enable more effective combination treatment strategies. G1 Therapeutics has a market capitalization of approximately $575 million and trades for around $15.00 a share. 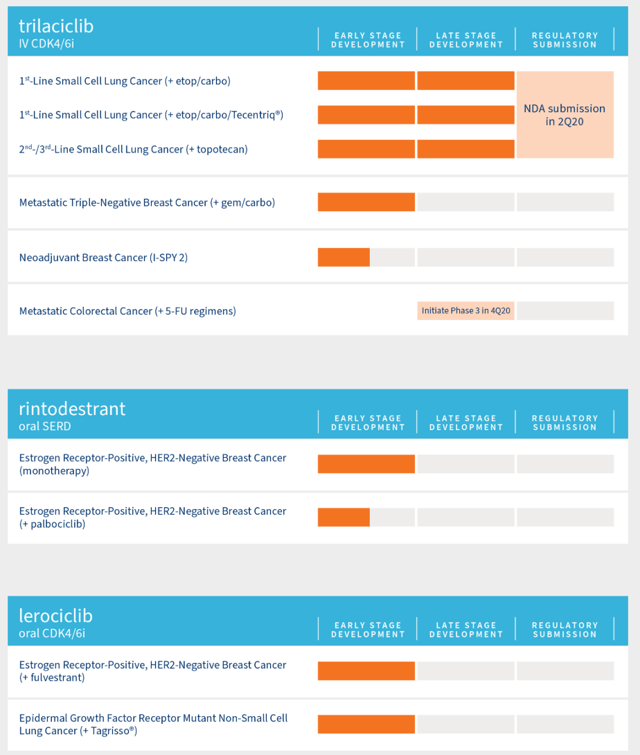 Trilaciclib is designed to improve outcomes for people with cancer who are treated with chemotherapy. The drug has been granted Breakthrough Therapy status by the FDA. Chemotherapy is a well-established and effective treatment for cancer, but it has a major problem in that it doesn’t differentiate between healthy cells and cancer cells. This lack of differentiation includes important stem cells in the bone marrow that produce white blood cells, red blood cells and platelets. As a result, chemotherapy-induced bone marrow damage known as myelosuppression can occur, which causes an increased risk of infection, experiencing anemia/ fatigue, and increased risk of bleeding. Trilaciclib acts to promote myelopreservation-preserving bone marrow function. 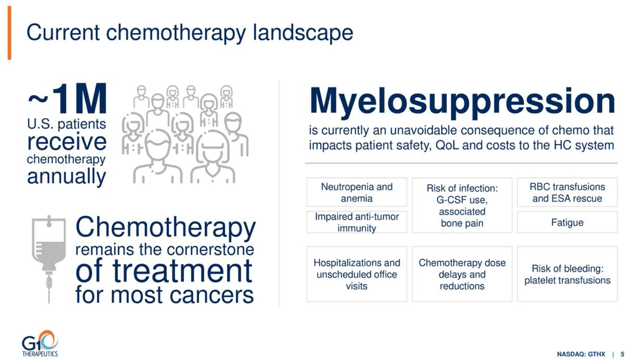 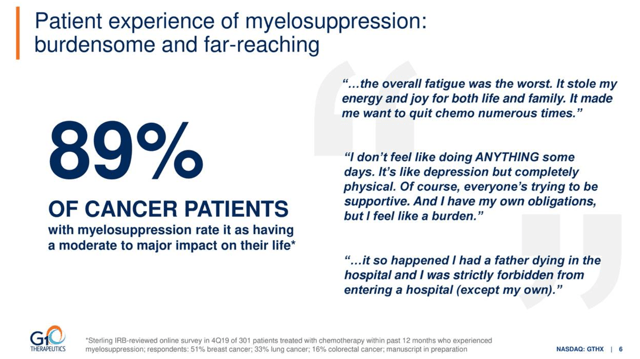 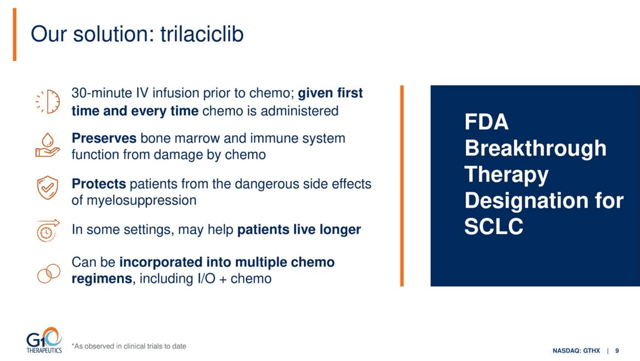 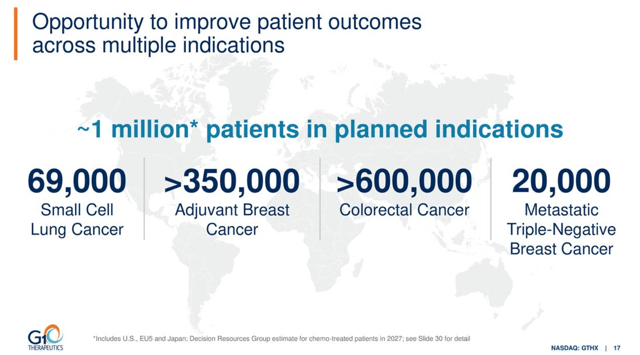 Recently, G1 Therapeutics inked a deal with Boehringer Ingelheim to co-promote Trilaciclib in the U.S. and Puerto Rico. The deal is a three-year agreement in which G1 will lead marketing, market access and medical engagement initiatives, while Boehringer Ingelheim will lead salesforce engagements. Per the terms of the agreement, G1 Therapeutics will make initial payments to BI to cover startup expenses and pre-approval activities having to do with a commercial launch. G1 Therapeutics will pay a promotion fee of mid-twenties percent of net sales in year 1, and then the fee will drop to low double digits to high single digits in years 2 and 3. The partnership does not extend to additional indications. 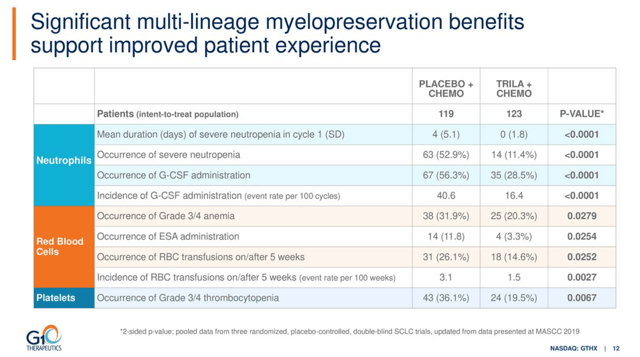 Lerociclib is a differentiated oral CDK4/6 inhibitor with potential use in combination with other targeted therapies in certain types of breast and lung cancer. Currently, the drug is being evaluated in two Phase 1/2 clinical trials: a trial in combination with fulvestrant for patients with ER+, HER2- breast cancer and in epidermal growth factor receptor mutation non-small cell lung cancer. 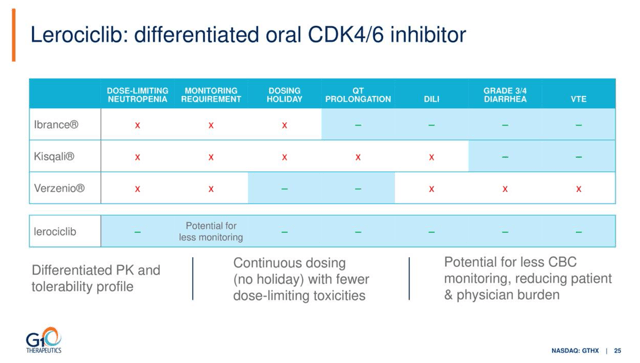 Lerociclib has grabbed the attention of pharma industry as of late. On July 23rd, the company announced an exclusive license agreement with EQRx for the development and commercialization of Lerociclib in the United States, Europe, Japan and all other global markets. G1 will receive an upfront of $20 million and will be eligible for milestone payments of up to $290 million plus sales-based tiered royalties. Also, on June 22nd, G1 Therapeutics signed a deal with Genor Biopharma that gives Genor the exclusive rights for the development and commercialization of Lerociclib in the Asia-Pacific region, not including Japan. Per the agreement, G1 received an upfront cash payment of $6 million and up to $40 million in milestone payments and tiered royalties ranging from high-single to low-double digits based on annual net sales of Lerociclib. 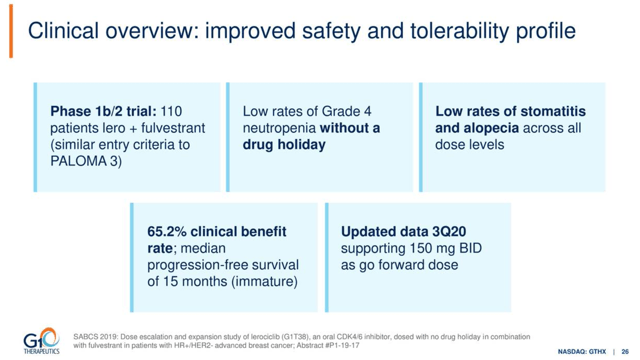 As of the end of the second quarter, G1 Therapeutics had cash and cash equivalents of roughly $240 million. The company expects to end FY2020 with $185 million to $200 million of cash and marketable securities on the balance sheet.

Overall, analysts are sanguine on the company’s prospects with a median analyst price target north of $60 a share. The most recent recommendation came on August 17th when both H.C. Wainwright ($82 price target) and Needham & Company ($74 price target) reissued Buy ratings when FDA accepted the company’s NDA application.

The company has a couple of “shots on goal“, is well funded and has potential upcoming catalysts on the horizon. That said it is aiming at a fairly crowded space. Analysts optimistic on the company. This would be a potentially good covered call candidate. Unfortunately, option liquidity is not deep enough most days to implement that strategy. A small “watch item” position for those that want more exposure to this niche seems the most prudent recommendation at this time.

“The golf swing is like a suitcase into which we are trying to pack one too many things.”- John Updike

Bret Jensen is the Founder of and authors articles for the Biotech Forum, Busted IPO Forum, and Insiders Forum.

Live Chat on The Biotech Forum has been dominated by discussion of lucrative buy-write or covered call opportunities on selected biotech stocks over the past several months. To see what I and the other season biotech investors are targeting as trading ideas real-time, just join our community at The Biotech Forum by clicking HERE.

Disclosure: I/we have no positions in any stocks mentioned, but may initiate a long position in GTHX over the next 72 hours. I wrote this article myself, and it expresses my own opinions. I am not receiving compensation for it (other than from Seeking Alpha). I have no business relationship with any company whose stock is mentioned in this article.