Fifth Third Bancorp (FITB), the 15th largest bank in the United States by asset size, reported back-to-back quarters of rather distressed earnings. In the first quarter, the bank reported a rather minuscule profit of just $0.04 per share. However, as local economies reopened and the economic landscape showed some stability, second quarter results did give off a sense elasticity when net profit per share of $0.23 was announced.

At first glance, it seems fairly obvious, but the main driver behind the difficult first quarter and sizable rebound in the second was a much more limited loan loss provision expense. After digging a little deeper, I backed out some non-core items and came away with core EPS of $0.14 in the first quarter and $0.33 in the second.

After I further examined the loan portfolio’s credit quality, current reserve levels, and modeled out the net interest margin (NIM) for the next few quarters, I come away with a fairly neutral bias with a positive skew for future profitability improvement.

However, because of the healthy 5.3% dividend, a stronger than average reserve level, and fairly insulated core fee income business, I would consider FITB to be a good investment over the medium term.

When thinking about the broader economic landscape, if fundamentals do get better I think FITB’s stock price will perform in line with peers, but the larger than average dividend will boost the total return to create a more sizable ROI.

On the flip-side, if things do turn a little direr, and you find yourself to be a current holder of the stock, the consistent earnings performance and very sustainable dividend should be more than enough to help you sleep soundly at night.

The one clear standout item that every investor should note is the limited linked quarter provision expense. The slightly smaller second quarter loan loss provision helped total earnings improve quarter over quarter, even with lower fee income and a higher expense base. Another thing I feel is noteworthy, the bank’s overall revenue trends actually deteriorated a little more than I would have guessed in the second quarter.

However, as one can see from a comparison from first and second quarter results, a slight reprieve in provision expenses gives new hope to renewed EPS growth. FITB has a reserve level that is slightly stronger than most super-regional peers and I think the bank should be viewed as being able to weather any adverse credit scenario just as good as almost every other major bank.

To give a more well-rounded view, I feel as though it is worth mentioning that FITB does typically have a Non-Performing Assets (NPA) level that is a little higher than average.

The salient point I am trying to make is that when I pull all this information together, I believe FITB has a pretty healthy loan portfolio that should have limited problem loans (when compared to peer banks). Also, the very strong reserve level should help insulate FITB from future EPS under-performance as less provisioning is needed.

During the second quarter, net charge-offs were $130 million, which equates to about 0.44% of average period loans. Putting that into perspective, FITB charged-off roughly 0.44% in the first quarter of 2020 and 0.41% in the fourth quarter of last year.

The sizable increase in the reserve with limited charge-offs indicates that management is hoping for the best, but preparing the balance sheet for the worst. The nearly nonexistent increase in charge-offs is actually a pretty remarkable feat given the recent once-in-a-generation economic volatility we have experienced over the past two quarters.

The one area that does give me a little pause is the total exposure to highly impacted COVID industries. Within the loan portfolio: “Leisure & Recreation” make up 6.8% of total loans, “Retail” makes up 3.0%, “Healthcare Facilities” make up 2.5%, and “Leisure Travel” rounds out the last of the COVID-impacted areas at 0.5%.

This totals 12.8% of the portfolio, which id down from 14.0% seen in the first quarter. While still higher than average, FITB does have a higher reserve, so I view it to be a bit of a wash in term of investment impact. 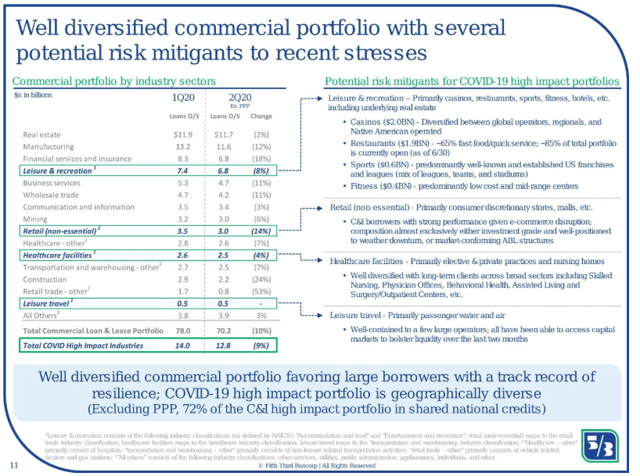 As I have written about with Huntington (HBAN),

One area I like to look at is criticized loans, as they are often a precursor for future losses. Remember, a criticized loan is one that is rated “special mention,” “substandard,” “doubtful,” or “loss,” and is now considered to have a higher risk of default. 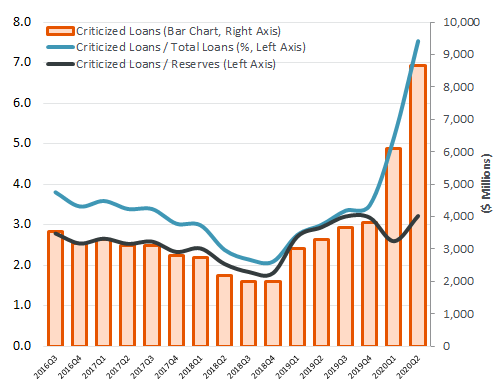 While even the most novice investor can read the chart above and garner that criticized loans have increased (orange bar chart) pretty dramatically. At first pass, this might seem like an insurmountable headwind to long-term investment. The most important takeaway from the chart above is that criticized loans over total reserves have fallen (black line) and is well within historical averages (~3.0x).

While FITB has seen some growth in criticized (or future problem) loans, management has been adding to the reserve; thus the large first and second quarter provisions. Overall, I feel pretty comfortable in my expectation that FITB should see some credit improvement as we work into 2H20.

One thing that is important to remember, if the overall credit reserve level is determined to be too high, either because the economy rebounds or simply stays flat, the income statement can have a negative provision.

That negative provision will eventually lower the reserve level but will also boost the income statement by adding to future earnings. That said, a boosted earnings level via negative provision typically doesn’t help overall valuation in terms of P/E since the “E” is not from operations. Most bank investors don’t give it much credit to the valuation when “E” is manufactured by bank management. However, a dividend is binary – it’s either paid out or its not – and a negative provision certainly helps the overall sustainability of a dividend.

Core earnings have been ~$0.70+ per share over the past couple of quarters (excluding the beginning of 2020) while the dividend has been $0.27. Just thinking mathematically, core fundamentals could be cut by more than a fifth (pun intended) from these recessionary levels and the current dividend per share would still be more than sustainable for another year. I am modeling core EPS of ~$0.50 for both 3Q20 and 4Q20, which would be more than enough to sustain the dividend at current levels.

Just to play “what if” on the dividend – it would take a repeat of the first two quarters of economic deterioration in order to deter management from funding the dividend. Thinking about that holistically, it would mean that we the economy would need another wave of national lock-downs which sparked the first economic contractions. Overall, FITB should have no problem sustaining the current level. Any additional income could, and will likely be used for share repurchases after capital levels are rebuilt over the next couple quarters.

When it comes to the larger regional banks, I typically have a bias that their operating results will run very similar to the banking industry average, while the money-center banks like JPMorgan (JPM) or Wells Fargo (WFC) will likely post results noticeably better/worse than the average. That said, when reviewing past operating results and how they might unfold as we navigate through this new economic cycle, FITB is likely to be an average performer in terms of overall credit losses.

The bank currently does have the reserve level, capital base, and future earnings profile to withstand the Fed’s adverse scenario without too much trouble. From a future core earnings expectation, the dividend looks very sustainable.

When thinking about the banking industry in general, investors need to take a step back for a moment. The world economy does appear to be stabilizing, if not rebound in some areas. While 1H20 was very scary for everyone, FITB has proven it can continue to report positive earnings and fund a 5.3% dividend, even while funding a higher than normal provision.