Here are some of the notable achievements of Evolution Mining during this period.

The Cowal Mine in New South Wales is an open-pit mine with a processing capacity of 7.5 million tons per year. Currently, the plant is being upgraded to be able to process 9.8 million tons per year. This is one of the reasons that so much of the “major capital” is going towards the Cowal mine in the image below. The Cowal Mine sees production decreasing in 2021, primarily due to lower-grade reserves, but grade should increase in the second half of 2021 when “Stage H” is completed.

The image below lays out Evolution Mining’s capital plans for fiscal 2021. 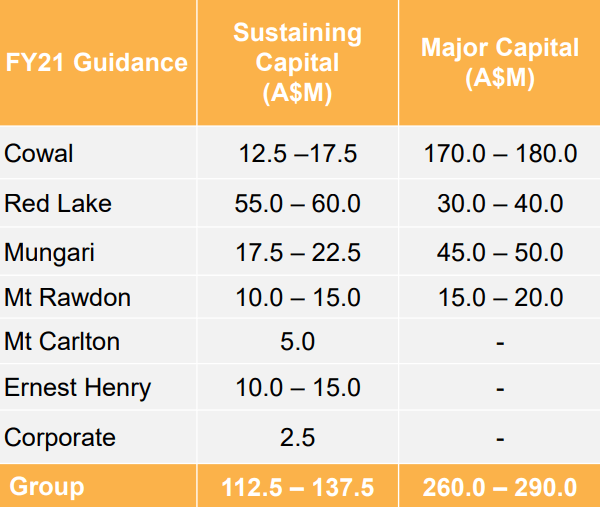 Red Lake Acquisition and Mine History

Evolution’s recent acquisition of Red Lake takes the mine into the next chapter of what was already a storied past. Despite Red Lake’s long history, as seen in the image below, Evolution Mining knows the asset will continue to produce high-grade ore and believes it will be a long-life asset. The company already has large resource estimates for the mine but expects its maiden reserve estimate under Evolution’s watch to come in Q1 of 2021.

Evolution Mining is in the process of implementing a 3-year plan at Red Lake that will increase annual production to more than 200,000 ounces while keeping the AISC under $1,000 per ounce. If these results are achieved, then Evolution’s investment will pay back handsomely. 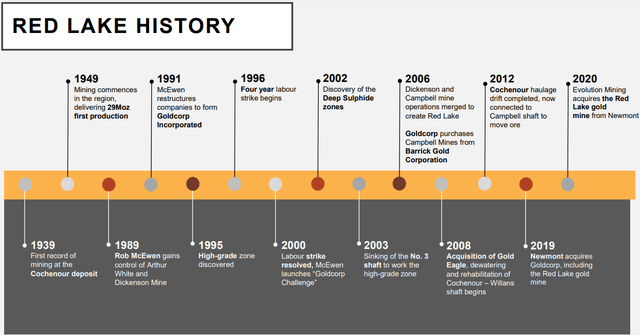 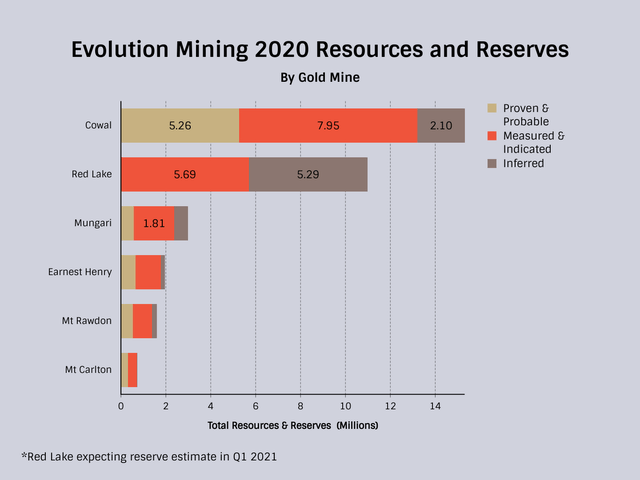 *Resources and reserves are stated in millions

Evolution Mining’s production growth in 2021 is coming from the Red Lake Mine as a result of owning the mine for a full fiscal year. The rest of the various mines’ production is staying relatively steady. Cowal production is dipping but is expected to rebound in the second half of 2021 when higher-grade ore is processed again. 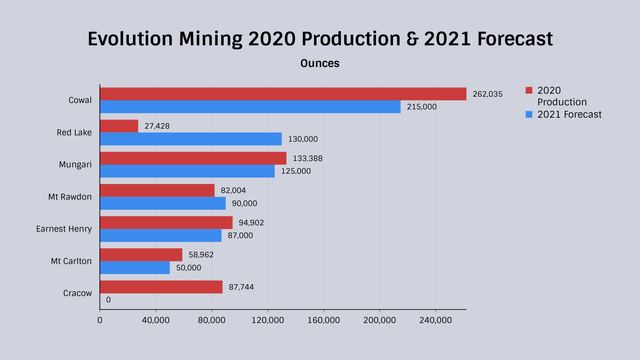 *AISC converted to USD from AUD at .74 exchange rate

*AISC stated on a by-product basis, which explains the Ernest Henry mine having a negative AISC. 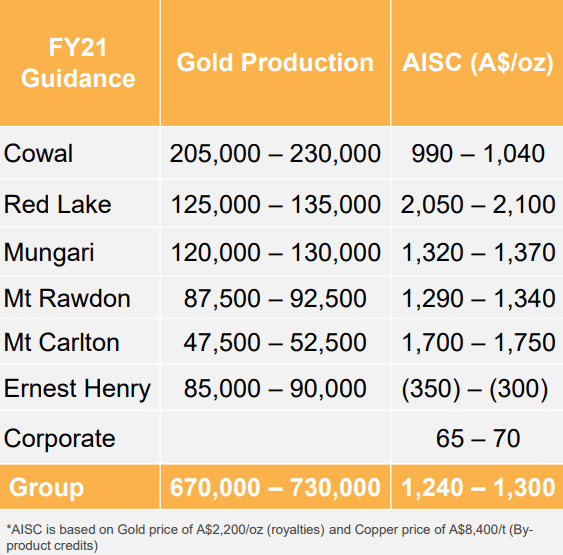 In fiscal 2020, Evolution Mining produced 96 percent of its gold from Australia and 4 percent from Canada. The below table breaks it out by country as well as by state. Evolution Mining has very minimal risk related to jurisdictions. 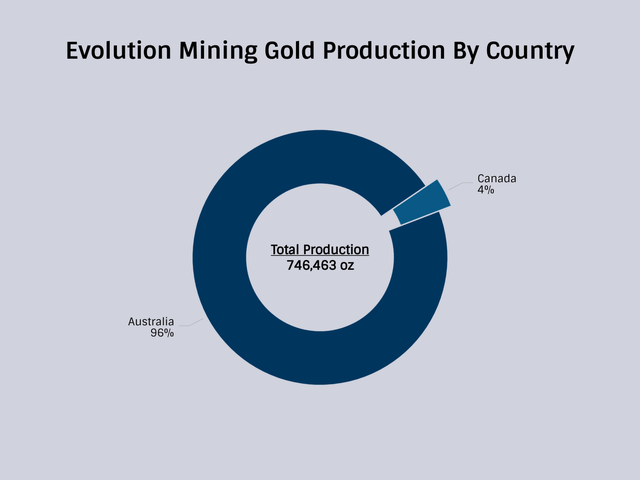 Here are the highlights of the company’s results for the full-year 2020. 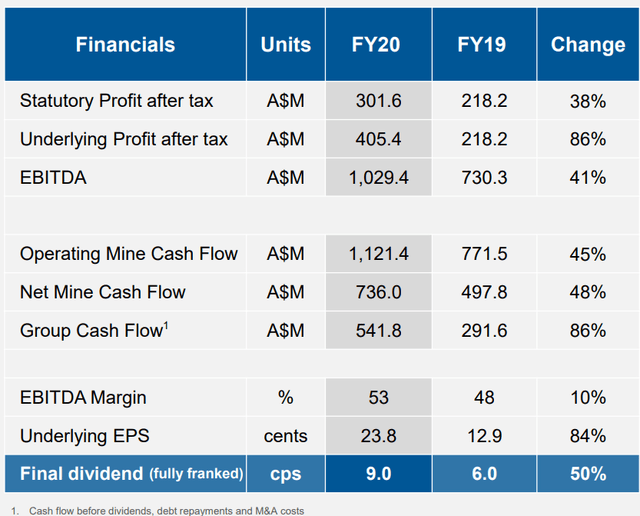 Evolution Mining currently trades with a market cap of $7.05 billion.

Evolution Mining trades at a market cap to proven and probable reserves ratio of $961 per ounce.

Evolution Mining trades at a market cap to gold ounces produced ratio of $9,444 per ounce.

The company began the year with 1.692 million shares in July of 2018 and since then has added roughly 12 million shares. Most of these shares have been created via employee compensation plans, as can be seen in the statement below. 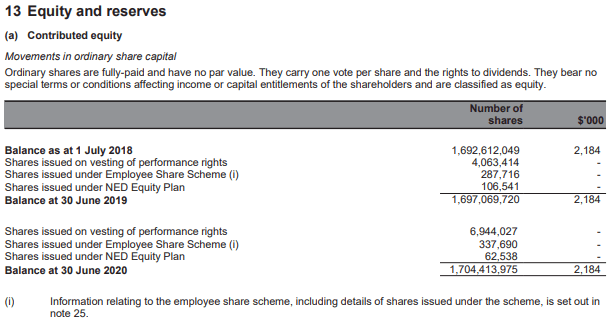 Based on the table below, insiders own about 1 percent of total shares. 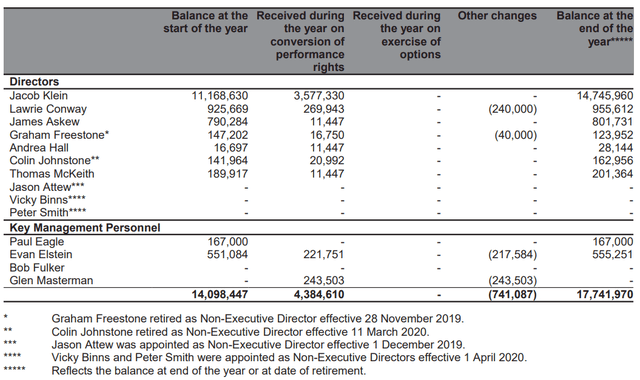 The table below breaks out the executive pay for each individual. This level of compensation is at a reasonable level for the size of the company, and relative to other companies I’ve seen. Also, keep in mind that these values are in Australian dollars.

With the most recent acquisition of the Red Lake Mine, the company obtained a great asset at a very reasonable price. The mine currently produces gold with a relatively high AISC, but Evolution Mining’s bread and butter is optimizing assets to be more efficient and productive. Evolution Mining currently has a 3-year plan to increase Red Lake’s production to more than 200,000 ounces per year with an AISC under $1,000 per ounce. Look for the first reserve estimate from the Red Lake mine sometime after January in 2021. 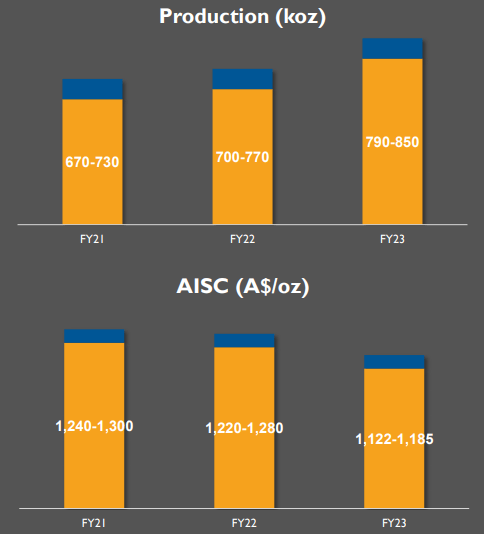 If Evolution Mining can implement the growth plans it has for the next three years, then it should further establish the company and reward shareholders. That said, I am not an owner in Evolution Mining at these prices, although I believe they are an excellent company. To put it in another perspective, I think Evolution Mining is a better buy than Northern Star Resources but not as attractive as Kirkland Lake Gold.

Additional disclosure: The author of this article is not a Registered Investment Advisor or Financial Planner. This writing is for informational purposes only. It does not constitute an offer to sell, a solicitation to buy, or a recommendation regarding any securities transaction. The information contained in this writing should not be construed as financial or investment advice on any subject matter. The author of this article expressly disclaims all liability in respect to actions taken based on any or all of the information on this writing.