Bed Bath & Beyond Is Pricing In Too Much Growth (NASDAQ:BBBY) 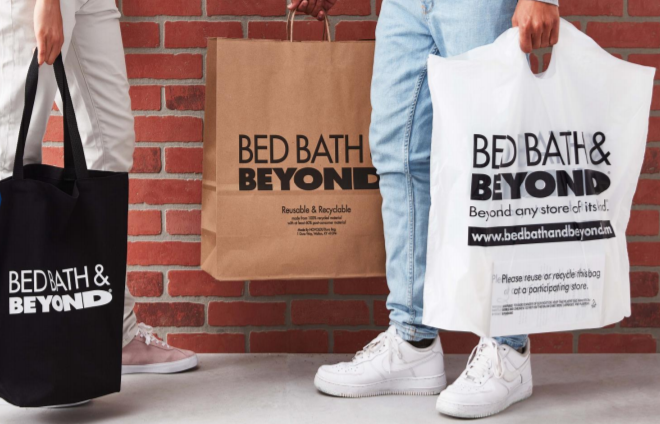 Home goods retailer Bed Bath & Beyond (BBBY) has seen its share price soar during this months-long recovery period in the equity markets. BBBY has struggled for the past few years with generating revenue, high levels of debt, deteriorating margins, and lack of a compelling store experience. All of these things contributed to a much lower share price, but as a turnaround effort is underway, investors appear to be giving the company another chance. 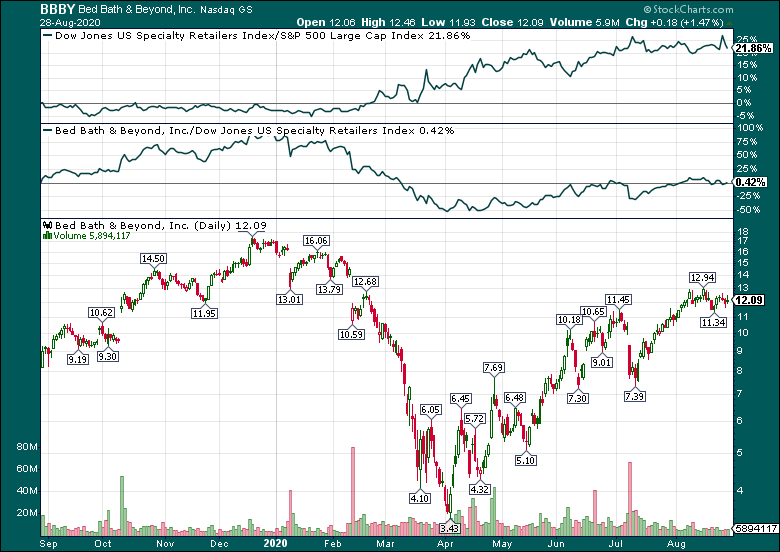 However, even though the stock is up 350% from the bottom set in April, it actually remains quite weak against its peer group over the past year. Specialty retailers, as you can see in the top panel of the above chart, have exploded higher against the broader market since the start of the year. The group is one of the best-performing sectors for 2020, but in the panel directly below that, you can see BBBY hasn’t come close to keeping up.

Before we get to the fundamentals, I’ll note that currently, 60% of BBBY’s float has been shorted. Earnings are expected in late-September, and that could prove to be a catalyst for a huge move up or down. When that much of a stock is shorted, just about anything can happen, so keep positions small and nimble on this one.

Like every other retailer, BBBY was forced to take drastic action in response to the COVID situation. With BBBY’s focus on driving people into stores, COVID was particularly damaging, as digital-first (or digital-only) retailers have thrived in an environment where human interaction is actively discouraged. 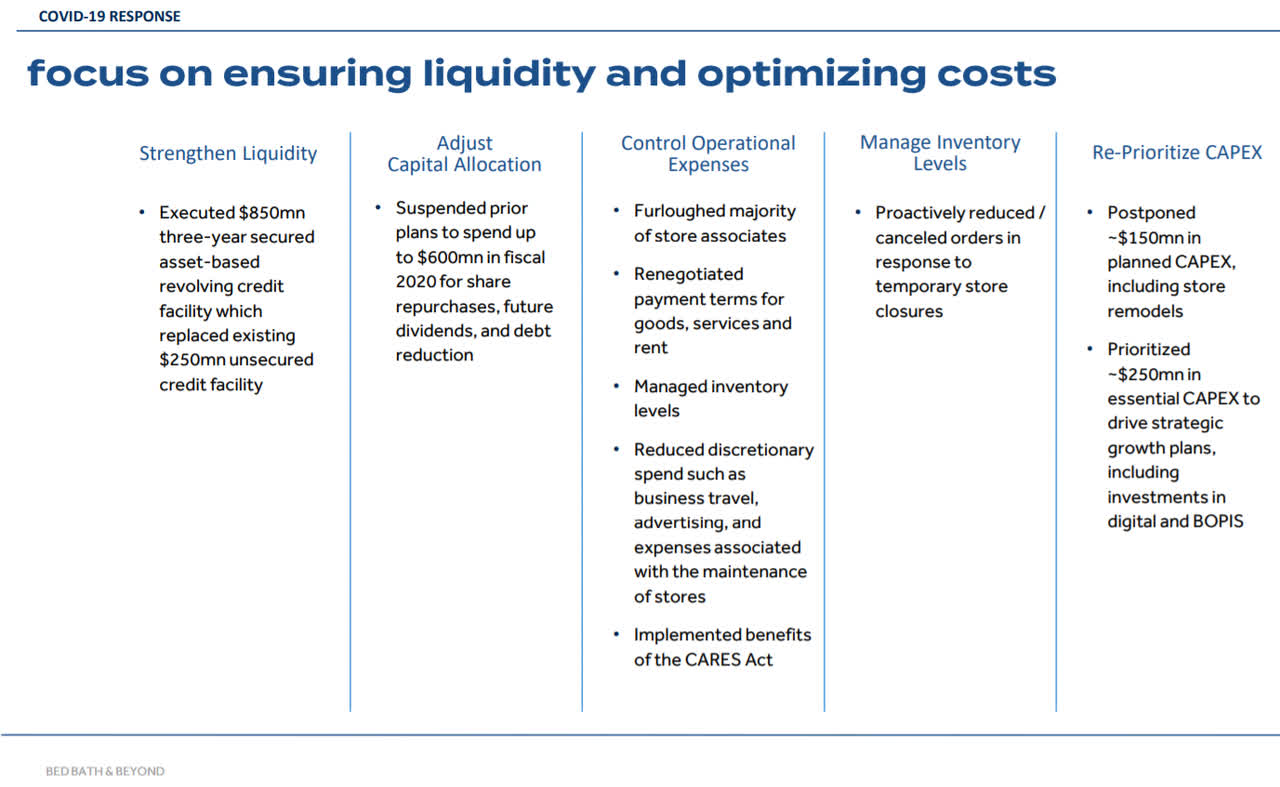 BBBY has done some of the same things other retailers have, with a focus on liquidity, controlling inventory and operating expenses, and deferring previously-planned capex. These are all things that were necessary for BBBY to do, and it has done them in order to ensure it can survive.

The good news is that BBBY has seen the negative impact of its physical store base being closed lessened as the months have worn on. 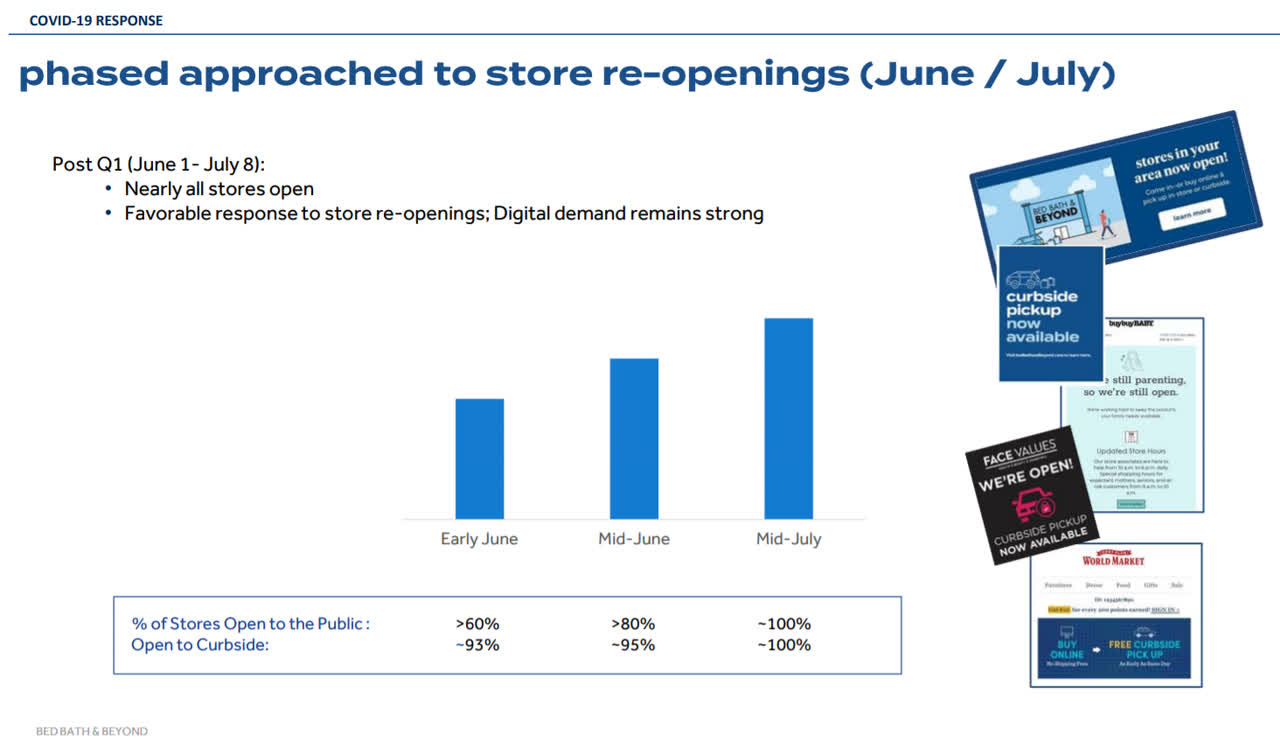 The company opened substantially all of its stores by the middle of July, with what it calls “favorable” response from consumers. We know the home retailing category has been unbelievably hot during the pandemic, so I suspect demand at BBBY’s stores has likely been robust; we’ll find out in late-September with the earnings report. This is a critical step for BBBY to begin recovering, and it has been completed.

BBBY is also continuing to address some of its longstanding issues with margins, and some fairly drastic actions are being taken. 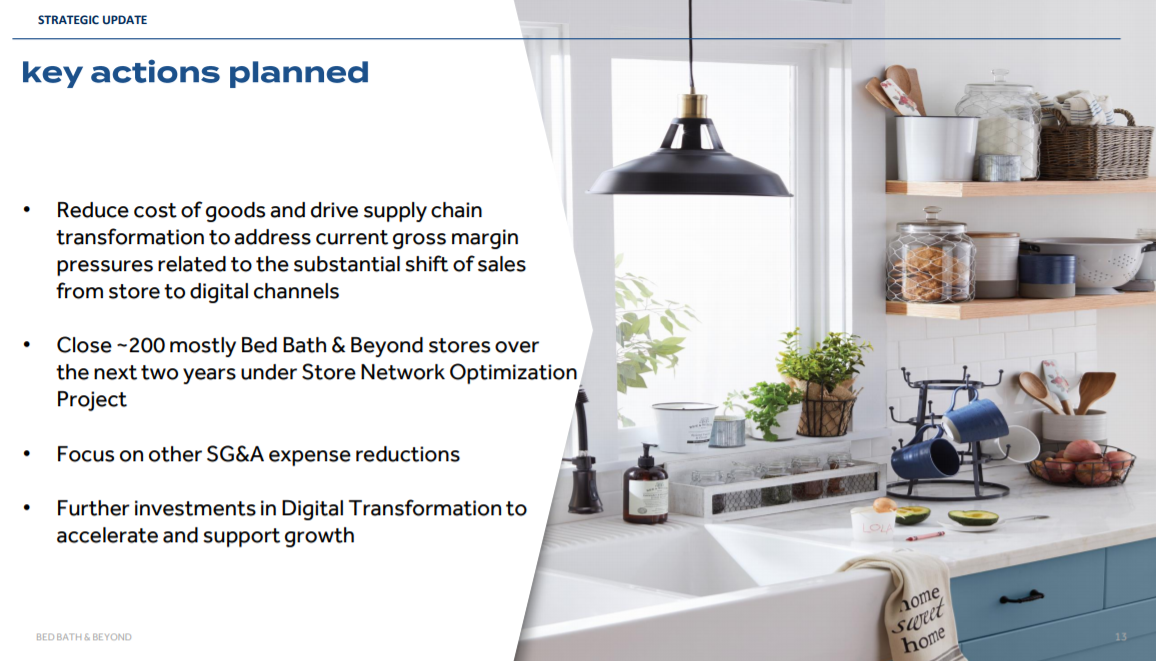 The company is focusing on digital channels, and although it is probably a decade late with this move, it is better late than never. It is also working on right-sizing the store footprint, believing it will close about 200 stores in the next two years. It is also focusing on reducing SG&A costs, which have been a problem for a long time, including a very recently announced 2,800 jobs that are being reduced. I never want to see anyone lose their job, and while this is a very sad event for those impacted, it is also necessary for BBBY to move forward and survive in a digital-first retail environment.

BBBY has experienced flat-to-lower revenue for years. The company’s store base hasn’t grown for a long time, and weak comparable sales have driven sales somewhat lower in recent years. BBBY’s very slow transition away from a legacy big box retailer into one with inviting stores and robust digital capabilities is reflected in the below.

This year’s revenue will obviously be very weak, but there is a rebound expected for fiscal 2022, although not necessarily that close to pre-crisis levels. Keep in mind BBBY is closing 200 stores in the next couple of years, so while comparable sales should improve, overall revenue will be lower. That’s okay so long as margins improve, which should send earnings higher. But don’t be surprised if BBBY never returns back to $12 billion in revenue.

Speaking of earnings, the outlook is decidedly less rosy on that front.

Earnings have moved sharply lower for four consecutive years, and will do so again this year. Next year, a small loss is still expected, but would represent an enormous improvement over this year. With revenue slated to rebound despite store closures, a sizable amount of SG&A reduction, supply chain improvement initiatives, and other margin-improvement initiatives with inventory and product mix, I don’t doubt that BBBY can see something much closer to breaking even in fiscal 2022.

But what happens after that? Even during its best days, which were a decade ago at this point, BBBY traded with a PE multiple in the area of 14 or so. More recently, PE multiples have declined significantly into the area of 9 times earnings. Using these as a guidepost, we can infer the level of earnings the stock is pricing in since there aren’t any earnings today.

At $12.09, a PE multiple of 9 would imply $1.34 in EPS, while a PE of 14 would imply EPS of $0.86. I can’t imagine BBBY, with its hugely checkered past on earnings and uncertain outlook, would command anything like 14 times earnings, but it gives us an upper bound to look at. I suspect the stock will be valued at something under 10 times earnings, implying at least $1.20 in EPS at the current share price.

Given that sort of assumption of EPS, I have a very difficult time justifying the current valuation. It could be years before BBBY gets close to $1.20 in EPS with revenue moving lower, as it has to given the store closures. The company’s digital initiatives have come a long way, but are late to the party and will take time to work. Margin improvements should be on the horizon, but pricing in $1.20+ in EPS today seems very risky to me and as such, I’m leaning bearish on this one.

I’ll reiterate that a stock with 60% of its float shorted can move up in a hurry, but fundamentally, BBBY has been one of the weakest stocks in its group, and I expect that to continue.