Apple’s Increasing Shift Toward Subscriptions Could Lead To The Stock Doubling Again (NASDAQ:AAPL)

As I have already mentioned in my article “Torn Between Overextended Valuation And Stunning Results“, Apple reported stunning quarterly results with growth in each geographic region, product segment and financial metric. In the long term, the company has very solid fundamentals and should continue to expand its business.

Nevertheless, there is also a slow but sure shift in the company’s sales strategy. We know this sales strategy in particular from Software-as-a-Service companies called subscriptions.

While most people argue that Apple offers its services to generate more hardware sales, I think the opposite is true. Apple is increasingly offering its hardware on a subscription basis and reportedly plans to launch new product bundles in order to convey the perception that it is becoming a subscription-based company and therefore deserves a higher valuation.

In this article, I will show you why I think this way. Additionally, I will discuss the implications of such a strategy concerning potential opportunities and risks. 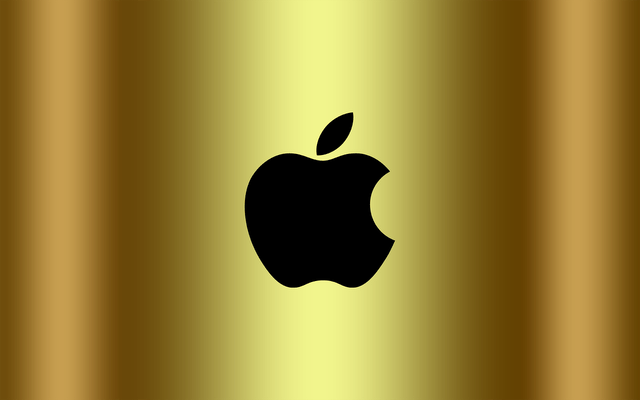 2. Apple’s shift towards a subscription-based company

As you can see in the following graph, service revenues in FY 2019 accounted for 18% of Apple’s total revenues with rising tendency.

Furthermore, hardware sales of iPhones, iPads and Macs have been more or less stagnating for years, while sales of wearables and services have shown very high growth rates.

Additionally, the following illustration visualizes the rapid surge in Apple’s services revenues over the past few years. 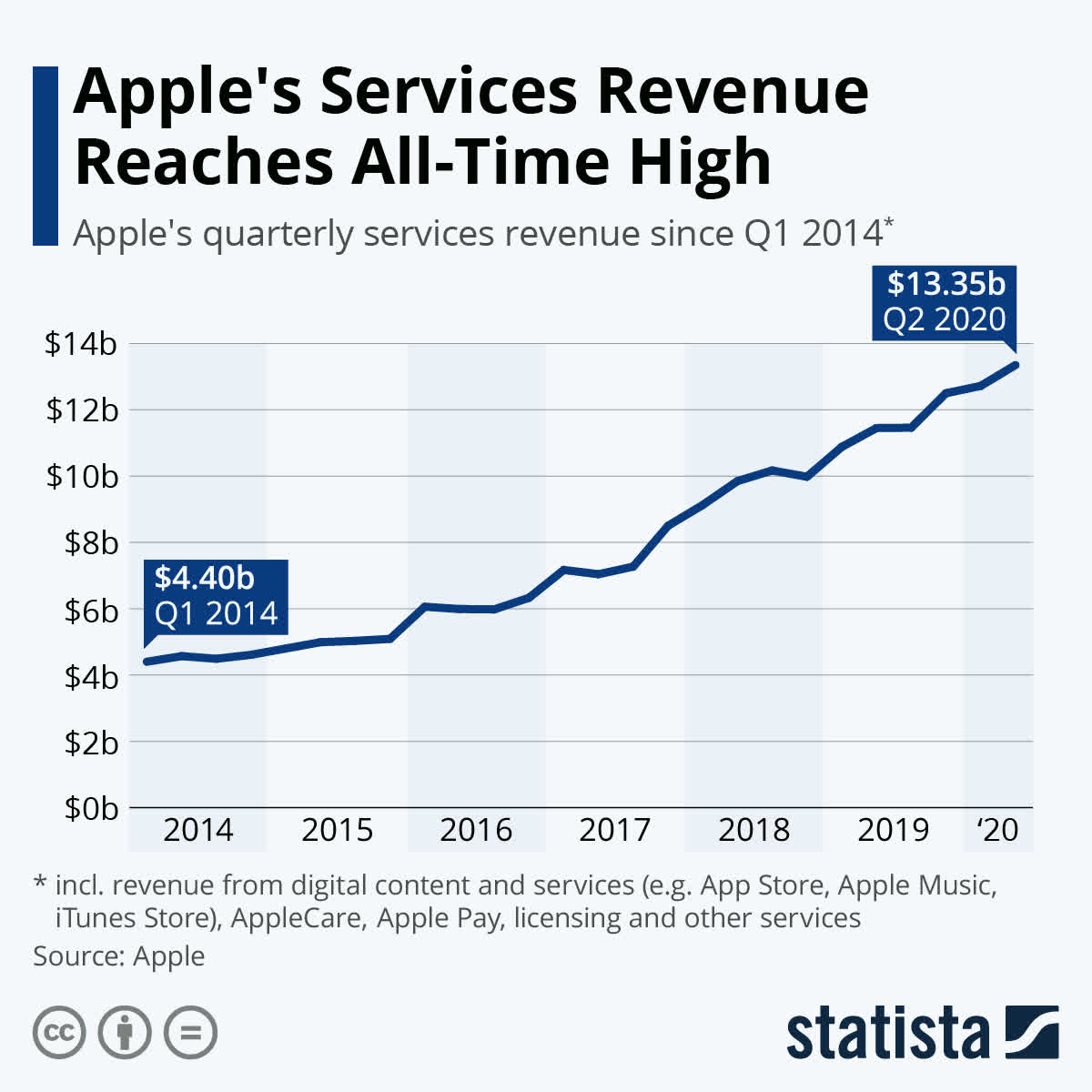 Now comes the interesting part. While Apple’s revenues in FY 2019 consisted of 82% of hardware sales, the gross margin percentage of services is with 64% much higher than hardware sales.

So, what would you do if you would have a rapidly growing service with an increasing customer base and much higher gross profits compared to your former product categories? Right, you would search for ways to upsell your services by, at the same time, increasing the turnover rate and subsidizing your existing product categories. So, how is Apple’s approach in this context?

First, Apple offers interest-free financing for its products. At the same time, the company makes it possible to trade-in older product models to make the purchase price of a new product more affordable; even for people with low budgets. Trade-in is becoming a more common trend, as according to CEO Tim Cook during the earnings call. That gives the customer the feeling that the products are more affordable and, as with a normal subscription model, pays for them in monthly installments.

Second, Apple is rumored to be getting ready to launch new bundles of its different subscription services, according to Bloomberg. The bundled services offerings, rumored to be called “Apple One,” will offer Apple services consisting of Apple Music, Apple Arcade, Apple TV+, Apple News+ and iCloud. The bundled subscription is said to be cheaper for customers than buying each service individually.

I could even imagine that in future Apple could offer its hardware in combination with its services in a package for a monthly fee with the possibility to renew these products every year or every two years. The more hardware the customers buy, the higher monthly installments they have to pay.

Third, Bloomberg reported that Apple acquired Mobeewave. Mobeewave is a startup with technology that could transform Apple’s iPhones and other hardware into payment terminals. By incorporating Mobeewave’s technology into its hardware, Apple would be able to offer fast and easy payments with no other apps needed.

Apple’s own Apple Pay technology in combination with Mobeewave’s technology could be a way for Apple to bypass conventional payment and banking infrastructure by offering customers their own payment processing.

The advantage for Apple could be the elimination or reduction of transaction costs to banks or third parties as well as a better understanding of consumer (payment) behavior, and on that basis, providing consumers with new services and product offerings.

The advantages for consumers could be a fast and easy in-store processing of trade-in and subscriptions for Apple’s coming bundled hardware and services offerings.

Even merchants could potentially benefit from lower transaction costs through the use of Apple’s payment technology, depending on Apple’s ultimate goal with implementing Mobeewave’s technology. 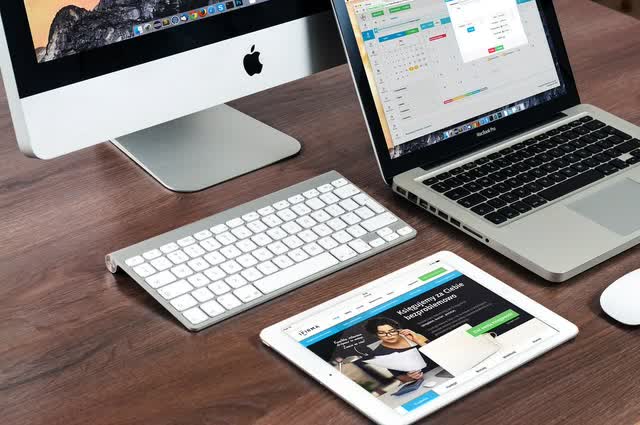 3. Potential implications of the expansion of subscription-based hardware sales

First, the increasing sale of hardware on a subscription basis could result in stagnating or declining overall sales in the short to medium term, which could be partially offset by increasing wearables sales and services revenues. Consequently, with this change in business model, Apple could sacrifice short-term revenue for long-term subscription income.

In this context, Adobe (ADBE) can be used as an example. After the company announced the “subscription only” business model in 2013, revenues and profits fell for two years, but increased rapidly thereafter (see following figure).

(Adobe revenues and profits after switching to “subscription only”. Source: Morningstar) 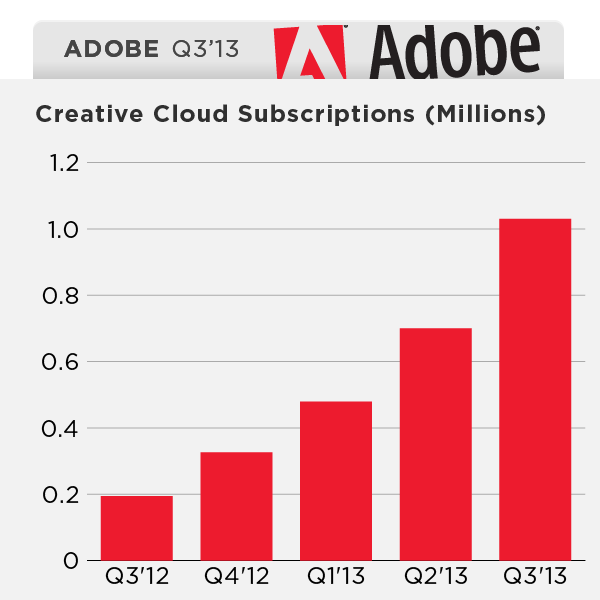 Second, as can be seen in the following figure, Apple’s operating income and cash flows were stagnating during the last few years. 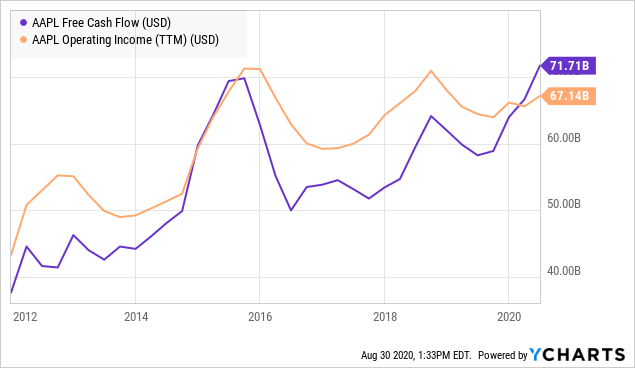 Nevertheless, Apple’s market cap more than tripled over the same time period which cannot only be explained by Apple’s massive volume of stock buybacks and announcement of a stock split (see following figure). 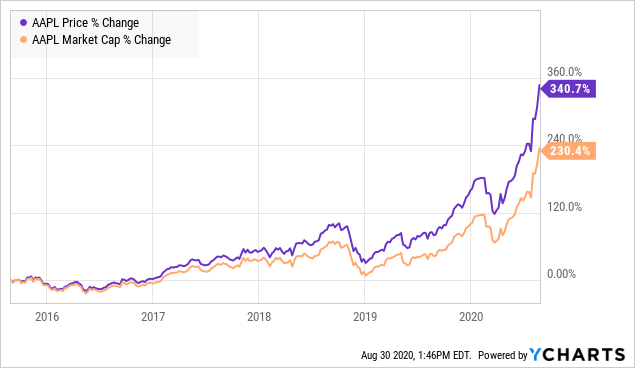 While the shift in Apple’s business model could lead to stagnating or declining overall revenues as well as stagnating operating income and cash flows in the short to medium term, investors seem to anticipate increasing operational performance in the future.

Third, Apple’s shift towards a subscription-based business model will make revenues and cash flows more reliable and stable. This could also be the case during economic downturns.

Fourth, Apple could see disproportionately high growth in its hardware and services revenues due to new technologies such as 5G and AR/VR if the company launches complementary offerings. These include the upcoming 5G-capable iPhone. In addition, there are frequent rumors of AR/VR glasses being developed. A hardware bundle consisting of these products could become a real blockbuster.

On the other hand, Apple could suffer disproportionately if the company offers its own financial services and thus bears the risk of default of its customers by bypassing banks and financial institutions in order to save (transaction) costs.

4. Apple’s current valuation seems to be extended but the stock could move higher with the current momentum

In my last article about Apple I presented my fair value calculation on a very detailed basis, which is $338-366 depending on the calculation method. Based on the closing price of $499 on Friday, this represents a current downside potential of 27-32%.

Nevertheless, I wouldn’t be surprised if Apple is going to have a double-digit P/S ratio of up to 16 with the current market momentum, which is the current P/S ratio of most SaaS companies. This would mean that the stock would double again. On the other hand, the company’s overall growth is far too low to justify such a valuation.

A very big risk, which the market seems to ignore absolutely at the moment, is the Apple App Store practices and revenue cut amounting to 30%. My personal fear is that Apple has too much market dominance here and is abusing its market dominance too much, so Apple could be forced to make concessions in this regard.

With Facebook (NASDAQ:FB), Spotify (NYSE:SPOT) and Epic Games, more and more companies are coming together to criticize Apple’s practices. A corresponding court decision could put massive pressure on the stock.

Investors should therefore keep an eye on two metrics in particular, which might help to assess Apple’s operational performance. These are the active installed base for hardware (iPhones, iPads, Macs) and the development of services revenues.

According to the management’s statements during the earnings call for Q3 2020 results, the active installed base for iPhones, iMacs and iPads reached a new all-time high. Additionally, the company set a new June quarter record in terms of services revenue.

As presented in this article, Apple is increasingly moving towards a subscription-based business model for both its hardware and services.

In this context, trade-in and interest-free monthly payments in the form of a subscription model play an important role. This policy shift could lead to product bundles consisting of various packages of hardware and services with different price ranges.

The advantage for Apple is that the company has the opportunity to keep consumers in its own ecosystem and upsell various products and services.

The advantage for consumers is that the purchase price for new products would be more affordable; even for people with low budgets.

Investors should attach increasing importance to this policy shift when evaluating Apple and no longer simply treat Apple as a conventional hardware company and based on previous valuation models.

While the shift towards a subscription-based business model can put pressure on the company’s operational performance in the short to medium term, this approach can lead to steady and sustainable growth in the long term.

Based on my valuation model, Apple’s current fair value is between $338-366 depending on the calculation method, which would correspond to a downside potential of 27-32%.

Nevertheless, with the current market momentum, I wouldn’t be surprised if Apple is going to have a double-digit P/S ratio of up to 16, in line with the most SaaS companies.

Other potential upside catalysts could be the upcoming holiday season, the release of the 5G-capable iPhone, the release of AR/VR glasses and the offering of additional product bundles.

Downside risks exist in particular due to the increasing criticism of Apple’s app store practices and the 30% revenue cut, which is being joined by more and more companies. I fear that a corresponding court order could put enormous pressure on Apple’s share price in the short term.

PS: If you liked my article and you want me to write more articles of this kind in the future, then like, comment and share this article. I intend to publish more about tech stocks in future. If you are interested in finding out my favorite technology stocks, just follow me on Seeking Alpha. Thank you for reading!

Disclosure: I am/we are long AAPL, ADBE. I wrote this article myself, and it expresses my own opinions. I am not receiving compensation for it (other than from Seeking Alpha). I have no business relationship with any company whose stock is mentioned in this article.