On its face, it’s been a pretty good month for alternative investments (“alts”). Not as good as the preceding month, though. In fact, the weighted average return for the 14 alt ETFs we follow was just 0.35% over the four-week period ending Aug. 26. The meager return was largely due to fibrillation in the price of gold. The SPDR Gold Shares Trust (NYSE Arca: GLD) was under water, albeit modestly, for the month, but GLD accounts for more than half of the assets in our alt universe.

The broad stock market—the investment on the opposite side of the alt argument—was tough to beat in the past month as it continued its climb to record highs. Only one alt ETF had a better month than the SPDR S&P 500 Trust (NYSE Arca: SPY): recurrent outperformer SPDR Bloomberg Barclays Convertible Securities ETF (NYSE Arca: CWB). CWB bettered the SPY return by nearly a full percentage point. 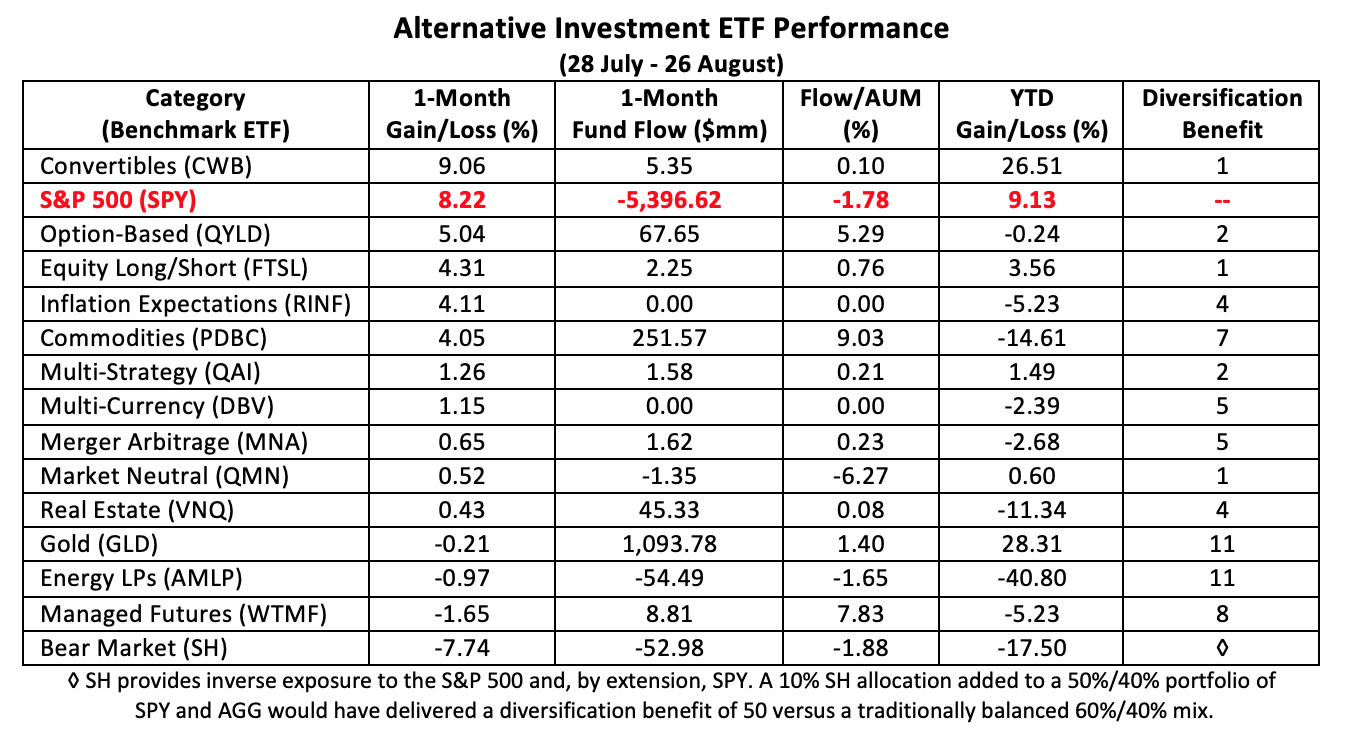 CWB is notable, too, for its year-to-date gains. At nearly 27%, the portfolio’s return only slightly lags behind that of this year’s alt darling, the GLD gold fund. GLD and CWB are the only two alt ETFs to outdo SPY for the year. CWB, however, does it with a 2.42 percent annual dividend yield. SPY’s dividend is 1.71% and GLD, well GLD doesn’t pay a dividend. CWB’s compound total return over the past 12 months is 37.39 percent. GLD’s is just 24.86%.

There is the diversification thing, though. Gold offers considerably more portfolio risk diversification than convertible securities. GLD’s diversification ratio is 10 basis points higher than CWB’s, meaning there’s more yin to a balanced portfolio’s yang obtained through a gold investment than there would be from the ownership of a preferred share and convertible bond mix. That’s something to keep in mind when pondering the potential fallout from a stock pullback.

If we look beyond returns to gauge investor sentiment, gold and convertibles were of only moderate interest to new investors over the past month. Fund flow measures the net gain or loss in an ETF’s assets separate and apart from market movement. The ratio of that flow to assets under management gives us an indication of just how significant the monthly movement is.

RINF, essentially a long/short portfolio, has traced a dramatic upward trajectory since mid-March. The fund offers long exposure to Treasury Inflation-Protected Securities (TIPS) together with a short allocation to conventional Treasury paper, so its share price appreciation corresponds with a contemporaneous spike in the 10-year breakeven inflation (BEI) rate. The yield spread between TIPS and vanilla government securities widens when inflationary expectations heighten. 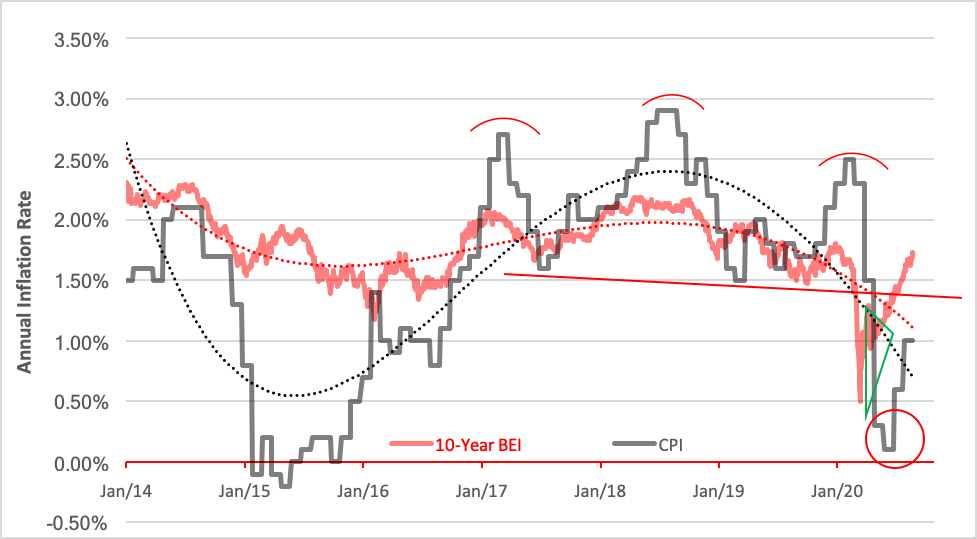 RINF is likely to appear in the top half of future monthly tables thanks to Fed Chair Jay Powell who last week announced a significant shift in central bank policy.  Going forward, the Fed will countenance, and may actually encourage, inflation in the interest of fostering job growth. The short and sweet of it? The Fed’s less likely to raise interest rates, even if inflation exceeds its target.

From the looks of it, the market seems to have anticipated this policy. The question investors and advisors must address now is whether their portfolios are diversified enough to withstand its further effect.

Brad Zigler is WealthManagement’s Alternative Investments Editor. Previously, he was the head of Marketing, Research and Education for the Pacific Exchange’s (now NYSE Arca) option market and the iShares complex of exchange traded funds.