The Most Expensive City For Remote Workers Revealed

London has been revealed as being the most expensive city for remote workers, costing more than £23,755 in essential expenses.

This year has been nothing short of crazy. The way many businesses around the world are working has completely flipped on its head with the need for an office reducing every month. The COVID-19 pandemic has forced employees across the globe to set up an office in their homes for the foreseeable future. It’s fair to say that the need for an office space is reducing and instead the daily costs of having a company office are being needed to help support staff setups at home.

It is often reported that one of Berkshire Hathway’s first subsidiaries was See’s Candies. This is not the case. See’s was one of the first businesses Warren Buffett and his right-hand man, Charlie Munger, acquired, but it was not through Berkshire. Berkshire’s oldest operating subsidiary is National Indemnity Company, an insurance company based in Omaha, Read More

A study by Capital on Tap reveals the best and worst cities for saving money whilst remote working. The study analyses the cost of living including rent, bills, wifi and food versus the average salary to uncover where remote workers are the most well-off and where they struggle the most.

London Is The Most Expensive City For Remote Working Happiness

With London being one of the most popular cities in the world for both its attractiveness of living as well as career opportunities, are the high costs really worth being in the capital for?

The study showed that London is the most expensive city for remote workers with the cost of working from home topping £23,755 per employee per year. One of the main factors for this high cost is due to the average rental prices. At £17,796, a large amount of the average £33,914 yearly salary is spent on the cost of living. Therefore, remote workers are left with just £10,159 for their non-essential purchases and every day living.

Two very popular cities that are always expensive for remote workers are Hong Kong, Singapore and Geneva. Whilst Hong Kong and Singapore in particular are well known for their employment capabilities, it certainly comes at a cost. Living costs reach just above £19,573 a year and with high tax brackets meaning less disposable income, the countries rank second, third and fourth respectively. 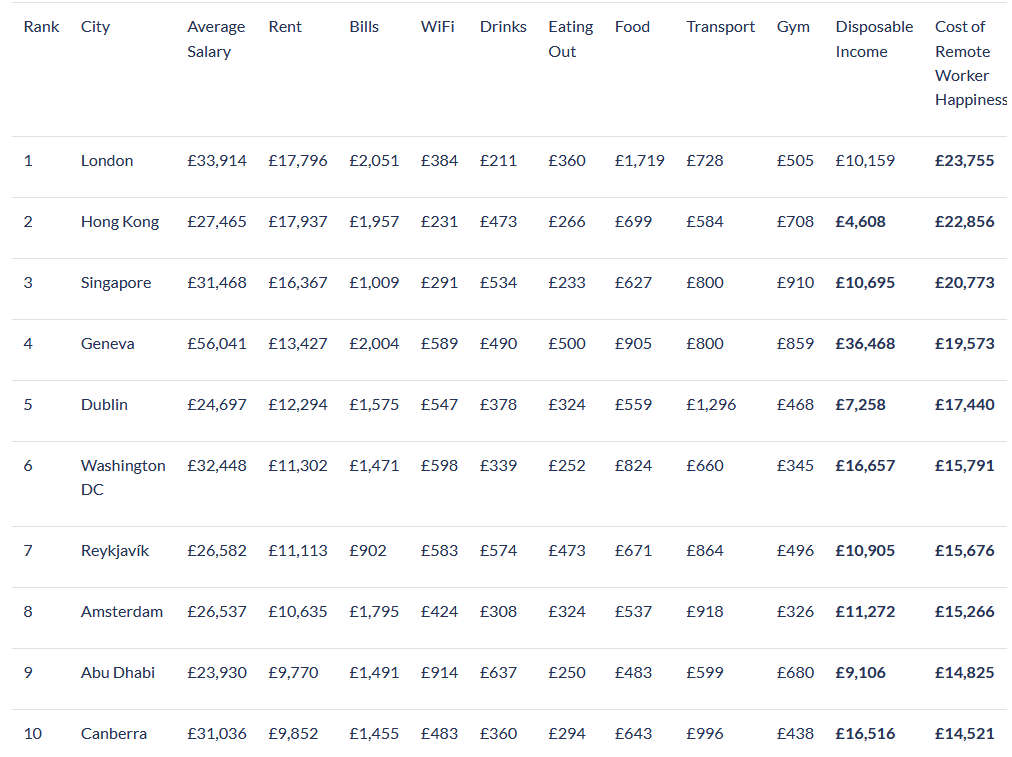 With a very attractive average salary of £56,041, Geneva is a city that will attract many. However, because of this high average salary the cost of living is representative. At a total of £19,573 a year, the cost of an employee per year makes Geneva a difficult city to have remote workers in. With rent standing at £13,427 a year, it’s one of the highest priced from the study. Despite this, the city’s average pay bracket allows for a big disposable income for employees to enjoy their work life balance.

Copenhagen, Washington and Canberra follow after Geneva as the top locations for remote working disposable income. These cities all offer extremely high saving opportunities with disposable incomes reaching £19,000 a year! 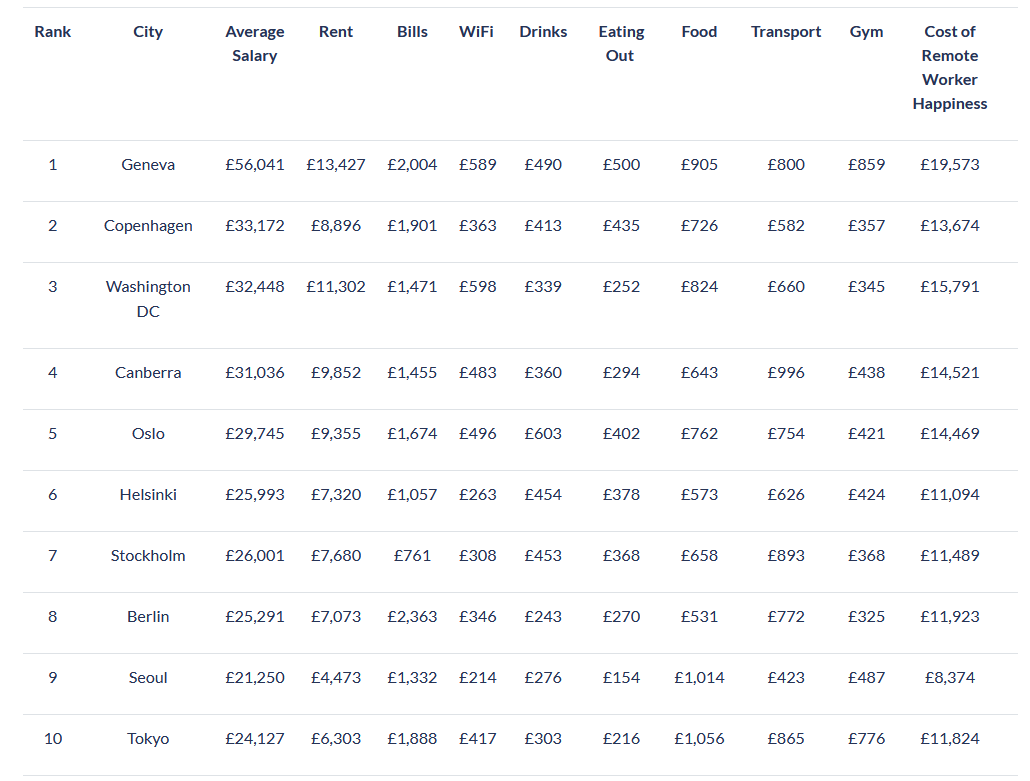 For employers who are on a tight budget, New Delhi ranks as being the cheapest city for remote worker happiness. With the cost of an employee being just £2,349 per year, the city offers a vast opportunity for remote workers to continue for many years to come. A one-bedroom flat in the city costs £1,223 per year with bills, WiFi and groceries totalling £654.

Following on from New Delhi, Cairo, Colombo and Buenos Aires are the next cheapest options for remote working employers with all three costing less than £3,500 per year in living costs. If employers are seeking to improve their employees health and well being, fitness club memberships cost approximately £117 per year, not to mention having this alongside the beautiful Brazillian weather! 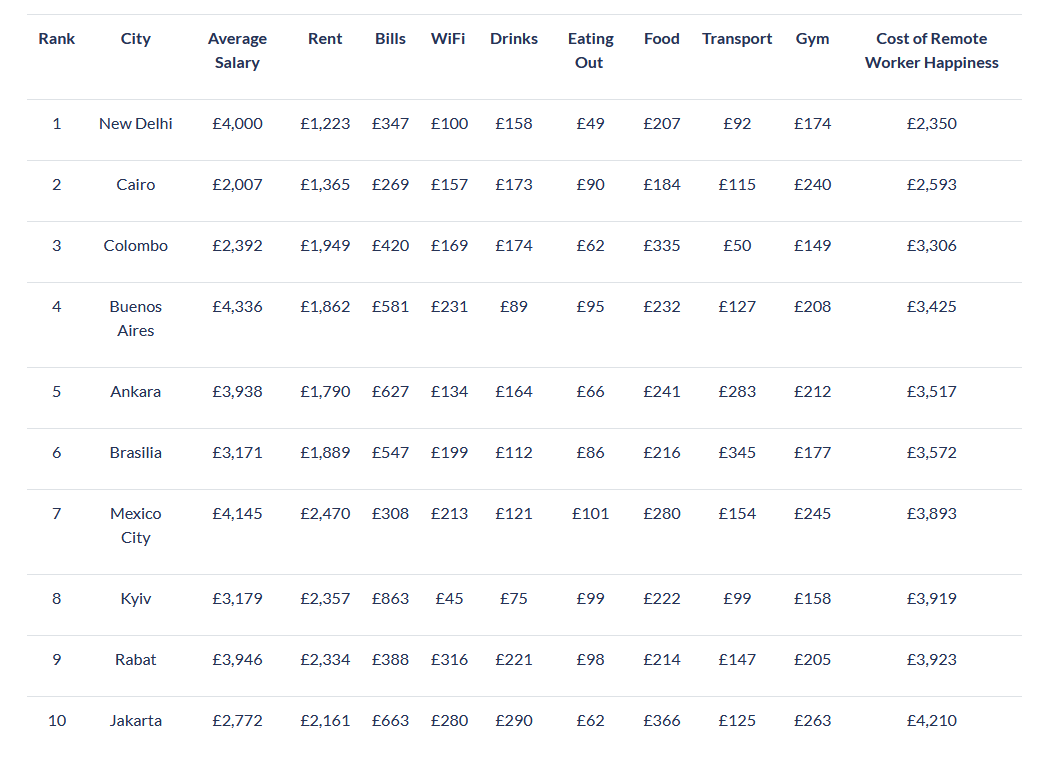 Do My 3&1 Exercise to Finish the Year STRONG