Apple’s Market Valuation: Not the Apple of My Eye

While this article is specific to Apple, we could have written a similar piece on Facebook, Amazon, or several other leading tech names whose valuations, based on our analysis, have lifted to levels we believe are unsustainably high in the short run. Because the market indexes are so highly concentrated in these companies, we are concerned about the valuation implications for the overall markets.

Apple has become the most recognized brand in the world and now represents over 7% of the S&P 500, the largest percentage by any single company in S&P 500 history. Much of the recent stock market rally has been led by the 5 most valuable U.S. companies—Apple, Microsoft, Amazon, Facebook, and Alphabet—which now represent a staggering 24% of the overall S&P 500. The run-up in Apple and the other tech companies leaves the market vulnerable to an outsized correction and/or major rotation.

Chris Hohn donates millions of dollars every year through his Children’s Investment Fund Foundation. We can get some clues about his favorite hedge funds by looking at the foundation’s 990-PF filing. The 990 for 2019 isn’t out yet, but the filing for the period ending in December 2018 is. Q2 2020 hedge fund letters, conferences Read More

The company’s track record of innovation and financial results are remarkable. Tim Cook, faced with seemingly impossible shoes to fill, has successfully introduced new products and grown ‘Apple Services’ into a behemoth. We hold Apple in as high regard as any company and have been periodic owners over the last several years.

However, at a price just above $500, an all-time high, Apple’s market valuation looks rather rich. Summarized in Table 1, Apple’s multiples are well above its 5- and 10-year averages. Its P/E multiple is 1.5 times that of the now overvalued S&P 500 index, versus a multiple that averaged the same as the market’s over the last 10 years.

Some argue that the ultra-low interest rate environment supports higher valuation multiples. However, the historical relationship between the risk-free rate and valuation multiples is not linear (see our previous article Accounting for Interest Rates). After all, low interest rate environments tend to be accompanied by subdued—or even negative—economic growth, like we are experiencing now.

Adherents to the argument that higher multiples are justified by low interest rates are ignoring the lofty growth expectations embedded in Apple’s current valuation. We use today’s low rates when we solve for Apple’s embedded growth expectations and still find the implied growth rate is the highest since the introduction of the iPhone. Chart 1 illustrates the implied growth calculation where we reverse engineering Apple’s market valuation by flipping the typical discounted cash flow valuation equation on its head, using historical share prices, a cost of equity based on trailing 3-year beta, and the 10-year Treasury yield for the risk-free rate. 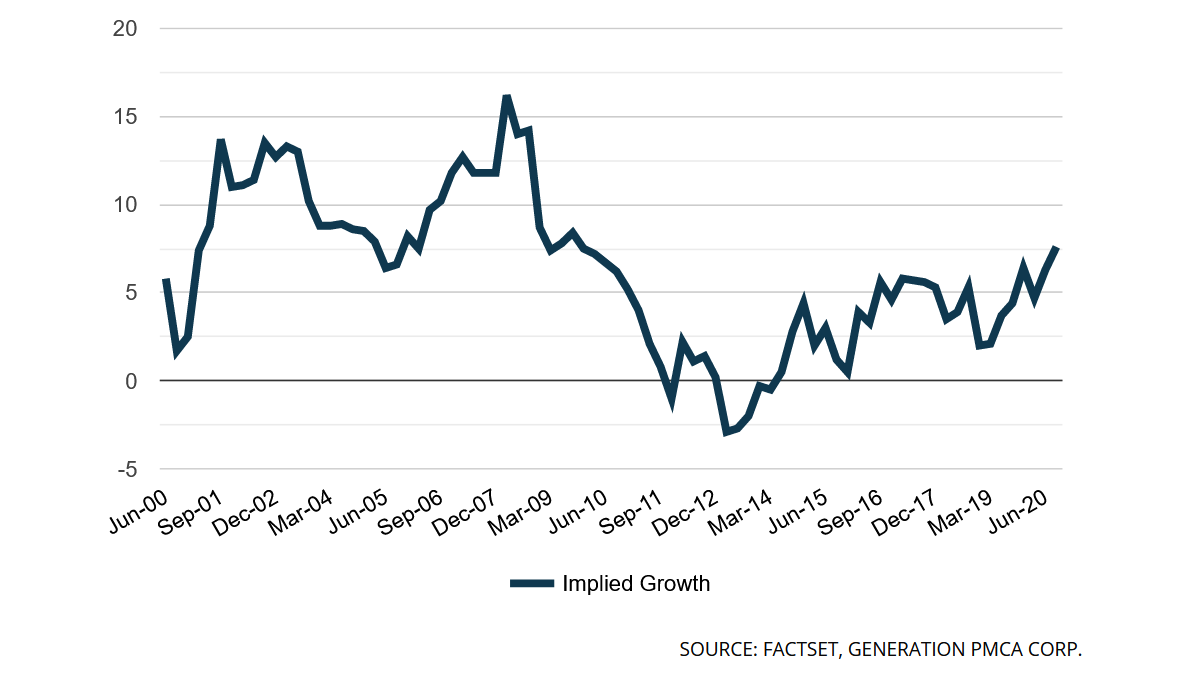 A Comparison Of Apple With The S&P 500

At almost 8%, investors’ long-term growth expectations appear way too optimistic, especially for this juggernaut. For perspective, over the last 20 years S&P 500 earnings per share and sales per share have annualized at 5.4% and 4.5%, respectively. Many of the current S&P 500 constituents were mid-caps 20 years ago that experienced tremendous growth to become the world’s biggest businesses today. If we rewind time and narrow current constituents to the top 10% by market cap, the average annualized revenue growth rate drops to just 3.8%. While it’s possible that Apple, which already sports a market cap in excess of $2 trillion and annual revenues above $270 billion, will grow at more than double the trailing 20-year growth rate achieved by the world’s largest companies, the real issue for investors is that an investment in Apple today is banking on it.

Apple’s weighting in the S&P 500 has surged to 7.2%, well above IBM’s previous 35-year record as the index’s largest position. Since 1980 only 4 other companies have led the S&P 500 in market cap—IBM, GE, Exxon, and Microsoft. GE and Exxon (as of August 31) are no longer even Dow 30 components. IBM is lower than it was 20 years ago. And one would have had to purchase GE shares prior to 1993 and Exxon before 2003 to show profits today. We Canadians are particularly sensitive to the largest in the land falling from its pedestal—Nortel, Research-in-Motion (now BlackBerry), Potash, and let’s not forget Valeant. Clearly past success does to guarantee future success.

Even though everyone seems to already have multiple devices, demand for iPhones, Macs, apps, and Apple’s cloud and related services could remain robust for an extended period. Maybe we’re underestimating the impact of 5G? What if Apple’s autonomous driving initiatives really pay off or the company originates the next big computing platform?

Still, even the most optimistic investor should consider the extreme volatility of market expectations exhibited in the above chart. During Apple’s extraordinary ascent, market expectations have fluctuated wildly, ranging from 16% to -2.5%. With the stock priced for beyond perfection, a bad quarter, product flaws, production issues, a cyber-incident, or competitive disruption could lead to a large correction. Investors should wait for doubts about Tim Cook’s leadership skills or questions about Apple’s ability to innovate to washout growth expectations. We’ve seen it before and we’ll no doubt see it again.

Despite Apple’s lofty valuation, it would not be a candidate for short-sale in our view. We believe short sale candidates should be companies with near-term downside catalysts, poor earnings quality, or other problems. And valuations could extend even further, like they did during the tech bubble. Though the magnetic pull in overvalued stocks should be down toward FMV, they can certainly go higher first.

Regardless, the valuations and index weightings of Apple and other richly valued Info Tech and Communications stocks have potential negative implications for the overall market. Thanks to these companies, the median implied growth of the S&P 500 constituents is 6%, a 20-year high—higher than in the dot-com bubble.

Many of us in the U.S. were forced to celebrate Thanksgiving from afar this year,

How to Beat Decision Fatigue: The Ultimate Guide

This is a guest post by Stephen Roe. Stephen no longer falls asleep on the