One of the most common questions I get from advertisers is regarding the number of conversions that Facebook reports. They feel that the number is either inflated or underreported.

In some cases, there’s something technically wrong that is creating the disparity. In others, there’s nothing wrong at all, but there’s a misunderstanding regarding how the reports should be interpreted.

1. The Base Pixel Isn’t Installed Properly

The first thing you should check is whether the base Facebook pixel code is installed properly on every page of your website between the head tags.

Have you installed it at all? If not, read this post about ways that you can get the base Facebook pixel code added to your website. 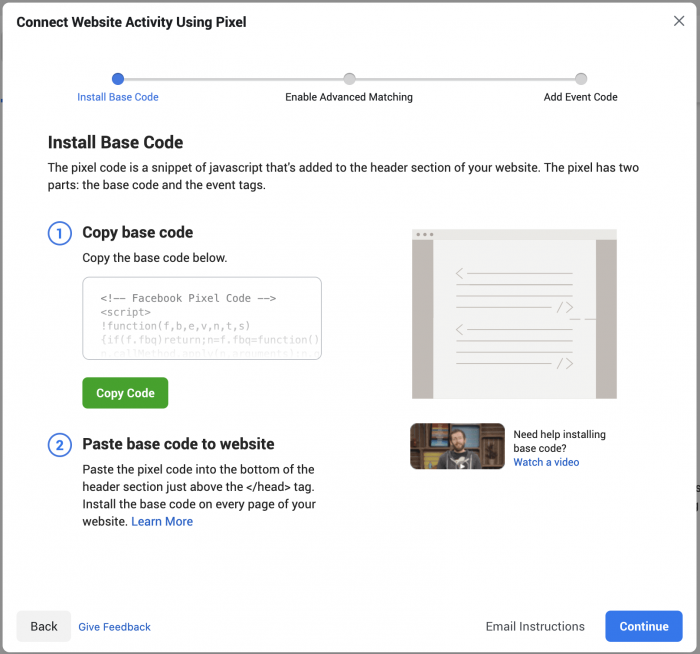 It’s possible that your pixel is installed, but not properly. Maybe you copied the code wrong, it’s in the wrong location, it’s not on every page, or something is preventing it from loading.

If you go to Diagnostics within Events Manager, Facebook will tell you whether there are any issues detected with your pixel.

Another example may be if a purchase confirmation page isn’t unique to the purchase flow. For example, after completing the purchase, you redirect a user to the members’ area instead of a dedicated thank-you page. You mark that page as a purchase. Yet, users will be visiting that page regularly, inflating conversion numbers.

You may also create a custom conversion with rules that include a common URL segment. For example, maybe the URL for the purchase confirmation page of my Facebook Pixel Masterclass training is jonloomer.com/facebook-pixel/ (it’s not, but hang with me). You could set up this custom conversion based on URL rules…

You should test that your pixel, events, and custom conversions are firing properly. You can use the Facebook Pixel Helper Chrome extension and go to the pages where you expect certain events to fire… 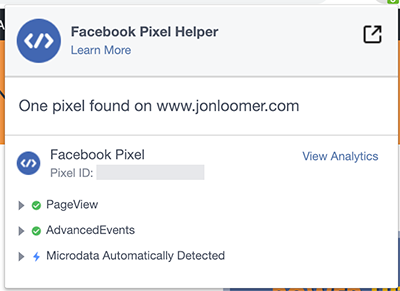 3. You Are Tracking All Conversions

When you create your ad set, you may define the purchase event as a very specific conversion — like the purchase of one product. You can do this by selecting a custom conversion. 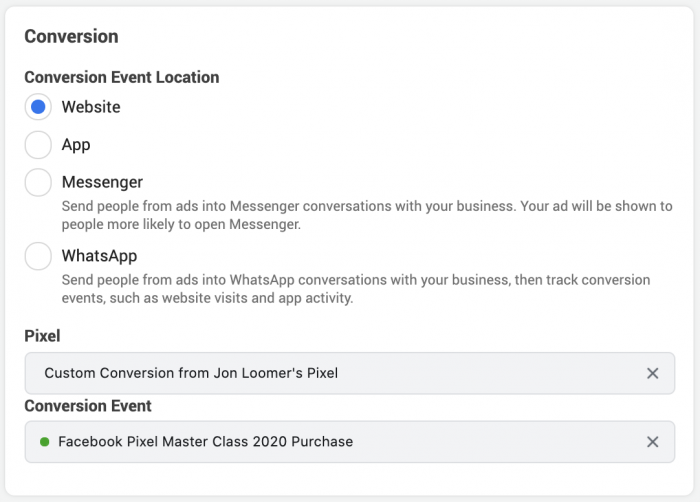 Or you may define the conversion event as the general Purchase pixel event. 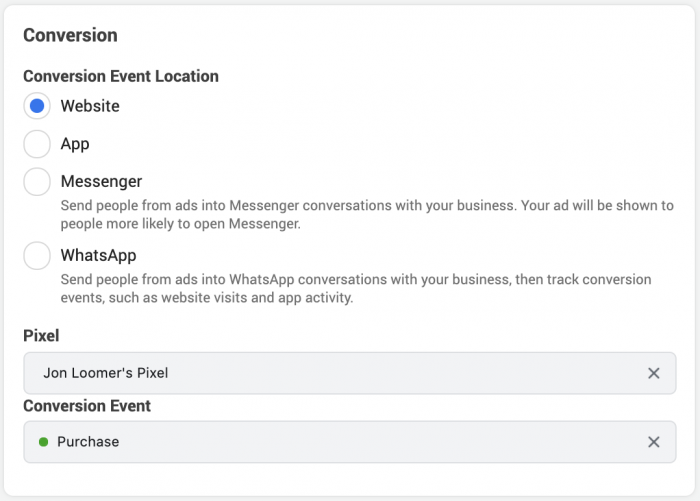 Just know that what you choose here will be what Facebook reports on by default within the “Results” column. 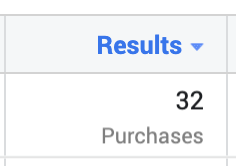 Maybe you have proof that you haven’t sold that many of the products you’re promoting during the life of the campaign. It could be that this data includes other purchases, too. If you hover over that conversion number, it will provide further details regarding the various conversion events that resulted from your ad. 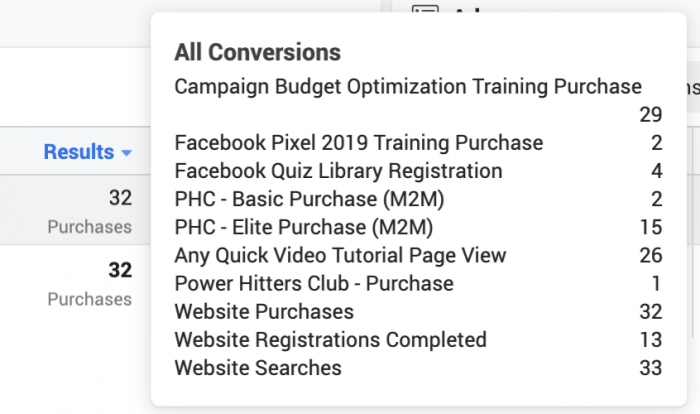 This is a big one!

I’ll often hear from advertisers claiming that Facebook’s reporting is wrong because Google reports something different. They’ve even added UTM tags to their links, “proving” that Facebook is inflating their numbers.

There’s a big problem with this assumption: Facebook and Google report conversions differently.

By default, Facebook reports a conversion when either of the following two conditions are satisfied:

Do you see the potential for different calculations now?

Someone could click your ad, visit the landing page but not convert at that moment. They may come back days later before making the purchase. While Facebook would say the conversion came as a result of your ad, Google would not report the conversion as coming from Facebook.

Additionally, someone could view your ad without even clicking it, eventually go to your site within one day and make the purchase. Facebook would say the ad contributed while Google would see no direct path from Facebook.

We can debate whether someone who clicks an ad and then converts within 7 days is a conversion. Certainly, the contribution of the ad decreases as days go on, but the likelihood of a conversion will decrease with each passing day as well.

And certainly, I understand that a view-through conversion — one where the user never clicks the ad but eventually converts within a day — may seem like a stretch. Facebook is saying that the ad contributed, even if it wasn’t clicked. And while a view isn’t as valuable as a click, I tend to agree.

Overall, though, expect the vast majority of your conversions to happen within one day of a click. You’ll get others as well. And that will depend somewhat on the audience and other ways you communicate with them.

For example, maybe you email the same audience that you are reaching with your ad. Your Facebook ad can make your email more effective and vice versa.

Anyway, Facebook’s attribution window is the cause of much of this confusion, but you can actually get a detailed look at how the conversions break down by views, clicks, and duration.

To find this information, you’ll want to customize columns… 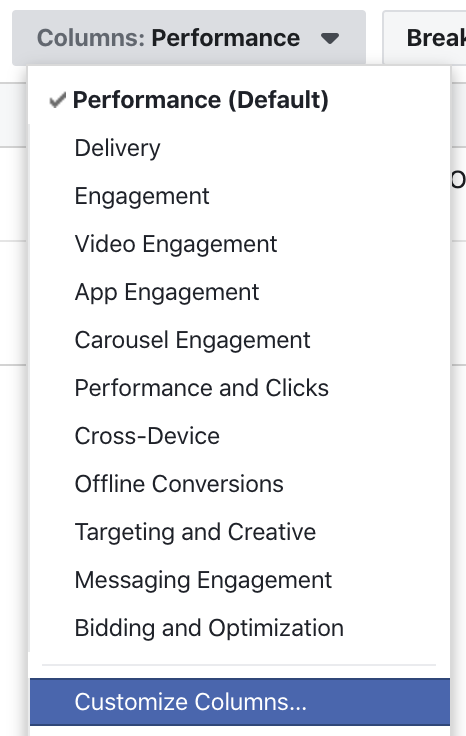 At the bottom right, click the link for comparing attribution windows.

You can then add different columns to break out durations for click and view (you may no longer see the 28-day option). 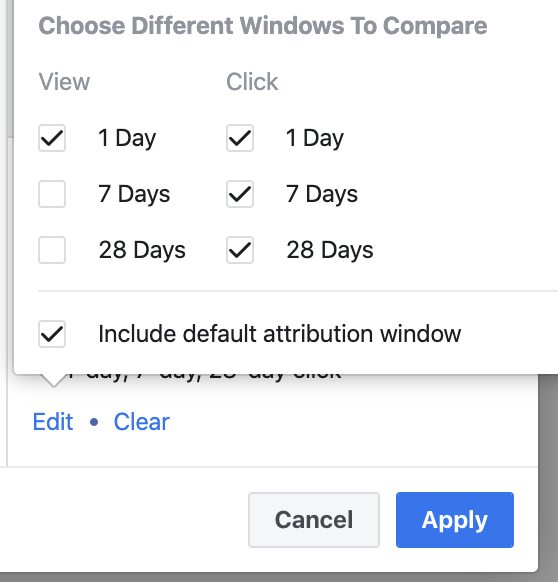 You can now add columns in your report to see how many conversions happened after a view or click (within 1, 7, or 28 days when this was written).

I’ve heard it. I get it. It makes no sense why Facebook makes very little attempt to surface organic conversions.

When you run a Facebook campaign, people are going to engage with your ad. They are going to comment or share. Other people, who weren’t targeted, may act on your ad. Facebook will not report on these conversions in Ads Manager.

Why? It would technically be misleading. Facebook is reporting on the number of actions that happened as a result of someone seeing or clicking your ad. If someone saw it organically, you didn’t pay to reach them.

This, of course, is a huge missed opportunity. Facebook needs to do a better job of surfacing this information to help you see the full impact of your post — paid or organic.

There are some things you can do, though. You can use Facebook Attribution to get a breakdown of conversions that occur paid vs. organic from Facebook (though you can’t break it down by post or ad unit).

You can also use UTM parameters to track your results in either Facebook Analytics or Google Analytics. These results would not differentiate organic vs. paid. But, you could at least get a fuller picture of conversions resulting from your efforts.

Are there any other explanations for why your conversion numbers may be off or aren’t what you think they are?